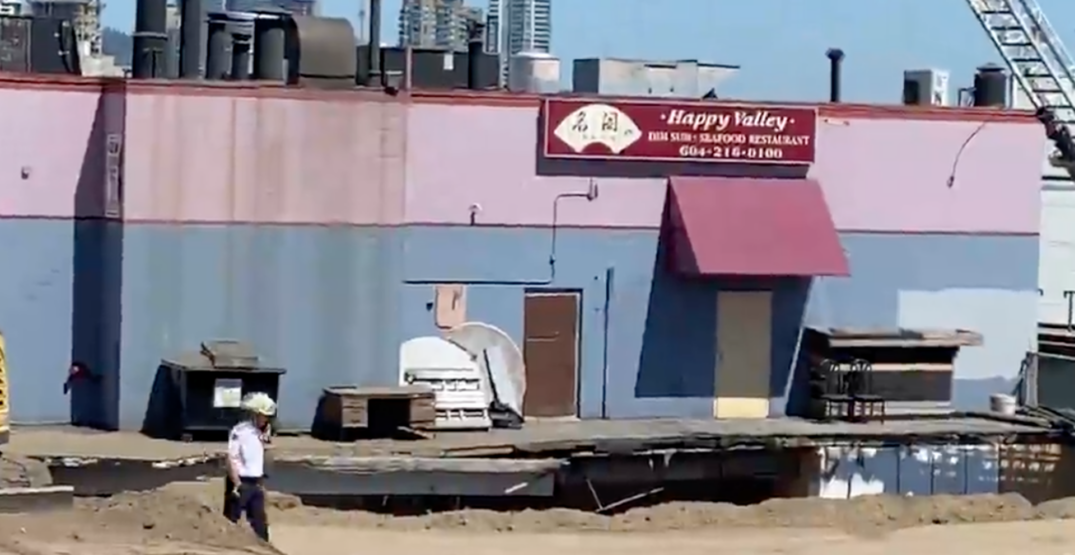 Firefighters are searching for a person who’s unaccounted for after the rooftop parking lot of an East Vancouver building collapsed on Thursday.

Brad Hesse, assistant chief of operations with Vancouver Fire Rescue, told Daily Hive that fire crews, search dogs, and members of Canada Task Force 1 were combing the wreckage of the Lougheed Highway building to try and find the person thought to be inside.

“The rescue operations are very slow because it’s a very dangerous situation with the amount of collapsed cement and beams,” he said.

Two search dogs alerted rescuers to the probable location of the missing person, and two cranes on-site were removing debris to allow rescuers to access it.

The roof collapse happened at a building on Lougheed Highway just east of Rupert Street Thursday afternoon. Hesse said some crews were operating heavy machinery on the rooftop parking lot when the collapse happened.

Video shared on social media by witness Shirley McLean shows a large yellow digger on the roof and the chasm that opened up in the cement.

“There’s big action happening at my workplace. There was an excavator digging out dirt on this platform parking lot and it has collapsed. Down below is a bakery, there could be workers down there trapped,” she said in a video shared Thursday.

McLean wrote that her office is next to the building where the roof collapsed.

Hesse said it’s not known yet what caused the collapse, and an investigation is expected.

The eastbound lanes of Lougheed Highway remained closed Friday as crews searched for the person in the collapsed building.

#VanTraffic: Due to a police incident, all traffic is blocked along Lougheed Hwy between Rupert St and Boundary Road. Please find an alternate route. pic.twitter.com/3dsxznNxvY