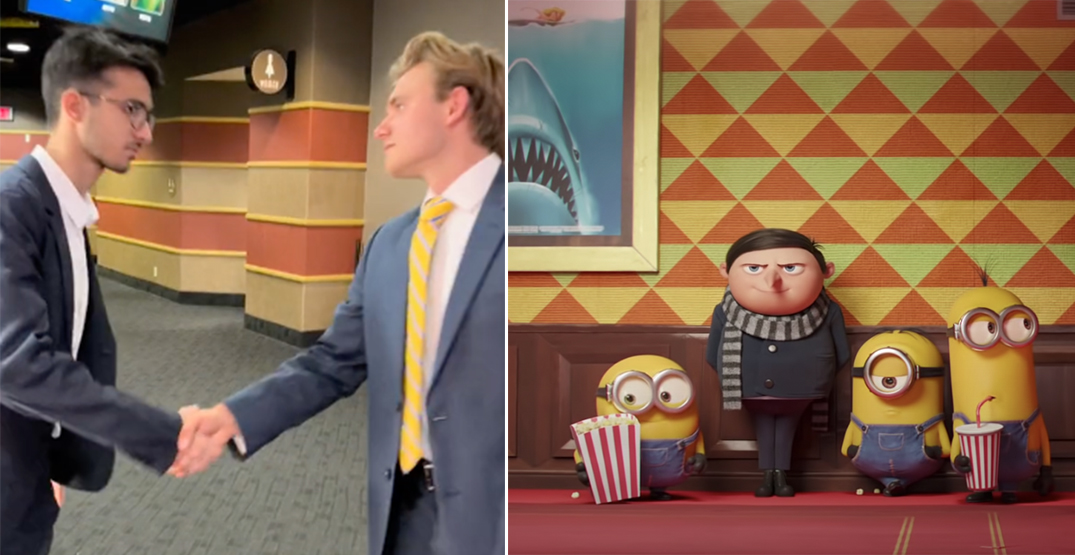 If you’ve been to a movie theatre in the last week, you may have encountered teenagers showing up in droves dressed in suits.

It’s all part of a viral TikTok trend involving the little yellow henchmen that stole the show in 2010’s animated hit Despicable Me.

Dubbed the #gentleminions trend, the latest social media craze has groups of teenagers around the world dressing up in formal attire to watch Minions: The Rise of Gru in theatres.

The TikToks are usually set to the song “Rich Minion” by American rapper Yeat and show the formally dressed crews getting hyped in the movie theatre.

There was even a gentleminions meet-up in Toronto over the weekend as seen in the TikTok below.

The latest installation in the Minions universe has already broken box office records during its July fourth opening weekend.

Could these gentleminions have had a hand in that? Maybe, but some movie theatres aren’t so happy about people playing dress-up.

One American TikTok user says they were kicked out of a movie theatre and the police were called on them for doing the trend.

“I can’t believe we actually got kicked out of a kids’ movie,” the TikTok caption reads.

The video shows fans in a mosh pit in front of the screen right before the movie started.

@skydivingaubrey i can’t believe we actually got kicked out of a kids movie. sophie crying at the end bc she just wanted to see the movie 😂. @stunkysonx101 @eyeheart.emoboys ♬ Ï CÖUNT MONEË – Twïzz

“Due to recent disturbances following the #gentleminions trend, any group of guests in formal attire will be refused entry for showings of Minions: The Rise of Gru.”

In a statement to Daily Hive, Cineplex says it’s supportive of fans’ enthusiasm over the Minions movie, and that so far, the Canadian gentleminions haven’t caused problems at theatres.

“It would be safe to say that thousands of Canadians have suited to enjoy the film on the big screen – and that’s something that we 100% welcome and encourage,” stated a Cineplex spokesperson.

“We always ask our guests to be respectful of other movie-goers in the auditorium looking to enjoy the film and so far, the #GentleMinions in Canada have done just that.”

And of course, the Minions official TikTok account has capitalized on this trend, posting a compilation of the TikToks as Bob the Minion looks out into the distance.

“Bobspeed you gentleminions,” reads the caption.

Enjoy more of the entertaining TikToks below.

If not for the Minions movie, what movie would you get suited for?