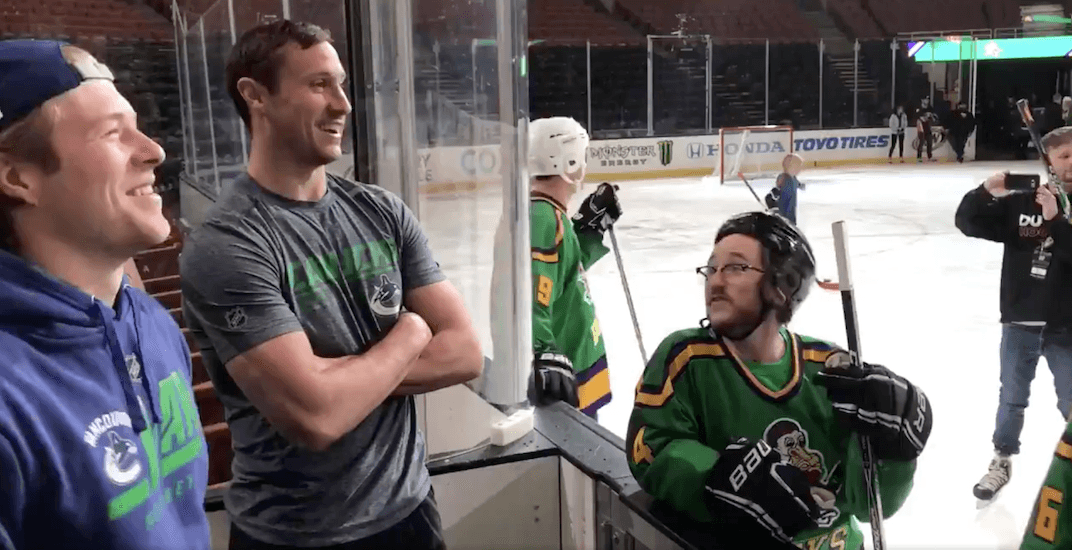 As far as theme nights go, it doesn’t get much better than Wednesday night’s Canucks game in Anaheim.

In celebration of their 25th anniversary season, the Anaheim Ducks paid tribute to the movie that gave the team their original name.

Eleven former cast members of The Mighty Ducks movies from the 1990s participated in a pre-game ceremony, capping off a pair of days going down memory lane.

A huge shoutout to the cast – and our fans – who came out to The Yost Theatre for tonight’s Mighty Ducks Movie Experience.

It was one movie night we’ll never forget! pic.twitter.com/L2FMnpgeBB

The Bash Brothers were there, as was Julie “The Cat” Gaffney.

Even Adam Banks showed up!

Canucks players were starstruck, meeting the cast at the player’s bench before the game.

Max Doherty, who played Lester Averman, was there. He’s still got the glasses, but he’s 40 now.

“If you’re up three goals tonight, you have to do the Flying V, k?” – Averman #Canucks meet the cast of The Mighty Ducks. pic.twitter.com/6yQx73z8HD

“If you’re up three goals, you can do the Flying V,” Doherty told Canucks players. “That’s the rule.”

It wouldn’t be a Mighty Ducks Movie Tribute Night without one!#LetsGoDucks pic.twitter.com/JACDB0Eyi1

Unfortunately for the Canucks, the Anaheim Ducks — who came into the game looking like a bunch of District 9 scrubs — left with a 1-0 win. Kevin Boyle, who was playing in his first NHL game, looked like Goldberg playing the evil Hawks in the title game.

Or was their head coach Gordon Bombay?

Too bad the game didn’t go to a shootout or we may have seen someone bust out the triple deke. Or maybe the knuckle puck.

Couldn’t be happier hanging with this crew! @anaheimducks many many 🙏 Reliving some childhood memories can’t be beat! pic.twitter.com/izCrZDGhpv

When the Walt Disney Company was awarded an NHL franchise, naturally they chose The Mighty Ducks of Anaheim as their name. The franchise dropped the “Mighty” in 2006, changing their name to the Anaheim Ducks.