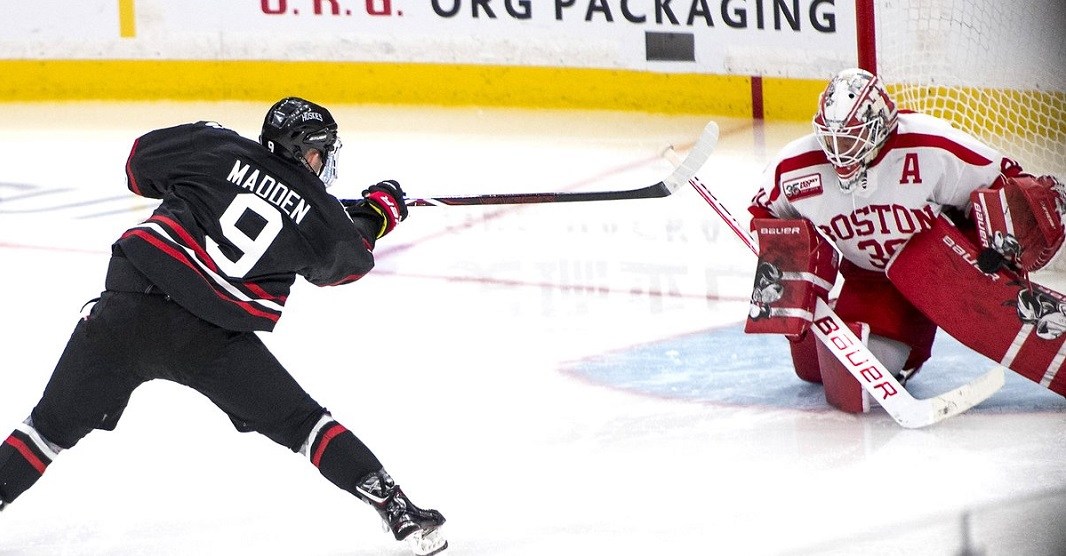 As Tyler Madden’s breakaway shot in overtime of the Beanpot semi-final trickled past the goal line, the snow angel celebration that followed was an amusingly accurate symbol of how his season is going.

Yeah, it’s been fun times for the Canucks prospect and his team, who will play in the Beanpot final on Monday for a second straight year.

Now, Madden is getting a chance to defend that title.

So just how strong has Madden’s first season with Northeastern been?

Think back to the 2015-16 season when the hype was starting to build around Adam Gaudette, who the Canucks drafted in Round 5 of the 2015 Draft.

Gaudette scored 30 points in 41 games at Northeastern, an impressive total that put him on the radar as a legitimate prospect.

We heard @NUHockeyBlog was looking for a GIF, so we have no choice but to oblige | #HowlinHuskies pic.twitter.com/slFmx810X0

Madden – a third-round pick (68th overall) in the 2018 draft – is well above the pace set by Gaudette, clicking at nearly a point-per-game pace right now with 22 points in 23 games.

More impressively, the 5-foot-11 centre from Florida is leading his Northeastern team in scoring as a 19-year-old, whereas Gaudette finished fifth in his freshman college season. 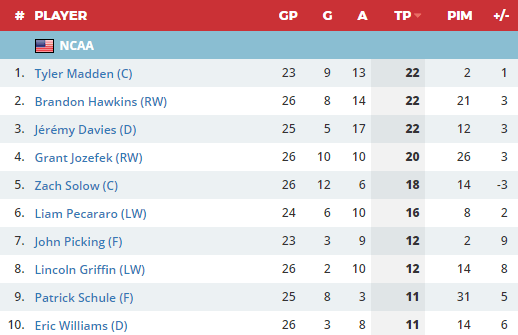 Looking at some of the other 2018 draftees in the NCAA this season, it seems clear that Madden would go much higher if the draft was redone today.

He’s currently seventh in both NCAA scoring and points-per-game rate among all U20 players.

Compare his season statistically to guys drafted in the first round like Oliver Wahlstrom (13 points in 23 games), Joel Farabee (24 points in 25 games), and Jay O’Brien (four points in 18 games), and the case can be made that Madden could be a first round pick in a redraft.

Somewhat surprisingly (considering his lack of hype before this season), Madden made Team USA at the World Juniors in Vancouver and was one of their most relied-on players by tournament’s end.

He finished tied for third on USA with three goals and had an assist as well, winning the silver medal while playing important minutes throughout the tournament.

USA coach Mike Hastings praised Madden for his competitive nature as well as his utility as a player, making it easier for the coaches to assemble lineups.

It wasn't immediately called a goal, but @Canucks draftee Tyler Madden (@GoNUmhockey) knew this one was in the back of the net.#WorldJuniors pic.twitter.com/72MlB7AWNp

Madden’s great season to this point will undoubtedly have Canucks fans excited to see him sooner rather than later, but patience will need to be practiced here.

After all, Madden is still listed at only 150 pounds, and another college season or two makes sense to get him physically ready for the pro scene.

That would be in line with the same plan used for Gaudette, who played three full seasons at Northeastern before jumping to professional hockey.

There is plenty to like about Madden’s skill set though.

Offensively, he is a threat in a multitude of ways. He’s got great hands and speed, and is an equal threat in both distributing and shooting the puck.

He also has a knack for deflecting pucks, a skill that could prove handy on a future Canucks power play.

#Canucks prospect Tyler Madden's goal from tonight – comes out of the corner and tips the shot-pass perfectly pic.twitter.com/OAMJokPYLr

In Gaudette, the Canucks seem to have found a gem in the late rounds of the 2015 draft. Three years later, the team’s USHL scouting staff may have very well found an even shinier jewel in Madden.