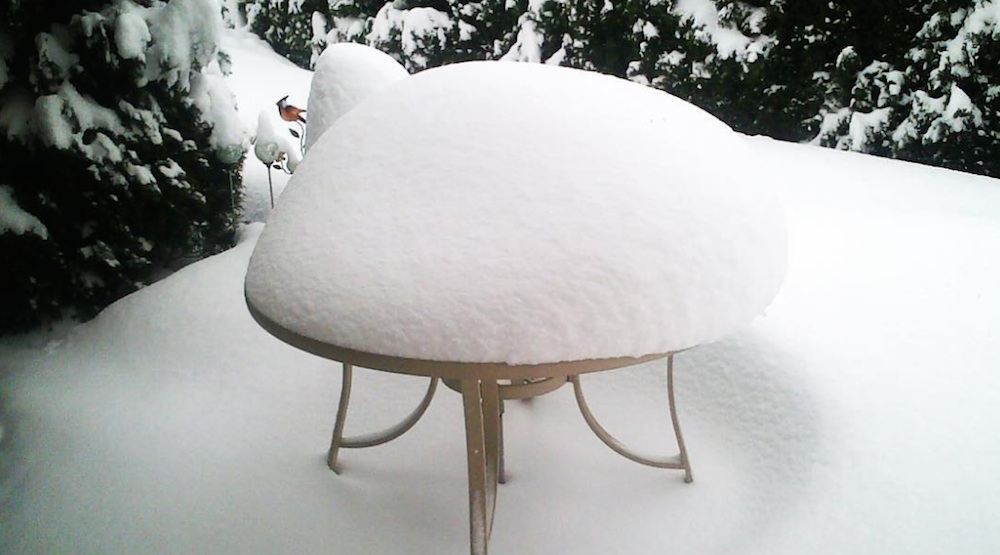 Snowfall accumulations across the Lower Mainland since Friday morning have varied anywhere from 22.6 cm at Vancouver International Airport to 70 cm in Chilliwack, according to Environment Canada and The Weather Network.

There were even confirmed reports of lightning over Richmond during last night’s snowstorm, and the weight of the snow also caused thousands of BC Hydro customers across the region to lose their power.

For most areas in Metro Vancouver, the snow stopped falling at around midnight, and conditions are expected to hold throughout the day with only a few flurries. However, heavy snowfall is expected to return by Monday morning, increasing during the morning rush hour, and continue through Tuesday.

No significant accumulations are expected in the western half of Metro Vancouver until tomorrow, but the eastern municipalities could experience more accumulation. At this time, Environment Canada expects 5 cm of new snow will fall at YVR during the daytime on Monday. As usual, larger accumulations can be expected for areas further away from the warming influence of sea water and on higher terrain.

However, up to another 6 cm is in the forecast for Abbotsford throughout Sunday, and an Environment Canada snowfall warning remains in effect for Chilliwack where between 15 cm and 20 cm is expected.

Within Metro Vancouver, the chance of snowfall continues daily through Thursday.

TransLink says its articulated buses have been changed to 40-foot buses, which provide better traction in the snow, for routes 49, 95 B-Line, 96 B-Line, and 99 B-Line. As well, some buses running on routes 3, 8, 10, and 20 have been switched from electric trolleys to 40-foot diesel buses.

At this time, there are no major delays to any of the three SkyTrain lines.

As for conditions at Vancouver International Airport, many flights – both arriving and departing – were delayed on Friday and Saturday. A number of flights are also delayed this morning.

Flight cancellations have only been made to short-haul regional flights using small aircraft to destinations in BC, Alberta, and Washington State.

However, two major flights last night from Hong Kong and Calgary were rerouted to Sea-Tac International Airport due to poor runway conditions at YVR. Airport ground crews worked around the clock to clear runways and taxiways, but within minutes cleared pathways were covered with a new layer of snow.

Snowing. In February. In Vancouver. No way!

Another snowy shot from today.

Hungry mob! American Coots, Green-winged Teals, Mallards, Canada Geese, & Lesser Scaup eating up our seeds. We also fed the songbirds then the crows cleaned up any that remained. Love this spot!

Finding consolation on the snowy trails after the cancellation of this weekend’s First Half half marathon. Disappointed that I won’t be able to test myself after all this road running. But at least I can finally switch gears and start focusing on next month’s Chuckanut 50k a week early. 📷 @aulafreniere

Feb 4th 2017 opening day @ Bolivar Park Groundhog League. It was an adventure to get to the park in the morning but the day turned out to be really fun in 20cm+ of fresh snow. #sandlot #snowlot #bolivarpark #SPN #saturdaystillballin #surrey #slopitch #softball #vancity #604now #vancitybuzz

A photo posted by ElyseAnna Photography (@elyseanna_photography) on Feb 4, 2017 at 8:20pm PST