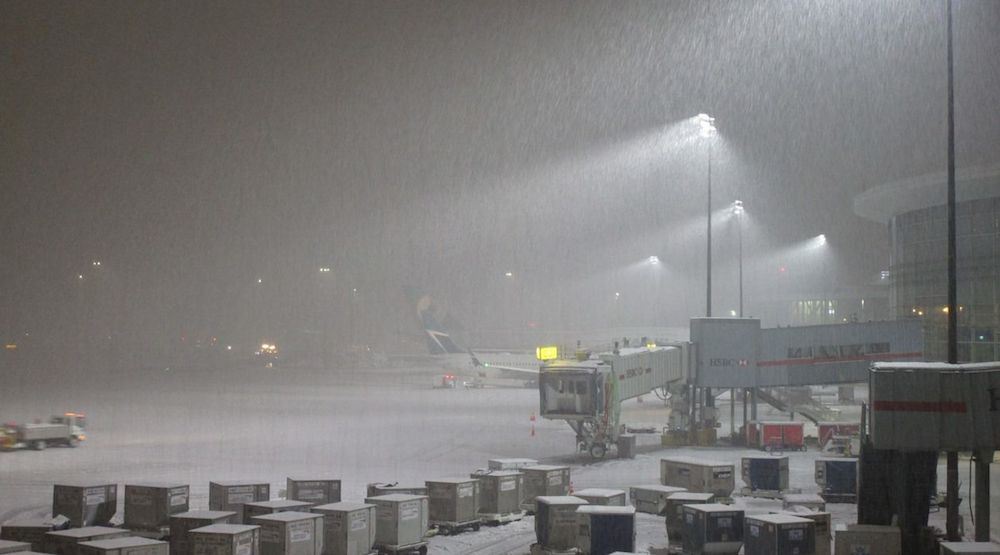 @DJIlios We are experiencing some interesting weather tonight with snow and electrical activity. Everything is still running as normal.

One lightning bolt in North America last hour and it hits a plane? What are the odds #YVR? (Planes often hit with few or no problems) pic.twitter.com/k0SdaGDoh4

As well, ground crews at the airport are working as fast as they can to clear snow and ice from the runways and taxiways, but they have not been able to keep up with the high rate of accumulation. Cleared surfaces are covered with a new layer of snow within minutes.

According to crews, poor runway conditions including at least one incident of a missed approach have resulted in to two diversions of major flights to Sea-Tac International Airport in Seattle:

Both flights plan to return to YVR as soon as they can as the thunderstorm cell over Metro Vancouver has moved on, and before another cell moves in.

Most flights arriving and departing YVR today have been delayed due to the poor weather conditions. Flight Aware’s tracking data indicates there is an average departure delay of 46 minutes from the airport.

According to The Weather Network, as of 10 pm Saturday, approximately 21 cm of snow has been recorded at Vancouver’s main weather station at the airport. Snow is expected to continue to fall overnight through late Sunday morning.