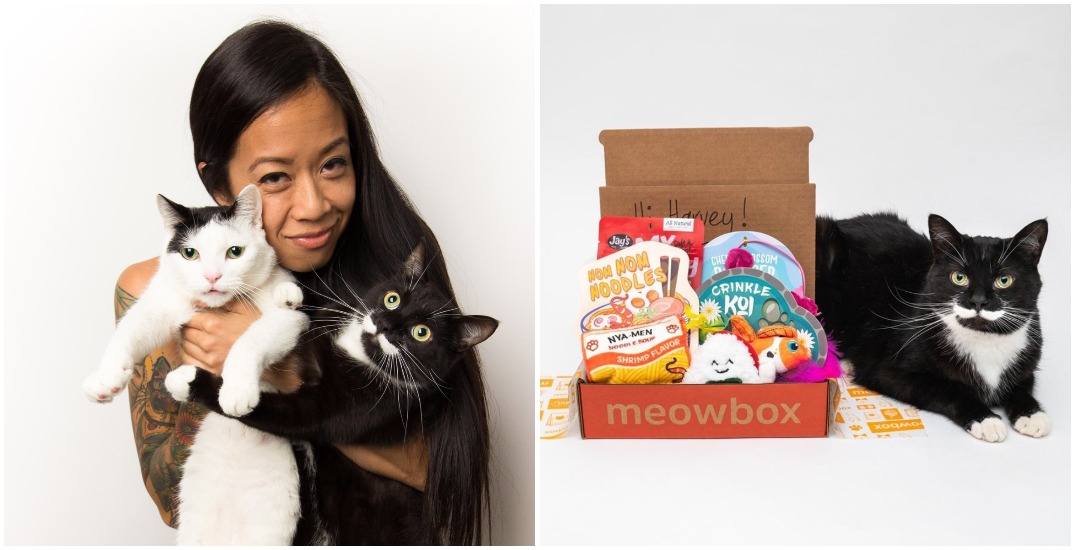 There are subscription boxes for makeup, book clubs, and dogs — but there should be one for cats.

That was Olivia Canlas’ idea back in 2013. Today, she is the CEO of a cat subscription box company called Meowbox.

Canlas was looking for a box subscription for her cat — which turned into a purrfect business idea for her to start in her Vancouver basement suite that has grown into the multimillion-dollar company it is today.

Meowbox is a subscription box dedicated to cats, including toys and treats delivered to the fur parents’ doorstep. 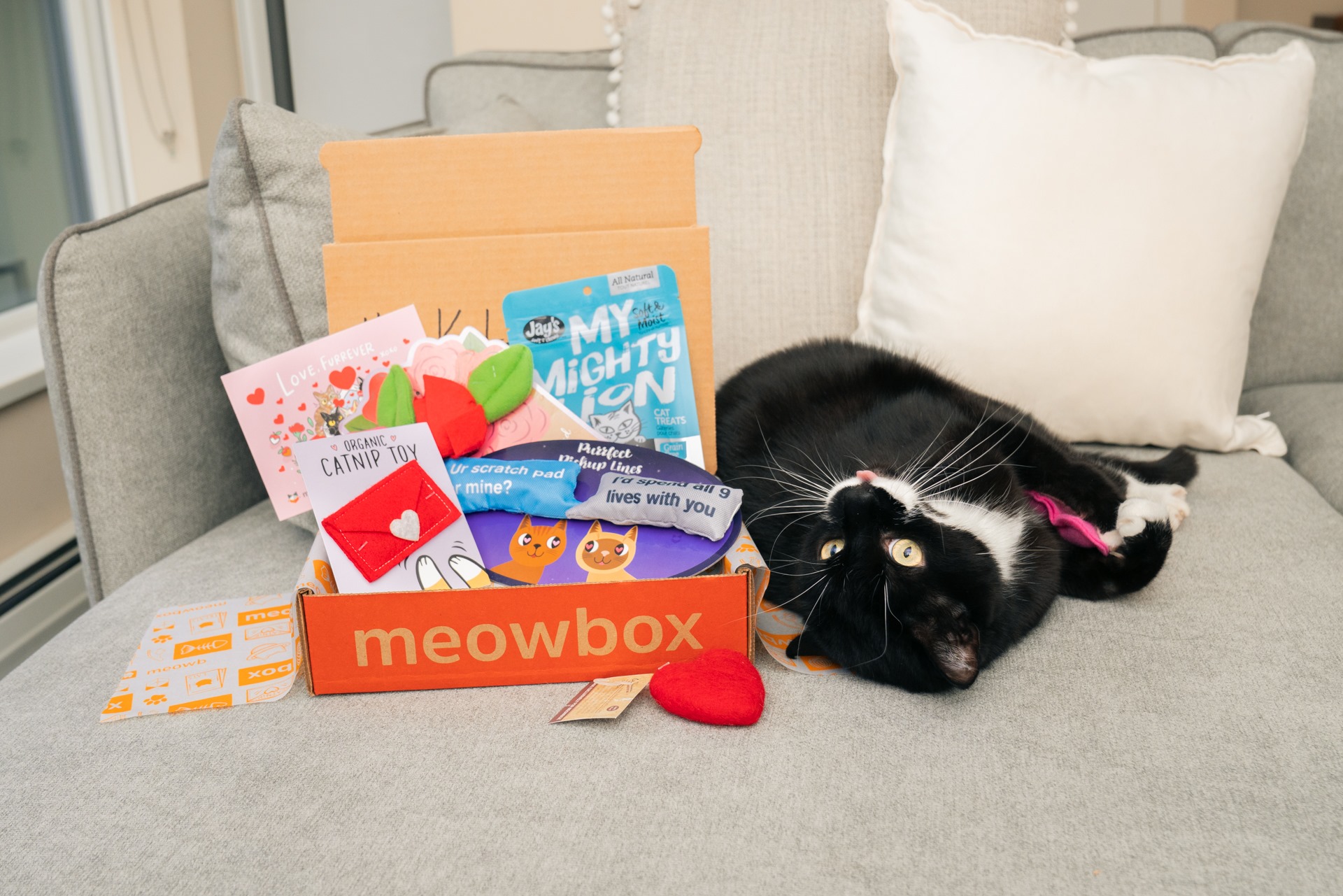 Meowbox designs many of its toys and has them manufactured overseas, but it always includes at least one toy from a local business.

Subscribers can also feel good about ordering a box for their cats because for each package purchased, Meowbox will contribute to a shelter to help animals in need.

Before launching Meowbox, Canlas had a desire to create her own business and work for herself. “Being an animal lover, and coming across this sort of gap in the market, I was super excited, and I knew this was my opportunity to create something really cool,” she said.

At the time, Canlas worked as a dental assistant and had taken a small business-management certificate program.

“I was like, ‘Okay, I want to get a bit of knowledge,’ but honestly, experience is the best form of education when it comes to entrepreneurship and small business,” she said. “It was the drive that pushed through all the exploration and learning to start a business.” 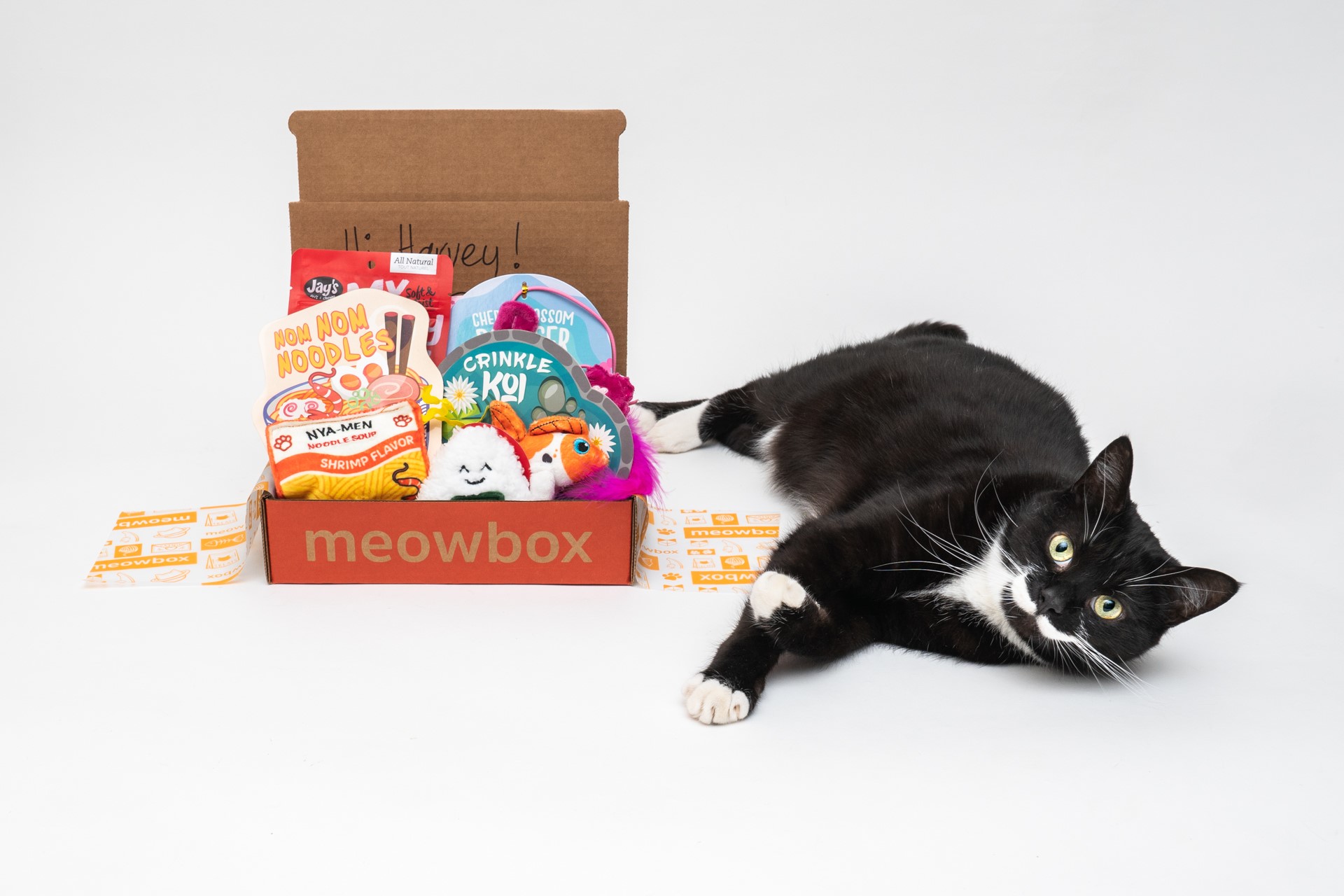 Canlas partnered with co-founder Francois Deschenes, and with his software design background, the two worked on creating the website and found products to use before selling the first subscription box at the beginning of 2014.

Around six months later, it was getting so busy with customers that Canlas decided to quit her full-time job to continue building the business and hiring staff to fill positions for social media and customer service roles. “Eventually, I was like, ‘Okay, I can’t [be a] dental assistant anymore. It’s full-time Meowbox,'” she said.

“Instagram was booming, so that was one of the ways we really reached people… and we had that on our side, the fact that we could post cute cat photos and relate it to our products,” she said about the account, which has more than 740,000 followers today and counting. 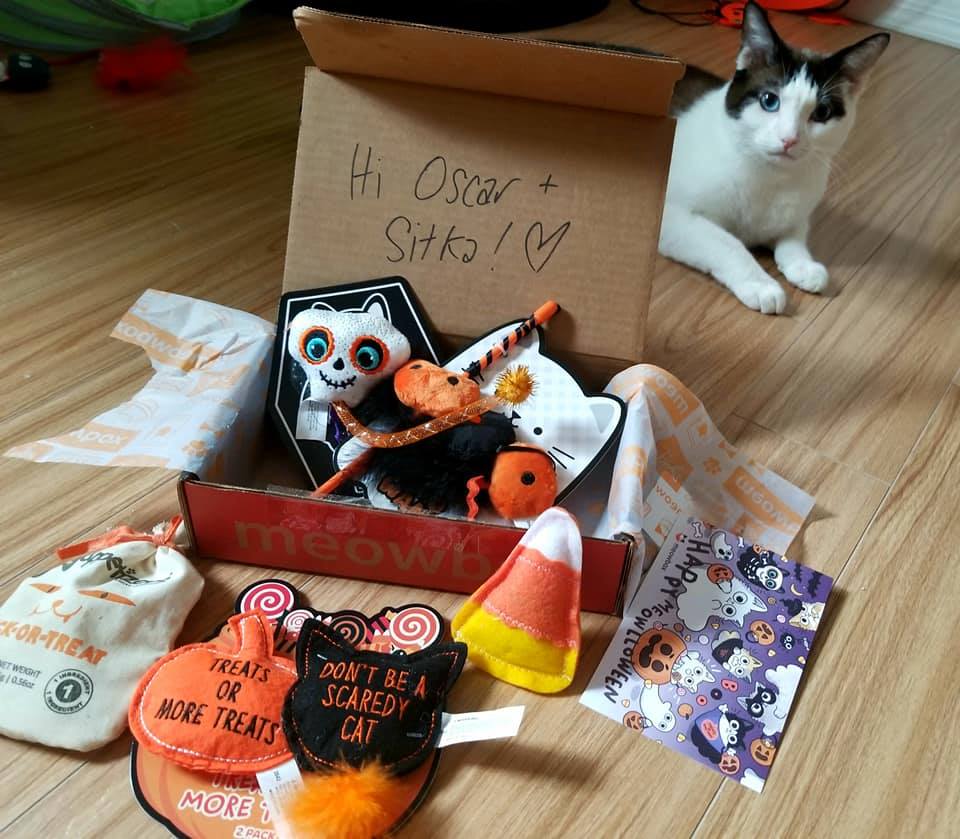 Trial and error is how the two developed the company, Canlas said. “Seven years of gathering feedback and information about what our customers like, what cats like, what works for the business, what are the best prices and margins and stuff like that.”

Canlas said she wished she had begun sooner.

“I wish that I had surrounded myself with other entrepreneurs, other women in business, and had that sort of support system and resources available to me, so that made it harder.”

If you want to start your own business, Canlas advises, “Make friends with other people who are doing the same thing as you because you’re all going to have the same challenges and it makes it a lot easier to solve them when you can ask each other, ‘Okay, what did you do? What should I do?'”

Canlas and her friend Selene Dior, founder of Vitae Apparel, have also started a private Facebook group called the Women in Business Startup Club. This page is to help connect female entrepreneurs so they can give each other advice, ask questions, and share stories. 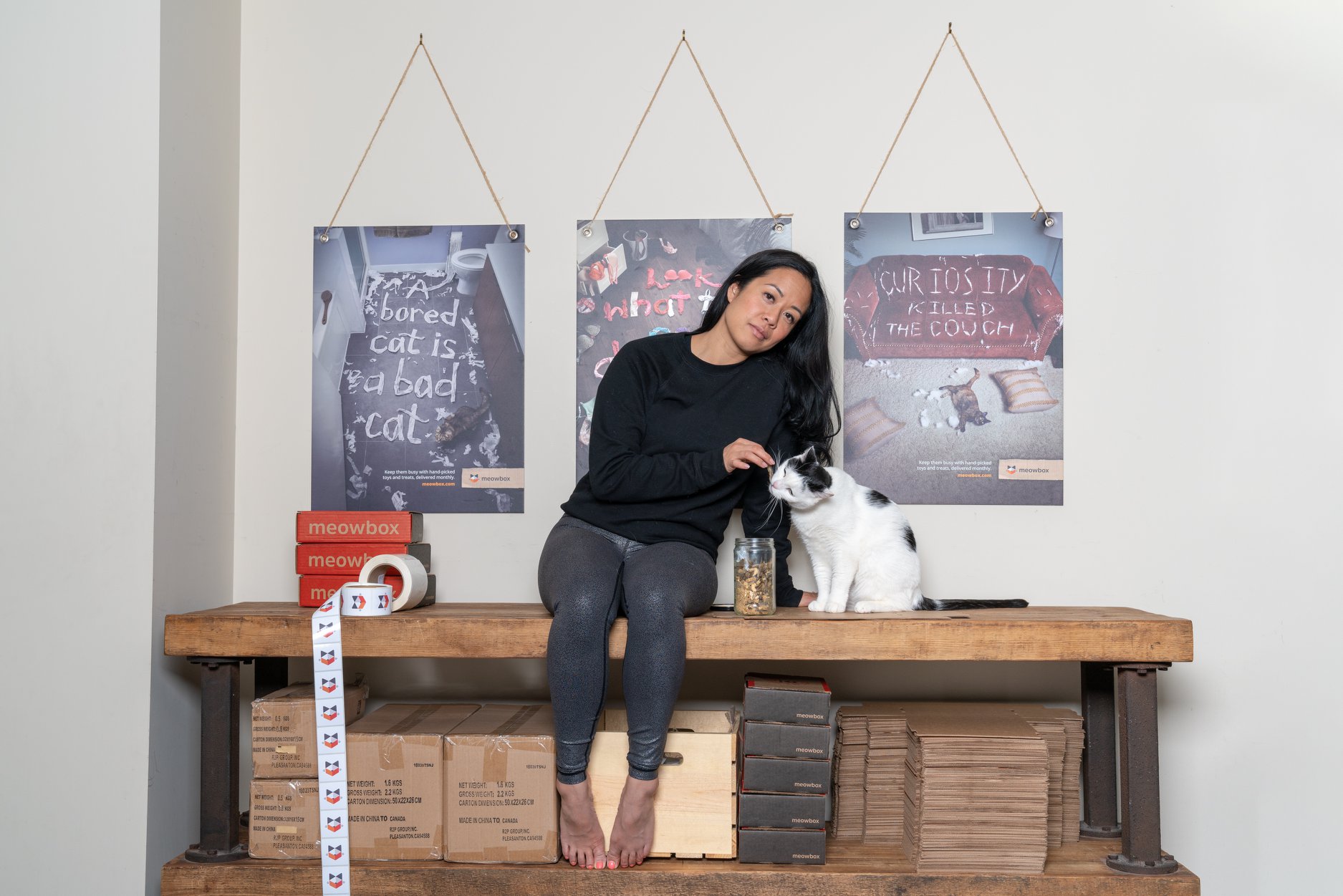 Canlas’ team has grown to include about 20 members. “We’re nimble still, which I think is important to be as much as possible, even when you’ve grown quite a bit, you don’t want to have to wait to make changes,” and they all come together as a group to discuss toys and packaging.

“Most of [the team] are cat parents, so I like to get feedback from everyone, and so we get well-rounded and interesting ideas because we’re still able to gather feedback from all of us. It’s not just two of us making executive decisions,” Canlas said.

“Feedback from customers, combined with opinions from our team, being able to move quickly… I think it has made it so that we can continue to improve where we know we need to improve.”

Canlas said it also gives her the “warm and fuzzies” when she thinks about all the boxes that have been shipped and delivering “happy cat moments” for pets and fur parents across Canada and the US.

Zac and Harvey are the office supervisors and are very proud of the team’s hard work, Canlas added. 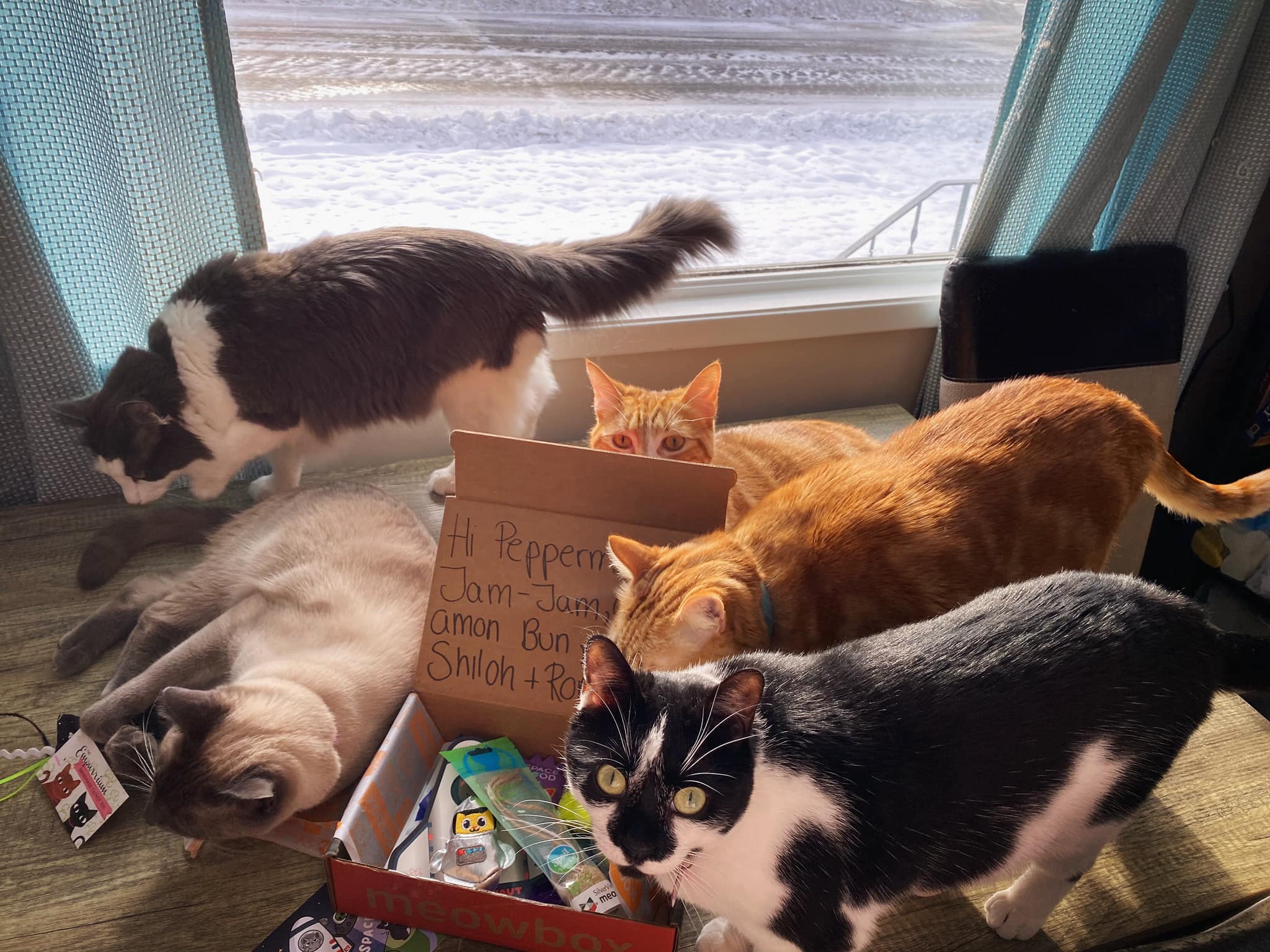 By creating Meowbox, Canlas said she learned that whatever you’re doing within your business, make sure it aligns with what makes you happy and your values.

“In general, I think when you’re running your business, you want to lead with your values. That will reflect in the happiness of your team, of your customers, and yourself, so I think that’s one of the benefits and privileges that you have as a business owner,” Canlas said.

Canlas said to keep an eye out because Meowbox is finding ways to reward loyal customers with a new program.

Meowbox is also hosting Meowfest 2022, a festival for cat lovers to come together to support non-profit animal organizations and shelters, with presentations, shopping, speakers, adoptable cats, celebrity cats, entertainment and more. You can stay up to date with event details on its website.