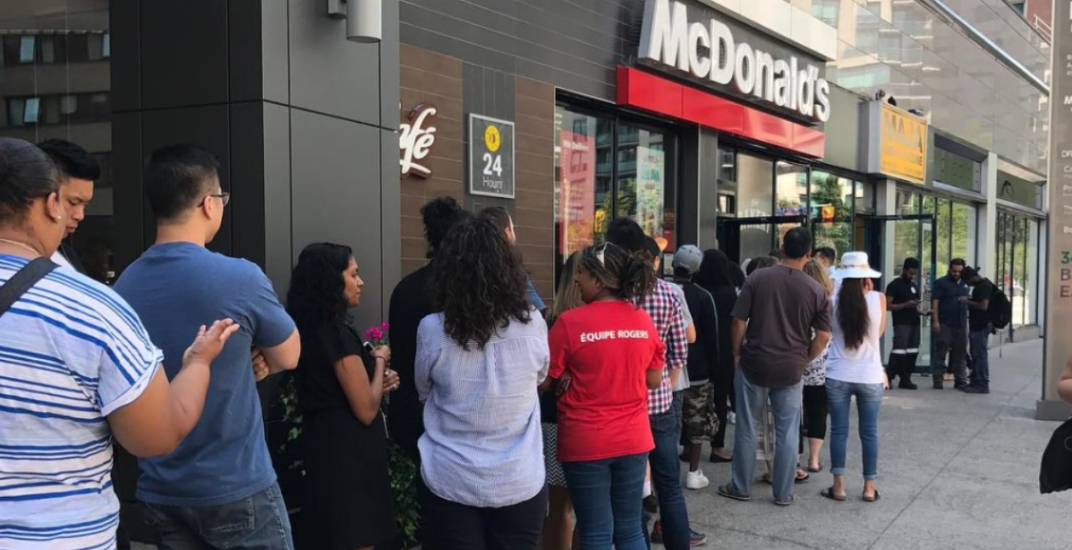 McDonald’s Canada is celebrating 50 years in Canada today by rolling back the prices to just 67¢ for its iconic hamburgers.

The promotion, which kicked off at 11 am and continues on until 7 pm tonight, limits each customer to just three burgers each, but that hasn’t stopped Canadians from turning up in full force, lining up out the door, and bringing a whole party to help amass mountains of beef patties.

You didn’t really think you were going to get 67-cent #burgers from #mcdonalds without having to wait three hours, did you? #food #comfortfood #mcd #foodporn #yum #Wednesday #wednesdaywisdom #mcdonaldsbreakfast #ilovefood #toronto #torontofood #torontoeats

Update: lineup is out the door, as expected. 12:30. Start the clock. pic.twitter.com/jY3JdwJc9N

17 hamburgers lol. McDonald’s Made more money with 67cent prices than regular they made more than 100$ in like 5 mins lol #mcdonalds50th

67 cent burger! Thank you McDonalds for being around for 50 years in Canada. 🇨🇦 🍔 (I hope this burger won’t prevent me from staying around for that long!) #McDonalds50th

Thanks to @McD_Canada‘s 67-cent burgers today, I can now afford a mortgage since I didn’t go out and blow $15 on something with avocado

Of course, not everyone was McLovin’ this promo.

What 67 cents gets you #mcd #67centburgers

WTF…. are you kidding me, that freakin line just for the 67cents burger at McDonald…no way, you can have your Burger 🍔…

Lineups around the block for 67 cent McDonald’s burgers in downtown Ottawa. It’s amazing how little value people put on their time.

Y’all I’m crying I went to McDonald’s bc in Canada they’re selling 67 cent burgers and they gave me this IM CRYINGGGGGG pic.twitter.com/JGsqpTYbbx