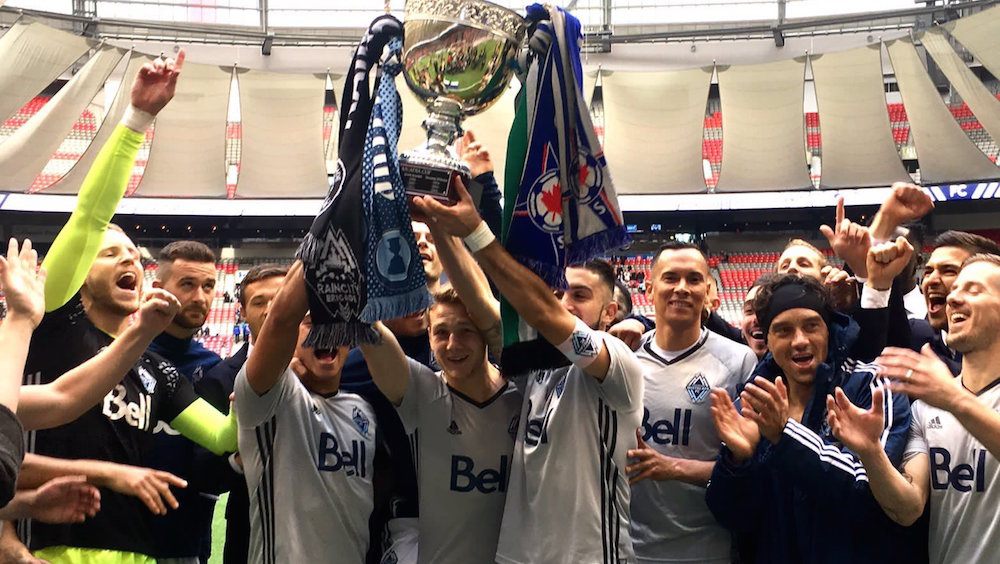 Question: who were those Whitecaps, and where were they three months ago?

After being eliminated from the playoff race several weeks ago the Whitecaps finished the season on a high note defeating the Portland Timbers by an impressive score of 4-1.

In the process the Whitecaps won their sixth Cascadia Cup, and eliminated Portland from the qualifying for the playoffs.

“I asked the players to put on a performance for the fans and try and get those three goals back to win that trophy for the supporters,” said Whitecaps head coach Carl Robinson. “In the end we got what we deserved, which was a very, very good performance.”

Missing the playoffs this year is a step backwards for the Whitecaps, but winning the Cascadia Cup is a silver lining to a season in which there have been relatively few moments to cheer about.

Vancouver got out to an early lead against Portland thanks to two first half goals from newcomer Giles Barnes. The goals were Barnes’ first for the team since joining the Whitecaps in the summer.

Portland rarely threatened David Ousted in the Vancouver goal, and their best chance of the entire afternoon came in the 20th minute when Lucas Melano missed the open goal from point-blank range.

Had the Timbers scored at that point in the match things may have turned out very differently.

The Whitecaps went on to score three more goals before it was over, and most importantly they managed to prevent Portland from clawing their way back into the game.

Missing the playoffs is more significant for Portland than it is for the Whitecaps. Less than a year after winning their first MLS Cup, Portland will not get a chance to defend their title in the playoffs.

2. Them be fightin’ words

Earlier this week things got a little heated at a Whitecaps training session.

Goalkeeper David Ousted accused Pedro Morales of having “checked out”, and a brief altercation ensued.

Before it was over, the fiery Danish ‘keeper managed to land several verbal punches and finally challenged Morales saying, “if you want to fight, how about fighting on a <expletive> Saturday?”

Was this an attempt by Ousted to motivate Morales? Or did his patience finally run out with Vancouver’s highest paid player, who has been largely ineffective all year long?

We may never know, but against the Timbers there were signs that the old Morales was back. The Chilean’s passing was crisp and accurate, and he had a dangerous header stopped shortly before halftime.

Morales’ biggest impact of the afternoon came in the 54th minute when he smashed home a brilliant shot from the top corner of the 18 yard box to increase Vancouver’s lead to 3-0.

There has been much speculation that Morales may not be coming back to the Whitecaps next year. If this is the case, then at least the Chilean Maestro went out on a high note.

After recording their worst season since joining MLS in 2011, change is in the air for the Whitecaps.

2015 was a record breaking year for Vancouver and there was plenty of optimism that the team had finally assembled the pieces to become a legitimate MLS heavyweight.

This year, however, the Whitecaps struggled all year long, and plummeted down the standings in the final third of the season.

It's great to see #WhitecapsFC playing so well, and especially against Portland, but where the hell has this been all year? #differentteam

In less than a year the Caps went from a dynamic and exciting team to watch, to a team that was often undisciplined and lacked the offensive flair that made them a joy to watch since Robinson took charge in 2014.

The big win over Portland was a great finish to an otherwise dismal season, and was perhaps a revival of the 2015 Whitecaps that showed so much promise.

Any way you look at it, Robinson faces a long winter of tough decisions as he plans and reshapes his squad for 2017.