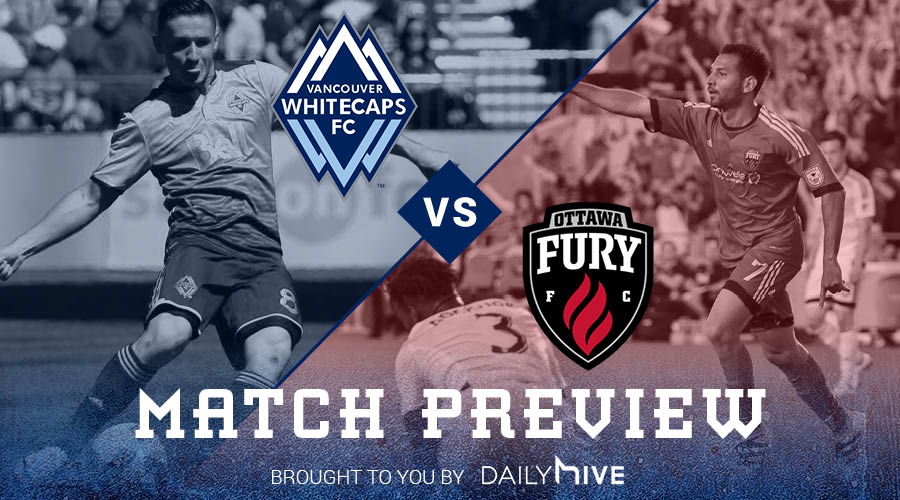 It wasn’t supposed to be like this. Well, all right, maybe it was. #PlayTheKids isn’t without its drawbacks and, well, conceding two goals without scoring at least one in return is one of them.

That said, when you’re the defending champion of the Voyageurs Cup, you get the lower-league opponent to start things off and are expected to make the most of it. The Whitecaps didn’t. They must now climb out of a two-goal hole and avoid conceding a vital away goal if they have any designs on repeating as champions.

No internationals? No problem

It turns out you don’t necessarily need your worldly players if the existing cast will do just fine. For the Ottawa Fury, their players’ performance from the first leg was more than just fine. It was downright spectacular.

I wouldn’t necessarily call a 2-0 loss “doom” per se, though it’s a heap of trouble worse than a 1-0 loss. Between Steele and forward Paulo Junior, former Whitecaps ended up being the bane of the current Whitecaps. If you feel a slight stinging sensation, that would be heaps of salt being shaken into your wounds.

Needless to say, allowing known quantities to have that kind of impact two matches in a row is inexcusable. There should be zero surprises for the Vancouver Whitecaps now from the previously-unknown Ottawa Fury. Everything has been laid on the table; failure to act on that information will only lead to disaster.

Caps have 3 shutouts and 27 goals conceded in 16 games. Can they keep it clean Wednesday? If not, they’ll need 4. Can they score 4? Maybe.

And make no mistake – losing on aggregate is unquestionably a disaster.

Adding Laba is a no-brainer. First and foremost, having a bullying midfield presence to add some bite to the centre of the field and shield the back-four is a must when pushing for a comeback. Secondly, Laba has a history of timely goals in this competition, having banged home the game- and series-winning goal against FC Edmonton in 2015.

To be clear, nobody will be putting the goal-scoring load squarely on Laba’s shoulders; still, if you need a heroic goal, why not have somebody on the field who’s done it before?

The insertion of Morales harkens back to my preview of the first leg, where I mused how excited the young players would be to have the Chilean maestro feeding them all game long. Without Morales, that never materialized and the offence was anemic: eight shots, only three on target.

Fast forward to the second leg and you suddenly have a player who, in theory, should be ripping apart the Ottawa defence with killer through-balls. With a roster boasting Morales, Nicolás Mezquida, and Marco Bustos, there will be no excuses for not generating enough attacking chances for the second straight match.

Finally, there’s the Great Dane. Ousted saw only one match in last year’s Voyageurs Cup, the final against Montreal. The rest of the way, backup ‘keeper Paolo Tornaghi guided the ‘Caps through the tournament, proving he can still compete at this level.

That said, Tornaghi is no Ousted. We know what Ousted can do: steal a game with mind-blowing saves.

He may very well have to if the attack sputters, or if preserving the clean sheet is still a top priority.

The best of the rest

With all that said, who slots into the rest of the positions on the field to give the ‘Caps their best chance of succeeding? At this point, we have to put #PlayTheKids to one side and put the best available roster out there. Meaningful developmental minutes are all well and good – goodness knows I’ve advocated for them ad nauseum – until you’re down two goals coming home.

You don’t add three players to your roster and not start them, so Laba, Morales, and Ousted are locks. I didn’t see enough negative from the Tim Parker-Cole Seiler pairing to warrant breaking them up, so they stay in my lineup. There’s a chance Carl Robinson disagrees with me and puts midfielder-turned-defender Andrew Jacobson next to Parker, though, so watch for that. As for Jordan Harvey, one hashtag: #JordanHarveyGoalMachine

Russell Teibert has enough pace and tenacity to keep hounding Ottawa, so he starts next to Laba. The difference this time is having the twin playmaking threats of Mezquida and Morales won’t put the burden of jump-starting the attack on the Canadian’s shoulders. Teibert just has to do the “yappy terrier of the midfield” routine he’s done so well in the past and the attack will take care of itself.

Many of  you will balk at the selection of Octavio Rivero. I’m of the mindset that a DP-level striker had better be playing for you in must-win, high-stakes games or else he’s surplus to requirements. He’s pulling down a hefty paycheque for a reason; with Cristian Techera capable of drawing defenders away, there’s no reason Rivero can’t impose himself on the Ottawa backline.

And if he can’t? Well, the bench still has Kekuta Manneh, Erik Hurtado, and Alphonso Davies on it, so surely one of them must be able to pot a goal or two, right?

4-1 Vancouver (4-3 on aggregate). Even if Vancouver’s big guns respond to the challenge and come out firing, there’s still the minor issue of the subpar defence. As key as it is to not concede a goal, I can’t foresee the Whitecaps defenders keeping a clean sheet. I can foresee the forwards banging in a few goals, though, and you have to think the floodgates will open after one or two go in. That’s the hope, anyway.