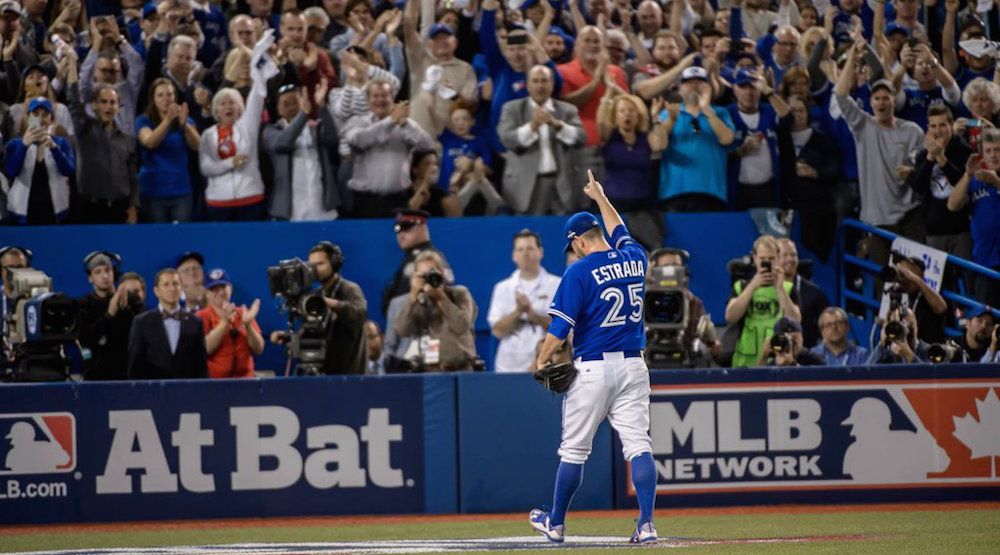 The Oakland A’s signed Marco Estrada to a one-year, $4 million contract on Friday, marking his official departure from the Blue Jays to close out a four-year tenure in Toronto.

He battled injuries in 2017 and 2018, but in 2015 and 2016, Estrada went from relative anonymity to a household name in Toronto. Estrada’s legacy as a Blue Jay will always be his ability to pitch like an ace on the grandest stage, under the biggest lights.

John Gibbons walks out to the mound to make a pitching change. He takes the ball from his starter, Estrada, who weaved his magic through 7.2 innings against the Kansas City Royals. The only thing Gibbons said to Estrada when he reached the mound?

The Blue Jays manager was in awe of what he just witnessed as Estrada put forth one of the gutsiest and most impressive postseason performances in Blue Jays history. 7.2 innings of work, one earned run, five strikeouts, one walk against one of the best lineups in baseball.

Lose, and the Blue Jays’ 2015 season is over. Win, and the series goes back to Kansas City for Game 6. The right-hander did everything humanly possible to extend that series at least one more game.

After Jose Bautista’s bat flip home run in the 2015 ALDS, after Edwin Encarnacion’s walk-off home run in the 2016 Wild Card game, the next most memorable moment for the Blue Jays’ 2015 and 2016 playoff drives was Estrada absolutely shoving versus the Royals.

In 2015, David Price was the hired gun who became the Blue Jays’ ace in the second half of the season. In 2016, J.A. Happ emerged as the team’s best starting pitcher. When it came to the postseason, nobody pitched better in October than Estrada.

He took the mound six times in the playoffs in 2015 and 2016. He emerged with a 3-3 record in those games, but each of those contests were winnable games. In three of those games, the Blue Jays were also facing elimination.

Estrada pitched at least 5.1 innings in every postseason start he made for the Blue Jays and never surrendered more than three earned runs in a game.

He had five quality starts in six games … in the playoffs.

With the Blue Jays facing elimination, Estrada worked his magic, tossing 6.1 innings of one-run ball on the road in Arlington. With the Jays’ season on the line, he helped the team live one more day.

Or how the drubbing the Blue Jays laid in the Rangers in Game 1 of the 2016 ALDS? Estrada nearly went the distance, coming two outs short of a complete game victory against the Rangers. He settled for a modest 8.1 inning, four hit, six strikeout pitching clinic instead.

As it stands, Estrada was the last Blue Jays pitcher to start a game in the playoffs; Game 5 of the 2016 ALCS, which saw the Blue Jays lose 2-1 to the Cleveland Indians. Again, Estrada kept his team in the ballgame, but the Indians’ pitching staff was too good that year.

To add to Estrada’s accolades, his numbers not only rank high among Blue Jays starting pitchers in the playoffs, but he also cracked a few top 10 lists in all of baseball.

Estrada’s sojourn from middle relief arm to playoff hero in 2015 with the Blue Jays was quite the journey. He was acquired in trade and pitched out of the bullpen to start the season. Due to injuries, Estrada transitioned from the bullpen to the rotation and never looked back.

He finished the 2015 season with a 3.14 ERA and made 28 starts for the Blue Jays that year. Estrada thrived in this new role in the starting rotation, but he pitched exceptionally well during the playoffs.