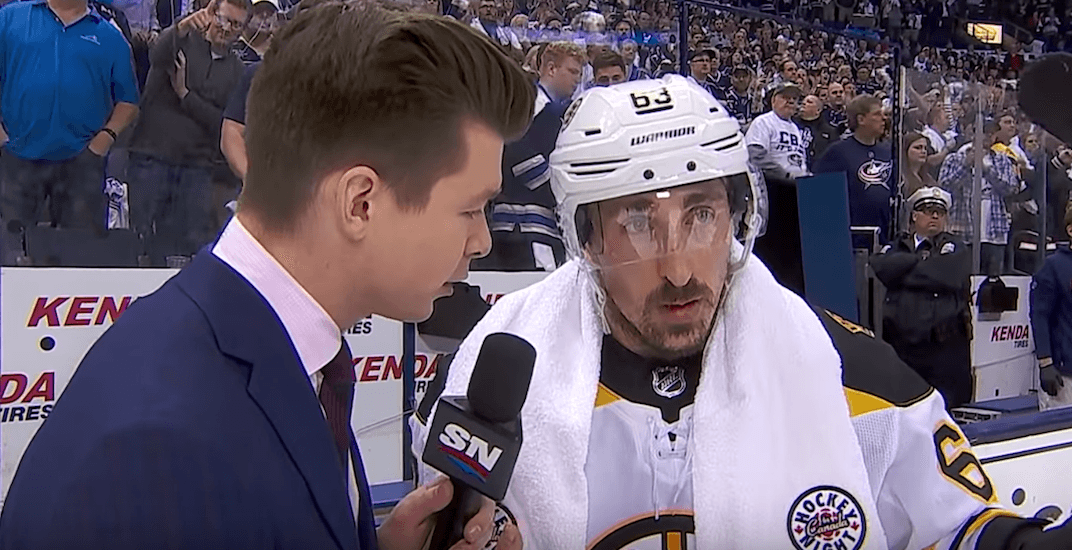 After eliminating the Columbus Blue Jackets in six games to advance to the Eastern Conference Final, you probably expected Boston Bruins forward Brad Marchand to be in a better mood.

Instead, he was just moody.

Marchand proved just how petty he could be during a post-game interview on Hockey Night in Canada with Sportsnet’s Kyle Bukauskas.

When asked to comment on the team’s run to the Conference Final, Marchand said simply: “We did a good job.” On the opportunity that lies ahead of them with an ageing core: “It’s been fun.” And on his line’s strong play?

Well then. Thanks for that, Brad.

Marchand appeared to be upset at a pre-game question from Bukauskas before Game 2, in which he jokingly asked if the Bruins forward had resharpened his skates yet.

Bukauskas was referencing Marchand’s Game 1 antics, in which he stomped on Cam Atkinson’s stick and broke it before an overtime faceoff. “I think he was trying to dull my blade there,” Marchand jokingly told reporters after the game.

But I guess Marchand believes he’s the only one that should be making the jokes, as he didn’t appear pleased at Bukauskas’ question and skated away.

Marchand continued his antics into his post-game media scrum, which didn’t even include the aforementioned Bukauskas, purposefully giving short/uninteresting answers.

If Marchand — as talented as he is — is going to act like a clown on the ice, shouldn’t he expect questions about his circus act?