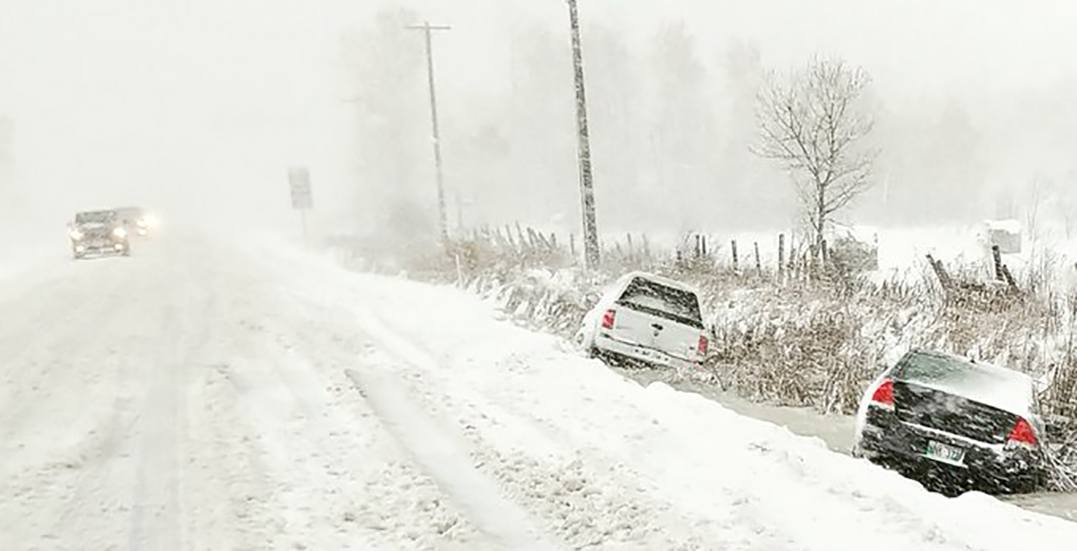 Despite it being early October, many parts of Canada are seeing a flurry of winter conditions — the worst of which are in Manitoba.

Calgary has already seen its fair share of snowfall and Vancouver managed to break several weather records for its cold temperatures this week, one of which was 103-years-old.

Now, much of Manitoba, including Winnipeg, is seeing blizzard-like snowfalls. Environment Canada issued a winter storm warning as parts of southern Manitoba are pummeled with snow.

The weather agency says that parts of Manitoba have already received between 20 to 40 cm of snow, with an additional 20 cm expected over the next 12 hours.

The snowfall is also accompanied by very strong winds, with gusts between 80 to 100 km/h.

“Travelling will remain difficult if not near impossible into Saturday as the heavy accumulating snow, strong winds, and temperatures near zero result in treacherous conditions,” says Environment Canada’s website.

“The combination of heavy, wet snow and strong winds will likely result in more downed trees and power lines.”

Traffic is backed up and barely moving on Bishop Grandin between Waverly and Pembina. Visibility is low on city roads but much worse on the Perimeter Hwy. Get home safely my fellow Winnipeggers ❤️ #mbstorm #MBwx #winnipegweather @weathernetwork pic.twitter.com/dE3Fk7v4zl

Aack! Didn’t get a chance to put away my patio furniture and flowers! Holy snowballs! #winnipegweather #mbstorm pic.twitter.com/AucdIiyAol

These trees outside the office didn’t fare too well today. Most will likely be removed. #mbstorm #winnipegweather #Winnipeg pic.twitter.com/3HKbKoYJCe

That “Snow” is today’s prompt for @inktober is totally appropriate for those of us in Manitoba. #winnipegweather pic.twitter.com/AKLs1ZYwoM

Well I woke up to this! The storm here in #Winnipeg is not letting up should be even more of a blizzard by tonight!! The snow is so heavy with moisture it’s downing trees all over the city, power outages, & driving is horrible! Happy Thanksgiving Weekend Canada! #winnipegweather pic.twitter.com/LIvS1mAjgA

Going to work might not work! #Wpg #winnipegweather #winnipeg pic.twitter.com/AuayeBBm8q

Winnipeg weather can make a difference in 40 days. #mbstorm pic.twitter.com/RvXNHRhLi2

My yard on Monday, my yard on Friday. #mbstorm pic.twitter.com/zwLHQ1wdOt

34 hours since the #MBstorm started. My yard has gone from fall to February-like since yesterday. No end in sight! #thanksgivingtoremember pic.twitter.com/akhYCVW65q

Wow! Already 15cm fell. Could be another 35cm on the way! #mbstorm pic.twitter.com/wPFjmTagcE

#mbstorm Fisher River. Its bad out there. I made it home from work after an early closure due to the weather. Casualties of the storm by my house. Stay safe out there folks. #poweroutage out here too. Hope we get power soon. pic.twitter.com/OgAqFVqOwz

Grateful we made it into Brandon late last night, before the roads closed. This snow and wind isn’t letting up any time soon #mbstorm pic.twitter.com/mQ0GkVJYZa