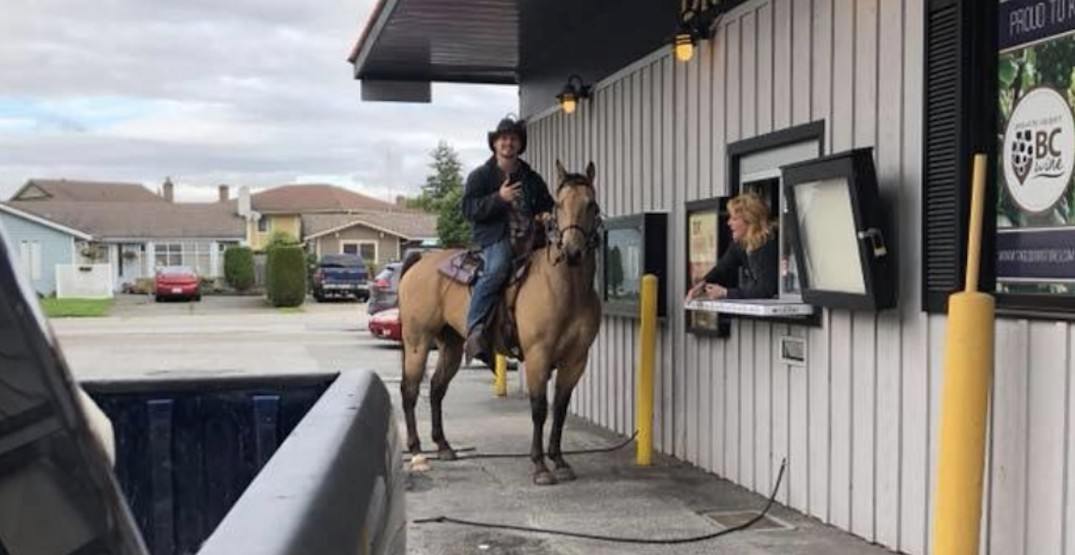 A recent picture of a man on a horse going through a BC drive-thru liquor store is making rounds on the internet.

There is certainly a lot to unpack in this photo.

Let’s start with the drive-thru liquor store. This one is located at the Landing Pub and Grill in Ladner, in case you want to roll through soon.

Now, on to the picture.

“I posted it hoping it would go viral,” she said.

Palmateer captioned the photo cheekily with:

“When people ask, ‘When is Ladner Like?’ Well, this is a horse going through our Drive-Thru Liquor Store/ Beer & Wine Store (yes we have that)lol.”

According to Palmateer, the man riding the horse is Gary B. Biggar Jr.

Biggar told Daily Hive that he’s been riding around town on his horse named Drifter for nearly 15 years, but no one has seemed to take notice until the picture of him at the drive-thru liquor store.

“It’s a huge shock to people,” he said. “I love bringing joy to people. The people of all ages love it.”

Biggar added that he is just a “farmboy stuck in the city.”

Looks like Ladner’s lone ranger is definitely popular. Next time you’re out there, keep an eye out for Biggar and Drifter galloping through another drive-thru.