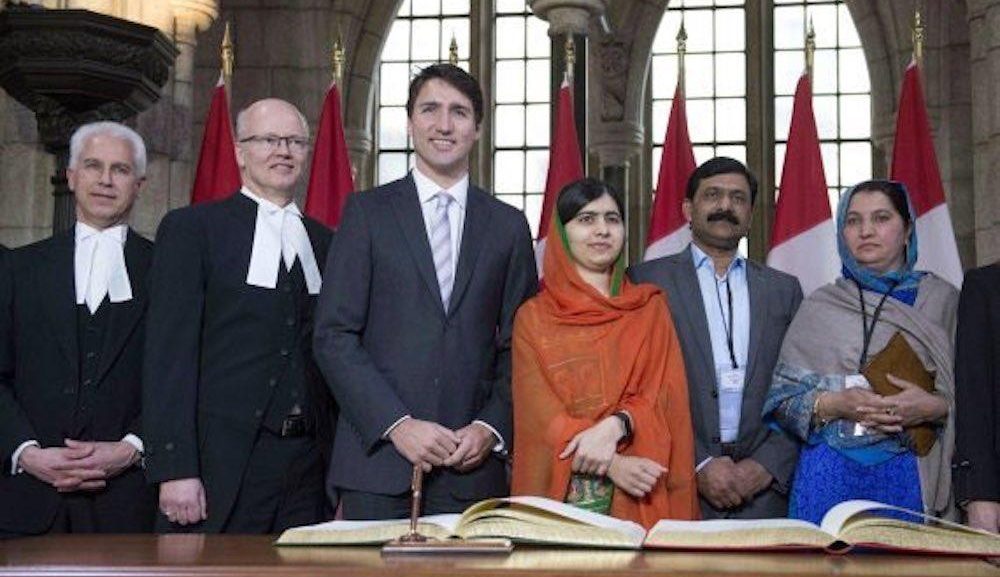 Malala Yousafzai has finally received the honorary Canadian citizenship bestowed upon her in 2014.

The young Nobel Peace Prize recipient and global education activist called it an incredible honour, as she accepted the certificate from Prime Minister Justin Trudeau at the Canadian Parliament on Wednesday.

“Thank you so much to Prime Minister Trudeau and people of Canada for this incredible honour,” said Yousafazi, addressing Parliament. “I’m really excited to be here to meet you all. You are a true example to the world of what it means to stand up for humanity.”

“A bullet is no match for an idea.” #MalalaYousafzai pic.twitter.com/5XT5Nwwwpp

Yousafazi spoke with joy, as she expressed everyone’s interest in the Pakistan native’s meeting with the Canadian Prime Minister. Leading up to her trip, many people Yousafazi met said she has to shake Trudeau’s hand.

“I’ve done it,” she said, and called him “an amazing person and an inspiration.”

“It’s a privilege to welcome you to our house,” said Trudeau, describing Yousafazi as the “true embodiment of leadership and service.”

“Only through education can we achieve true peace. I say that as a teacher,” said the Prime Minister, who talked about formally teaching in BC for five years.

Trudeau said that education is about challenging the world view and about innovation.

“At a time when the world is hopeless PM @JustinTrudeau speaking for women & refugees” words from Malala Yousafzai accepting 🇨🇦 citizenship pic.twitter.com/Q2AevYK4ca

“Education has the power to change the world. In order to achieve progress, we all have to make sure all children, girls as well as boys, get to go to school,” he said. “Malala, you chose hope, you chose dignity, you chose determination, and children around the world thank you for it. Today in this country, we honour you.”

Yousafzai’s story began when she was just 15 years old and had found herself the target of Taliban assassins after becoming an outspoken advocate for the rights of girls to learn and to attend school. Ever since, she has become an international spokesperson for girls’ education and the rights of women and girls.

She established the Malala Fund, which helps girls learn and lead without fear.

“I am hopeful that you will inspire many more countries and many more leaders to follow your footsteps,” Yousafzai said to Trudeau, after accepting her citizenship.

“He does yoga and has tattoos… But you do not have to be as old as the young PM Trudeau to be a leader.“ — Malala pic.twitter.com/arCjL81NSR

Prior to arriving to Parliament, Yousafazi and Sophie Grégoire Trudeau visited Ridgemont High School in Ottawa as part of Yousafazi’s Canadian trip.

Thank you #Malala Yousafzai and Sophie Grégoire Trudeau for your surprise visit @RidgemontHS and speaking to our @OCDSB_Students @MalalaFund pic.twitter.com/0SeNTLz8ix