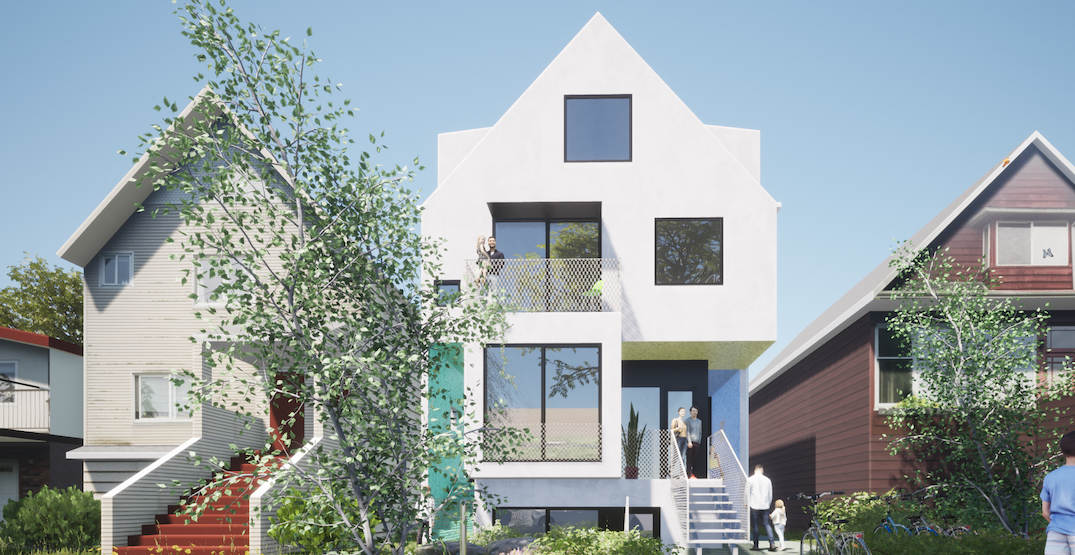 But it was approved on Wednesday evening only after councillors made significant amendments, adding further considerations and directions, with council later voting on each policy point separately.

Stewart told Vancouver City Council Making Home is limited to 2,000 lots so that the policy does not effectively upzone the entire city. As well, the six units would be permitted by only a modest increase in structural height, including units in the basement.

The policy provides homeowners with two pathways to choose their housing tenure, which act to help enable housing affordability for middle-class households with an annual income of under $80,000 and provide the municipal government with a new revenue source — such as through community amenity contributions (CACs) — to fund public benefits such as affordable housing, childcare, infrastructure, and the Climate Emergency Action Plan.

One option enables the property owner to build all six units — possibly keeping one for themselves if they intend to stay on the property by downsizing — and sell all of the other units as strata. The City would capture the lift in land value from this extra density as a measure to limit speculation and fund public benefits.

The alternative option is to redirect the land value lift towards maintaining the affordability of at least two units on a permanent basis for the lifespan of the structure. This guarantee would be made through a covenant on title in the Land Title Act and possibly by placing a second mortgage on title facilitated by BC Housing through their Housing HUB program of catalyzing housing for middle-class families.

“For too many folks, living in Vancouver is becoming a fading dream. Many young people are moving away, many people are seeing their families disrupted because they can’t live in the neighbourhoods they once lived in, and many companies say they can’t retain employees or attract new ones,” said Stewart in his closing comments prior to the vote.

“The land value capture is very important because we can’t continue to grow as a city without the infrastructure we need. By infrastructure, I broadly mean the pipes and sewers, things we need for each home, but also things we need for our social fabric, such as housing for those without homes, workers increasingly being driven from the city, and frontline workers.”

With council’s approval, City staff have been directed to analyze the program, estimate how much revenue could be raised for the city, and report back to city council with recommended policy details for implementation. This is expected before the October 2022 civic election.

City staff will also consider the numerous additions to Stewart’s motion made during the debate.

This includes Green Party councillor Adriane Carr’s additions of considering ways to have basement units be situated on a higher grade to allow sufficient natural light and air to improve livability and accessibility, and considering measures to incentivize the retention and renovation of character homes.

COPE councillor Jean Swanson’s approved additions entailed considering more units deemed affordable, including the additional category of single-person households making up to $50,000 annually. She also saw the approval of her amendments relating to providing evicted tenants with the first right of refusal for new similar units, and investigating whether East Vancouver neighbourhoods would see greater uptake compared to the Westside.

This is city council’s second rendezvous on Stewart’s Making Home proposal, with the approved motion being a revision of what was rejected by city council in a 7-2 vote in September 2020.

Independent councillor Rebecca Bligh, who voted against the 2020 motion, said her support for the revised motion is grounded by how it builds on a previous motion by independent councillor Lisa Dominato that tasked City staff to explore new housing opportunities to address the “missing middle” gap.

“It will be strange for me to vote against as I supported that motion, and that motion is the first motion of this kind that we considered during our term,” said Bligh.

“I just think that it goes without saying that we need to be looking at different types of housing. This council has already supported motions that are indicating to staff that we do that. Have I enjoyed seeing the campaign and radio ads as a way to pressure council into the decision? Not really. At the end of the day, what is important is delivering housing… I think that there’s so much attention on this motion that we all have our magnifying glass in going through that report back to make sure we’re not going to have the unintended consequences of upzoning the city, increasing land value beyond any chance of delivering affordable housing, and the additional concerns that have been raised.”

In an interview with Daily Hive Urbanized on Wednesday, BC minister of housing David Eby said Vancouver’s policy moves in the right direction, specifically stating that additional density is needed in single-family neighbourhoods.

But the policy — if it is ultimately implemented after City of Vancouver staff return with recommended policy details — could be tied up in bureaucratic red tape, given the City of Vancouver’s notorious delays with processing, reviewing, and approving development permits.

“That’s going to be the big challenge with this plan,” said Eby.

“You now have the right to build this number of units on your property, but you can’t actually get the permit to build them, is the situation a number of people, not just in Vancouver but other municipalities, run into.”

As a case in point, as of the end of 2021, City of Vancouver staff reported they had accumulated a backlog of 500 single-family home building applications.