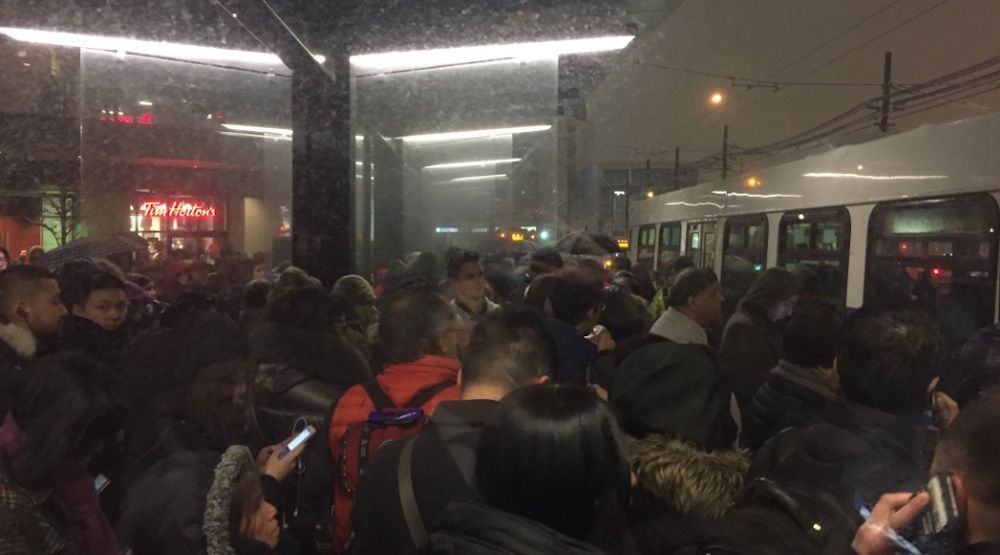 UPDATE at 7:30 am Thursday: Significant service disruptions continue through the morning rush hour. No train service to Vancouver International Airport, but a bus bridge shuttle is in place from Bridgeport to YVR Airport stations. Trains are only operating on a single-track across the North Arm Bridge over the Fraser River from Marine Drive to Bridgeport stations.

For the fourth time in less than a week, SkyTrain’s Canada Line is experiencing service disruptions due to snowfall and freezing rain.

There is no train service to Vancouver International Airport; trains are only operating from Waterfront Station to Richmond-Brighouse Station.

A bus bridge shuttle is operating between the affected stations from Bridgeport Station to YVR Airport Station.

Issues with the train system began at approximately 9:40 pm.

The Expo and Millennium lines are operating normally, but some buses across the region are experiencing delays and reroutings. Earlier in the day, there were service disruptions on the Expo Line – at Commercial-Broadway Station during the morning rush hour and Gateway Station late-afternoon – due to medical emergencies.

The impact from current service interruptions is likely relatively minimal given that it began late at night instead of during rush hour, but it impacts those who may be catching a flight from the airport this evening.

Previous disruptions over the past week were the result of issues on the North Arm Bridge between Marine Drive Station and Bridgeport Station.

Compared to the system used by the Expo and Millennium lines, the Canada Line’s technology and design is more susceptible to problems from snowfall events, as explained here.