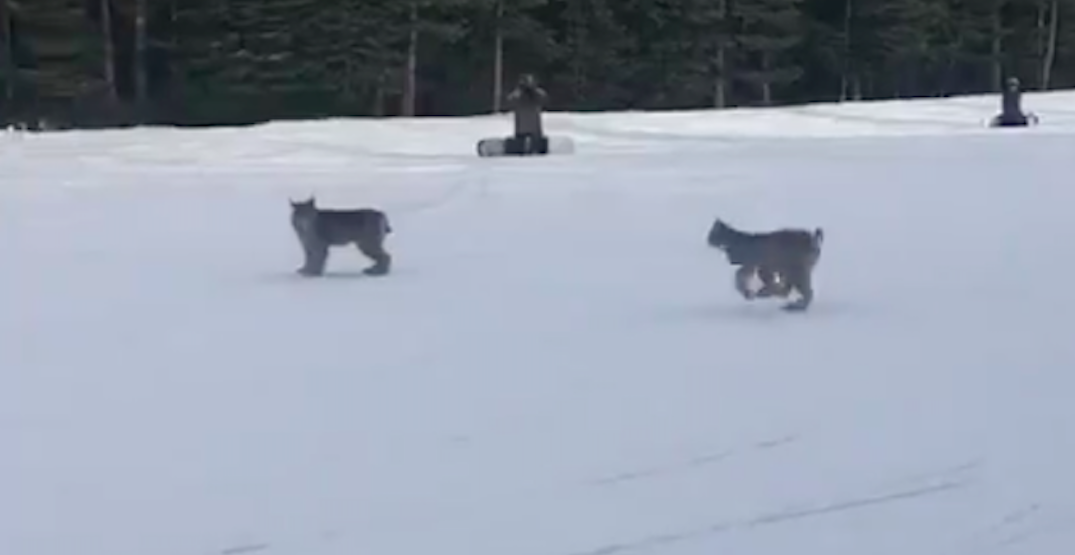 Skiers and snowboarders at Nakiska Ski Area in the Canadian Rockies got more than they bargained for this past weekend, thanks to a visiting pair of lynx on one of the resort’s runs.

The encounter was captured on video by Kelly Doody, who shared the scene on social media.

“Trading moguls for wildcats,” she wrote. “Green is the new black.”

Lynx on the hill at @SkiNakiska! Trading moguls for wildcats, green is the new black. pic.twitter.com/HUfLd00TBE

According to Encyclopedia Britannica, lynx are “nocturnal and silent, except during the mating season,” which just happens to be right now (February and March).

During this time a male will follow the female, and two months after mating, the female gives birth to between one and six kittens.

The Canada lynx depends heavily on the snowshoe hare (Lepus americanus) for food and its population increases and decreases regularly every nine or 10 years, relative to the population of its prey.

And while it’s certainly a rare sight, it’s not the first time a lynx has been spotted on a ski run at a popular resort.

In March of 2017, a lynx sauntered across a run at Big White Ski Resort, near Kelowna.

So if you’re out playing in the mountains over the next month or so, keep your eyes peeled. You never know what you’ll see.