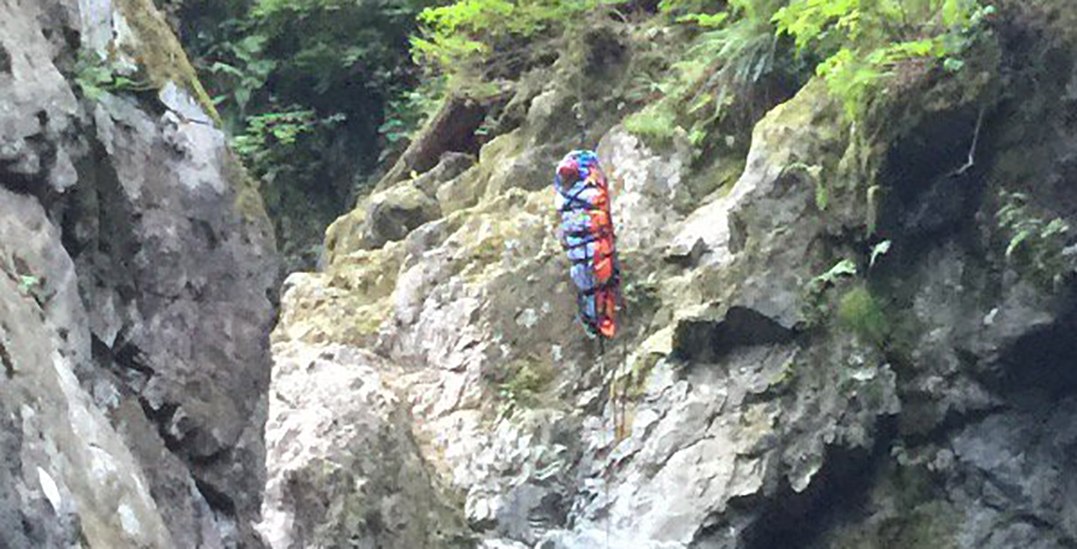 Firefighters and paramedics were called to Lynn Canyon yesterday afternoon, after receiving a report of a woman who injured herself cliff jumping off a 90-foot drop.

The call came at around 4:15 pm, a direct report from a park ranger who had witnessed a “cliff jumper who had slipped mid-jump.”

District of North Vancouver Fire Crews are currently responding to a water rescue at 90′ pool in Lynn Canyon. Please avoid the area and allow emergency crews responding to the park room to operate.

The ranger witnessed an adult woman land against the rocks on her back, being tossed into the water in the process.

She was having extensive trouble swimming but fortunately, her friends were able to enter the water and move her safely to shore.

Fire crews from the District of North Vancouver arrived at the scene quickly and met her at the shoreline, approximately 200 metres south of the Lynn Canyon Suspension Bridge.

There were no life-threatening injuries, although she complained about back and hip pain. Crews entered the water using an inflatable rescue boat and put her in a Conterra Splint – what Chief Duncan of the North Van Fire Rescue describes as “essentially a full body cast.”

She was moved via rescue boat to directly underneath the suspension bridge, where she was lifted up by a harness.

From there, she was taken to hospital by BC Ambulance Services.

District Fire Crews used a specially designed vacuum immobilization device and a twin tensioned rope system to successfully extricate an injured swimmer from 90′ pool in Lynn Canyon. The Suspension bridge is now re-opened. Thank-you for your cooperation during this incident. pic.twitter.com/2joVrScFVR

The 20-year-old woman was a visitor from outside of the North Shore, her and three of her friends from Surrey and Greater Vancouver were visiting the area.

“There are lots of signs warning of the risk of jumping and the number of deaths that have occurred over the years. A lot of people don’t see the rocks or debris in the water either.”

“She’s lucky that her friends were there with her,” he explains. “She’s also lucky that there happened to be a park ranger who was there and witnessed the situation.”

Duncan also mentions that the North Van Fire Department has made multiple rescues this season, across parks and local trails.

Just over two weeks ago, another 18-year-old was injured, cliff jumping from the same location in the same fashion.