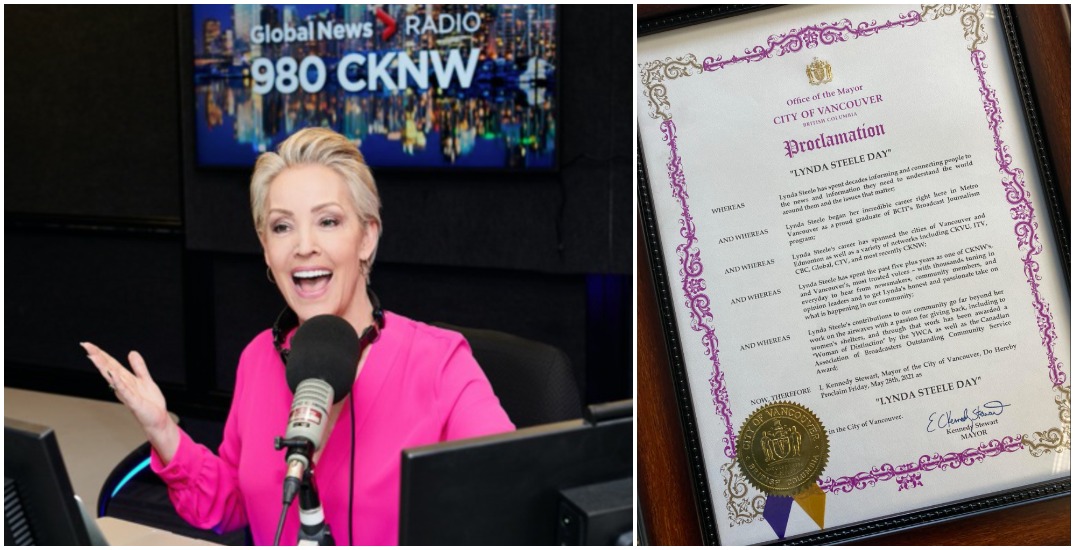 What a way to ring in your last day at work.

Declaring Friday, May 28, 2021 “Lynda Steele Day,” Kennedy Stewart says the proclamation recognizes the award-winning journalist’s “ongoing commitment to better informing and connecting people to the ideas and news that matters is a huge contribution to our community.”

Stewart read the surprise proclamation on-air during an interview with Steele’s show Wednesday, calling her one of the city’s most trusted voices, and listing off her decades of community contributions.

An on-air surprise for @steeletalk, as Mayor Kennedy Stewart proclaims this Friday as Lynda Steele Day in the @CityofVancouver!

Tune in from 3pm all this week for the final episodes of the Lynda Steele Show on CKNW. 🎙️ #vanpoli pic.twitter.com/SAdlkQGtN0

She was surprised by the framed proclamation, telling Daily Hive it was “the biggest, most delightful surprise of my radio career.”

“It made me cry. On air. With the mayor chuckling that he’d pulled this one off without me knowing,” she said.

The only other broadcaster to be honoured with a city proclamation is Red Robinson, when Vancouver named March 30, 2017 “Red Robinson Day.” Other notable recipients include Wally Buono, longtime head coach of the BC Lions, and Christine Sinclair, when she became the all-time leading scorer in international soccer history last year.

Steele, who has been hosting The Lynda Steele Show, the station’s flagship afternoon drive talk show for the past five years, announced earlier this month that she would be leaving the airwaves to spend time with her ailing father.

The broadcaster says it has been humbling receiving emails and good wishes from listeners across the province and beyond since she announced her departure.

“It’s truly a testament to the power of radio – where in such a hyper connected, frenetic world, listeners are intimately tapped into the conversations,” she says.

“I may not see them – but they are letting me know they are there. I am so grateful for their support.”

Before taking the helm as host at CKNW in 2015, Steele was an anchor at CTV News Vancouver, where she was the face of the popular “On Your Side” consumer franchise. It was in that role where she was recognized with an RTNDA award for an investigation into defective appliances at new condo developments in Vancouver. The success of the nightly flagship program on the 6 pm news spawned a national weekend show on the Business News Network of the same name.

Previous to that, Steele was the anchor of the 6 pm Global Edmonton news for 17 years.

Steele’s CKNW show host successor has not been named by Corus. The Lynda Steele Show runs from 3 to 6 pm on weekdays.

Read the full city declaration below:

WHEREAS Lynda Steele has spent decades informing and connecting people to the news and information they need to understand the world around them and the issues that matter;

AND WHEREAS Lynda Steele began her incredible career right here in Metro Vancouver as a proud graduate of BCIT’s Broadcast Journalism program;

AND WHEREAS Lynda Steele’s career has spanned the cities of Vancouver and Edmonton as well as a variety of networks including CKVU, ITV, CBC, Global, CTV, and most recently CKNW;

AND WHEREAS Lynda Steele has spent the past five plus years as one of CKNW’s, and Vancouver’s, most trusted voices – with thousands tuning in everyday to hear from newsmakers, community members, and opinion leaders and to get Lynda’s honest and passionate take on what is happening in our community;

AND WHEREAS Lynda Steele’s contributions to our community go far beyond her work on the airwaves with a passion for giving back, including to women’s shelters, and through that work has been awarded a “Woman of Distinction” by the YWCA as well as the Canadian Association of Broadcasters Outstanding Community Service Award;Now, Therefore, I, Kennedy Stewart, Mayor of the City of Vancouver, Do Hereby Proclaim Friday, May 28th, 2021 as “Lynda Steele Day” in the City of Vancouver.