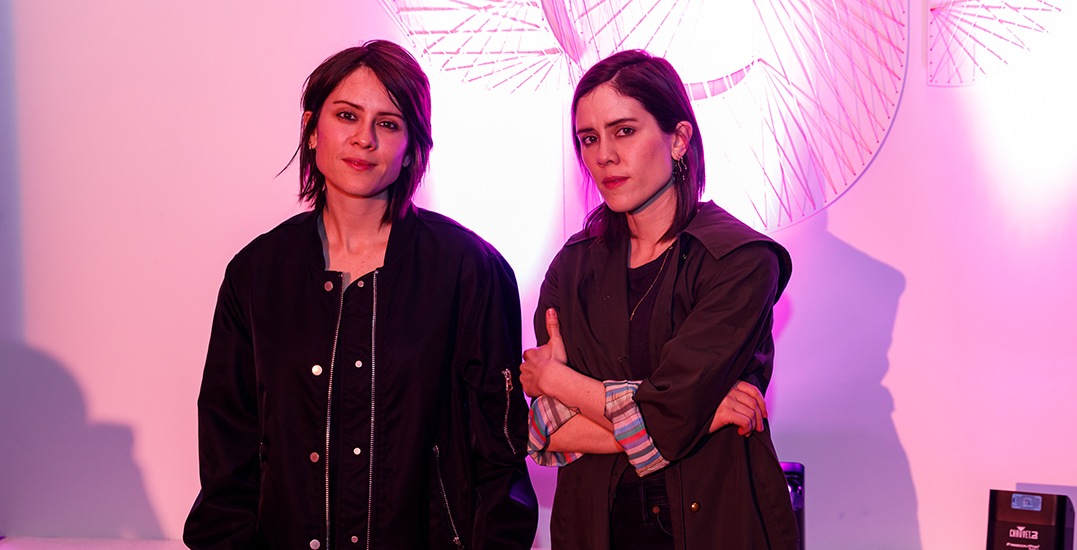 Despite Lyft being less than a week old in Vancouver, they’ve been doing plenty to celebrate their long-awaited arrival.

The company recently announced a partnership with Canadian-born songwriters and artists Tegan and Sara which includes a $15,000 donation to the artists’ charity foundation.

Daily Hive recently had the opportunity to interview Sara Quin and learn more about the group’s recent work, their charity foundation, and what it’s like to live in Vancouver and tour without a driver’s licence.

Tegan Quin and Sara Quin, who were both born and raised in Calgary, Alberta, are hot off the heels of their ninth album, Hey I’m Just Like You, which released in September 2019. The duo also recently released their first book, a memoir titled High School.

“We wanted to write a book, so we started working on a memoir about our years in high school,” Sara Quin tells Daily Hive in an interview. “As we worked on the memoir, we unearthed music that we had written in high school that the vast majority of our fans hadn’t heard.

“We decided to take those early recordings and turn them into our ninth album,” she continues. “The songs are recorded as our adult versions but written when we were teenagers in high school.”

Sara Quin her twin sister spent the past six months on a reading tour, performing their new songs and “threading together the narratives.”

“I think it’s a story of young people, of queer people, and how we bloom and find ourselves,” she adds. “One of the things we’ve really grappled with as we’ve aged in this industry is that the [entertainment] industry loves youth. It’s fuelled by sexuality, sex appeal, and the idea of fame and celebrities.

“I think that for women, in particular, we’re not taken as seriously as young songwriters, or perhaps as seriously as men are. Maybe we were even guilty of not taking our younger selves seriously.”

2019 was also the first time in over a decade that both Tegan and Sara Quin lived in the same city.

“We’ve been, not quite bi-coastal but essentially living 3,000 km apart,” she says. “We’ve done bits in the United States together for work and songwriting processes but as of last January, we’ve been exclusively in Vancouver. It’s been a busy decade for us; it’s a great privilege to be able to settle down and be creative.”

Sara Quin also notes that neither she nor her sister has a driver’s licence, which made transportation around Vancouver substantially more difficult prior to the arrival of rideshare.

“We’ve spent much of the last decade pretty much relying on rideshare programs,” she says. “I wouldn’t have been able to base myself out of Los Angeles if I hadn’t had access to these programs.”

Quin adds that rideshare doubles as a business tool for her band as well.

“I don’t have a licence, Tegan doesn’t have one,” Sara Quin continues. “It’s not just when we’re at home; it’s a business tool. We have a band and a crew of 16 when we tour — that’s a lot of movement. There are people needing to get around from hotel to venue, the airport to home… we’ve all struggled when we were faced to rely on the goodwill of others or wait to try and get a taxi.”

“It felt like a revolutionary thing that I could call a Lyft and that I’d be able to send my ETA to my girlfriends or to my tour manager,” she says. “It really changes our level of comfort.”

The $15,000 donation from Lyft will go towards Tegan and Sara Quin’s foundation, which raises funds for LGBTQ girls and women. Sara explains that their charity works with a number of different communities and organizations.

“We want to support communities on the ground, social justice organizations, community groups, cultural centres, and programming that we think is inspiring and helpful in the community,” she says. “We do that with small grants and funding from collaborative partners.”

“One of our most accessible grants has been a scholarship fund that’s used for an LGBTQ summer camp. Some of these people wouldn’t have the financial support to apply for these camps. They can meet people in their community and meet with mentors… these are ecosystems that allow the community to be strengthened locally and online.”

Parts of the interview have been edited for brevity and clarity.