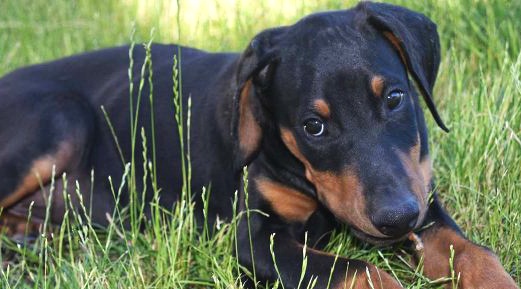 Lola the puppy (BC SPCA)

The BC SPCA is investigating after a Doberman pinscher puppy was found bleeding and abandoned in Langley after an apparent “barbaric” tail docking.

The puppy, named Lola by the BC SPCA, was found by two Good Samaritans visiting from Alberta on Sunday, at 264th Street and 64th Avenue.

In a release, Marcie Moriarty, chief prevention and enforcement officer for the BC SPCA, said Lola was in a great deal of pain.

“The puppy was thin and her tail area was grossly swollen and infected–oozing pus and blood,” said Moriarty.

“Her tail had been wrapped tightly with a plastic zip tie, in an apparent effort to do a home amputation for cosmetic purposes.”

Three-month-old Lola is now receiving veterinary treatment and is in the care of an SPCA foster home, while her case is investigated.

Tail docking of dogs has been illegal in British Columbia since November 2016, when the College of Veterinarians of BC voted overwhelmingly to ban it.

According to the college, no scientific evidence supports a welfare or medical benefit for tail docking or alteration in dogs, horses, or cows.

However, there is evidence that it can lead to problems with an animal’s behaviour and communication, as well as increase the risk of infection and phantom pain.

The Prevention of Cruelty to Animals Act allows the BC SPCA to investigate and recommend charges against anyone thought to be carrying out such procedures.

“This was a barbaric act that caused needless suffering to an innocent puppy and it clearly contravenes the Prevention of Cruelty to Animals Act,” said Moriarty.

Moriarty said she’s worried there may be more puppies in the litter who are being subjected to the same cruelty.

Anyone with any information about Lola’s owners is urged to call the BC SPCA animal cruelty hotline at 1-855- 622-7722.