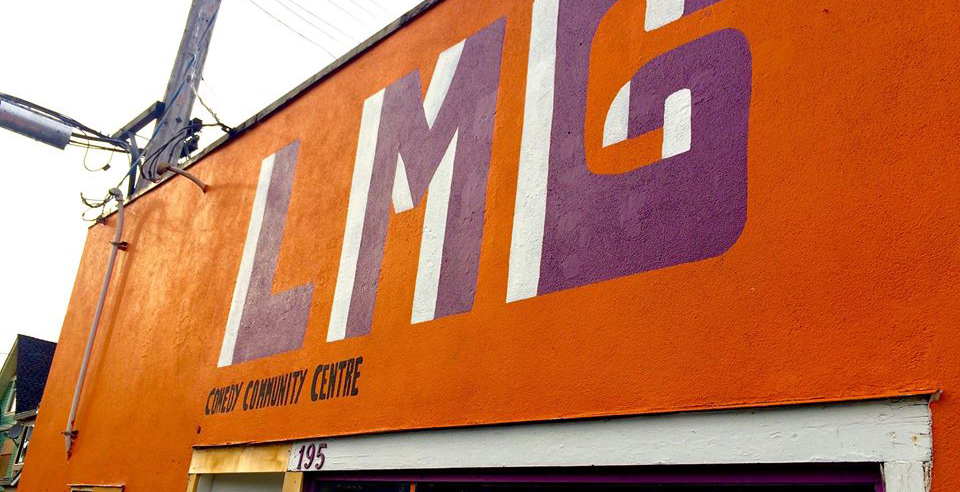 A theatre space that nurtures up-and-coming comedy artists in Vancouver says its future is in jeopardy because its building may be demolished.

A development application has been posted for Little Mountain Gallery, an orange arts space on the corner of Main Street and E 26th Avenue. According to the City of Vancouver, an architectural firm has asked to build a four-storey mixed residential and commercial building there instead.

“These are the cool things in our city, and we’re losing them,” LMG’s manager Brent Constantine told Daily Hive in an interview.

“We’re not pointing the finger at the city or blaming our landlord. We just want people, if they love art space, to contact people who have control.”

In a letter to the city, LMG’s board of directors said they aren’t against the building’s owner  exercising his right to develop the property as he wishes. Constantine added they’re grateful for the decade he let them stay in the building at below-market rent.

But the reality is Vancouver could lose one of the few affordable arts spaces it has left.

“Little Mountain Gallery has been recognized as a unique space in Vancouver and we feel its loss would be a significant blow to the city’s comedy and arts community,” LMG’s board continued.

LMG’s East Vancouver building was built in 1930, according to the board of directors. It’s a structure that has previously housed an automotive garage, a metal shop, a plumbing and heating business, a bottle depot, and a seafood market.

It became a space for the arts in 2001 — known then as the Butchershop Collective. Now it hosts independent stand-up, sketch, and improv comedy shows. Musical performances, classes, and workshops also take place at the gallery.

LMG has asked people who support what it does to write to city officials by January 24 to explain how important the space is. Several community members have chimed in.

If you think Vancouver punches about its weight for comedy, it’s thanks in large part to affordable spaces like Little Mountain Gallery that make it possible for amateurs to practice & put on shows. LMG is up for development, so tell the City how you feel! https://t.co/EFEv0YhlKc

The @CityofVancouver is considering letting a developer mow down everyone’s favourite comedy venue, Little Mountain Gallery. You can help save it by emailing [email protected] about why you love it. (Do it rn the deadline is tonight) pic.twitter.com/1oRaxBxpvi

I September 2019, Vancouver City Council approved a 10-year plan that included a section called Making Space for Arts and Culture. The document acknowledged that rapid development in the city is making it challenging for artists to afford to live and share their work in the city.

Going forward the city’s target is to have no net loss of arts and culture spaces.

If the building is demolished, Constantine said LMG would have to look for alternative spaces. They hope that by speaking out they might be connected with one.

“It’s up to us to find a space, and re-create this really magical cool thing,” he said

The City of Vancouver told Daily Hive LMG was awarded $11,000 from the city in May 2019 to support its space planning.

Well-known comedians Ivan Decker, Graham Clark, and Brent Butt have all performed on LMG’s stage before. Keeping spaces like it alive are important for fostering the next generation of artists, Constantine said.

“Where are they getting that chance to perform or produce their own shows, and make money off the sweat of their brows?”

A decision from Vancouver’s director of planning on whether LMG’s building will be redeveloped is expected sometime in February 2020.