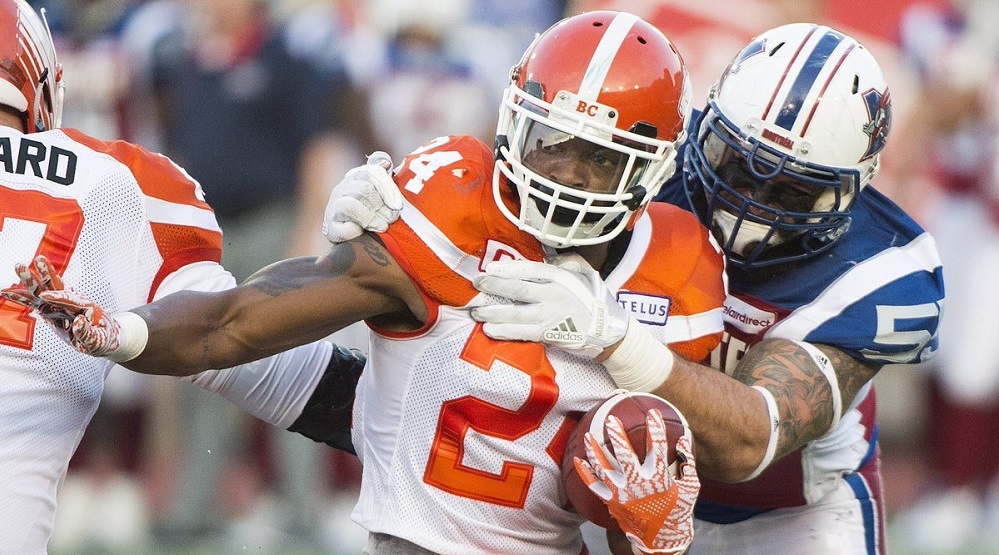 Travis Lulay is the definition of a team player.

Once the starting quarterback for the BC Lions, the 33-year-old is now firmly the backup to Jonathan Jennings. But Lulay’s role extends far beyond that. More on that in a bit.

For the second straight game the Lions found themselves in a defensive battle. Neither team had hit double digits heading into the final quarter.

A strong fourth quarter helped the Lions break past the Montreal Alouettes 23-16, with BC saving their best for last.

Lulay might be the MVP tonight for the Lions despite the fact he was on the bench for most of the night.

That’s because in the third quarter and the game tied at 6-6, Jennings threw an interception that would’ve given the Als the ball around midfield.

Well after the play however, Wally Buono threw out a challenge flag. Video later showed that Lulay was watching the play on a tablet on the sidelines, and told Buono to challenge for pass interference.

The play was overturned, and the Lions ultimately scored a field goal on the drive.

That proved to be key, and it was nice that Lulay got rewarded for his efforts later on with a touchdown.

A record night for Soloman

It seems like Solomon Elimimian is doing just fine without his buddy Adam Bighill.

The two were a dynamic duo for years on the Lions defence, but with Bighill off to an NFL tryout, Elimimian is racking up the records.

And what can you say about this guy? 💪🏾

The defence has been by far the most consistent part of the Lions team this season, and Elimimian is a big reason why.

A couple of misplays cost the Alouettes a chance to comeback in this game. With the Lions up 23-16 in the final few minutes, a pass picked off by Anthony Gaitor stopped an Alouettes rush midfield.

The Lions punted, but Montreal got caught with too many players on the field, which gave BC the ball with 47 seconds left, which basically ended the game.

The Lions have now won two in a row after losing their season opener. The third and final game of the road trip is next Saturday, when the Lions take on the Hamilton Tiger-Cats.

The wait is over….

🎥 ALL ACCESS: Step into the Road Warriors’ dressing room for Game Balls in Montreal!#WeAreTheLions pic.twitter.com/BMqa6AyGw9