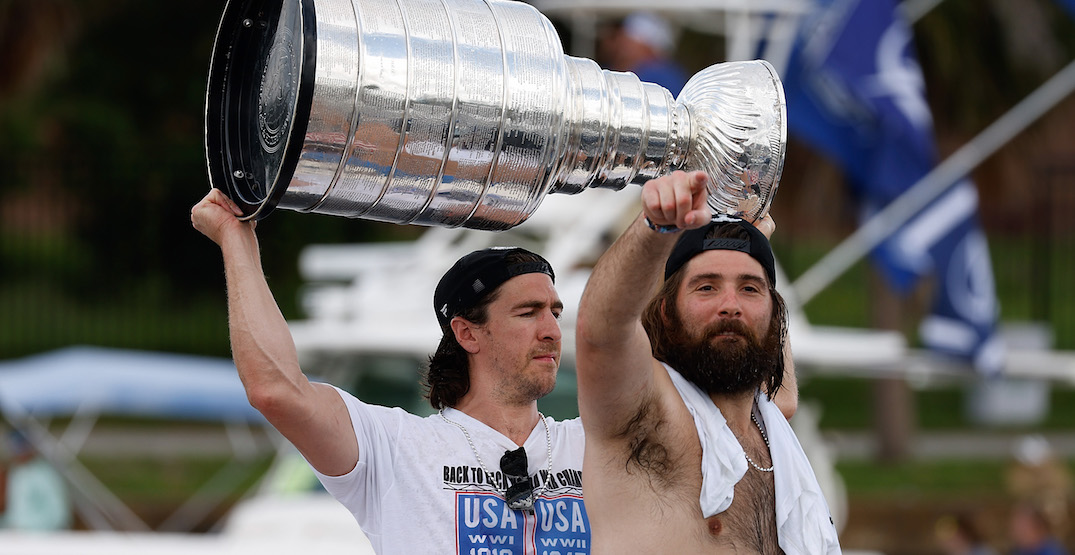 Alright, who did it?

That’s a question many people were asking after the Stanley Cup was photographed with big dent in it after the parade in Tampa on Monday.

Patrick Maroon has since fessed up to being the one that damaged it, though he says it was an accident, and it didn’t come from being careless.

“I want people to know the real story,” Maroon told 101 ESPN St. Louis radio. “It was obviously raining, and it was wet. I went to lift it, and I went backwards with it. I slipped and [Keeper of the Cup Phil Pritchard] helped me up, and the Cup went back on its end.”

The ⁦@StanleyCup⁩ did sustain some damage during today’s festivities. It’ll be sent to Montreal for repairs and be back to resume Cup celebration with ⁦@TBLightning⁩ next weekend pic.twitter.com/MEbZGZFxSD

And no, they didn’t pull a Tom Brady and toss the Cup around.

“People are saying we disrespected the Cup — such BS because if they had a half a brain, you know it’s wet outside, and you’d think we’d be throwing the Cup around? No. We didn’t disrespect it. It was a complete accident, and we both got hurt. My back has been hurt all day today. But yeah, that’s what happened. Nothing crazy.”

Ironically, the damaged trophy needed to be shipped to Montreal to get fixed. The Stanley Cup’s official Twitter account posted an update on Thursday, with the trophy looking good as new.

Ready for my celebration tour. pic.twitter.com/OlQX7VUXME

“I’m sure there are way worse things that have happened to the Cup besides me just falling,” Maroon added. “They said it’s an easy fix. The reporters were saying it’s going to be on the IR for weeks. It’s back in Tampa on Thursday, so a quick fix. It wasn’t even that bad. The picture [made it look like] it was dented that bad — it wasn’t.”

Indeed, much worse things have happened to the Stanley Cup since it was first commissioned in 1892.

The Montreal Canadiens left it on the side of the road in 1924, and it was thrown into a bonfire by the Toronto Maple Leafs in 1962. Mark Messier once damaged it while partying in a nightclub in 1987, and Guy Carbonneau dented it when he tried to throw it off a deck into a pool.

And those are just some of the stories we know about.