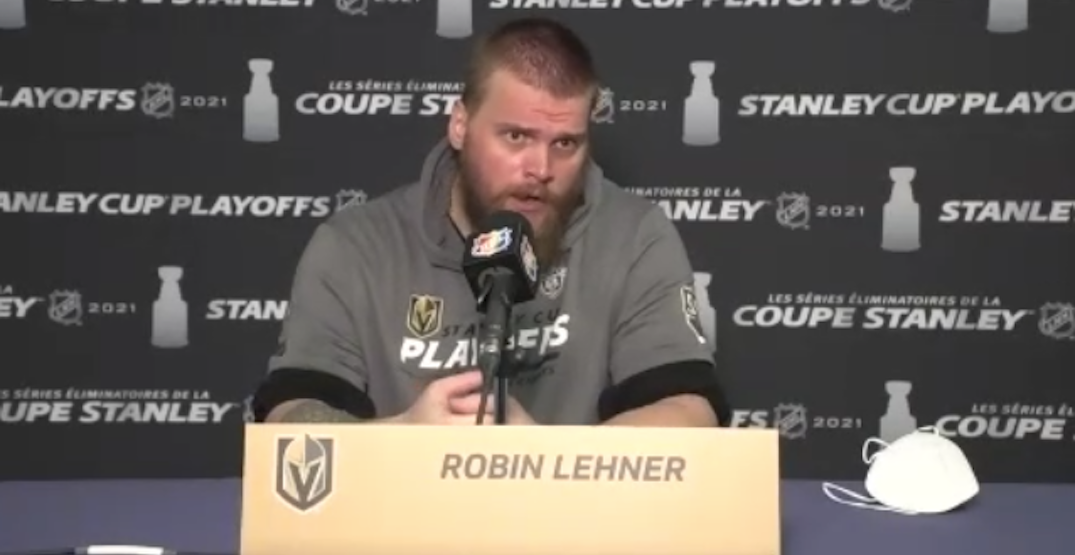 Robin Lehner didn’t just play Game 4 under pressure; the Vegas Golden Knights goaltender played it with a huge chip on his shoulder.

Vegas head coach Peter DeBoer made the controversial decision to bench Marc-Andre Fleury in favour of Lehner on Sunday in Montreal. The Canadiens outplayed Vegas, but Lehner was outstanding, stopping 27 of 28 shots to lead his team to a 2-1 win in overtime.

After the game, Lehner said all the things that you’d expect from an NHL player. The 29-year-old Swede expressed that he doesn’t care if he’s playing or on the bench because “it’s a team game” and that Fleury is “the reason why we’re here.”

But then he called out his haters.

“I sat for two hours and watched you guys talk shit on Twitter on me to get me motivated,” Lehner said during his post-game media availability. “It was great to see all what you guys had to say.”

The move to start Lehner was widely criticized. While Fleury’s gaffe cost Vegas dearly in Game 3, the Quebec native has otherwise been outstanding in the playoffs, with a .921 save percentage. Lehner, meanwhile, had not played since Game 1 of the previous round, when the Colorado Avalanche lit him up for seven goals against.

“I don’t care what people think,” Lehner added. “It’s a great motivation for me. I don’t do the flashiest saves and all those things, but before this season, ever since I got out of rehab [and] even before that in Buffalo, I’ve been putting up some pretty good numbers and people act like I’m not very good, especially in our hometown.”

While Fleury is a Vezina Trophy nominee this season, so was Lehner when he was with the New York Islanders in 2018-19. Lehner also finished sixth in Vezina voting last season.

Lehner has been put in a difficult position, sharing the net with the immensely popular Fleury since being acquired by the Knights late last season. It was Lehner, not Fleury, who was leaned on most heavily during the postseason last year.

That move was controversial at the time too, with Fleury’s agent, Allan Walsh, infamously tweeting out an image of his client getting stabbed in the back with a sword from DeBoer.

“I have the love from my teammates, my coaches,” Lehner added. “Me and Flower have gotten really close this year, supporting each other, and we don’t care about the noise.

“It’s just great motivation for me. It was very enjoyable on Twitter today. Thank you guys very much for giving me that motivation.”