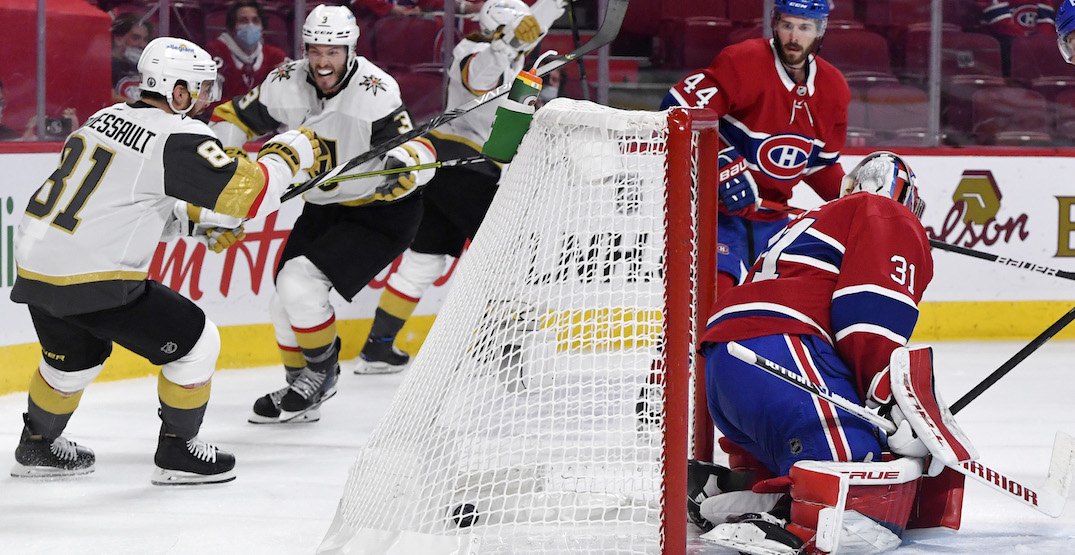 Nicolas Roy got the game-winning goal just 1:18 into overtime for the Vegas Golden Knights, who evened the series against the Montreal Canadiens in Game 4.

Carey Price made the first save, but he couldn’t stretch far enough to stop Roy on the rebound.

Truth be told, Vegas didn’t deserve to win this one. They were outplayed throughout, failing to generate many chances against Price, as they were outshot 28-19. It was a reversal of roles from Friday’s game, when the Habs were outshot 45-27 and were a bit lucky to win Game 3.

The Canadiens outshot Vegas 11-4 in the first period on Sunday, but didn’t take the lead until late in the second period. Not long after a pair of good chances by Vegas, Paul Byron scored on a breakaway with a perfect shot, beating Robin Lehner up high.

Replacing Marc-Andre Fleury, who was benched in a controversial decision, Lehner was outstanding for the Knights, stopping 27 of 28 shots — including a pair of huge saves off the stick of Eric Staal in the first period.

I think Robin Lehner is alright

Despite Vegas not getting many scoring chances in the third period, Brayden McNabb tied the game up for the Golden Knights. The defenceman snuck in from the point and beat Price on a shot that handcuffed him.

Love this for us 🚨 pic.twitter.com/mskk4fmUXR

The refereeing was a focal point in this game, and it really came to a head in the second period when obvious penalties by Tomas Nosek and Shea Weber were initially ignored, until the referees finally dished out offsetting minors.

Habs fans were furious with the refs tonight, and fans in the Bell Centre were vocal in showing their displeasure.

Each team only had one power play in the game.

Both Weber and Nosek get penalities but come on man pic.twitter.com/5nwij30eAr

The win snapped a pair of streaks for the Canadiens, who were 4-0 in overtime during the playoffs until tonight. Montreal was also previously unbeaten at home since fans returned to the Bell Centre, with the Habs going 4-0 since Game 6 against Toronto. There were 3,500 fans in attendance.

The series now shifts back to Las Vegas for Game 5 on Tuesday, as each team is now just six wins away from the Stanley Cup.