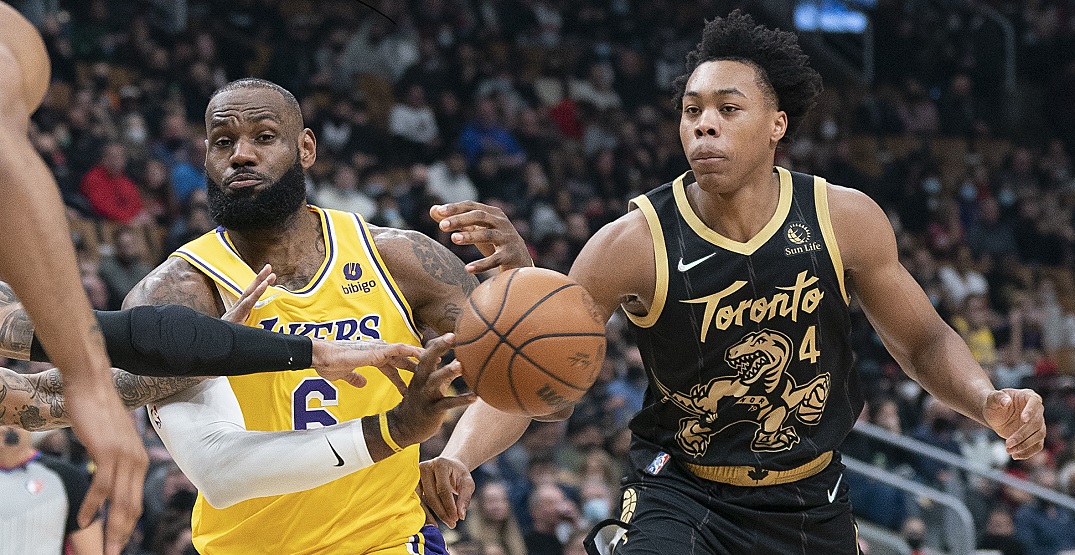 Long before the Toronto Raptors had their eye on Scottie Barnes, he was being scouted by one of the greatest basketball minds of all time — LeBron James.

The 37-year-old James and the 20-year-old Barnes traded shots in an eventual 128-123 overtime win for the Los Angeles Lakers on Friday night at Toronto’s Scotiabank Arena.

James scored 36 points, nine rebounds, and seven assists, while Barnes put up 31 points, 17 rebounds and six assists. Toronto looked like they were on the path to win in regulation with a 116-113 lead and possession of the ball with under 10 seconds remaining, before a Russell Westbrook steal and last-second three-pointer sent the game into an extra period.

RUSSELL WESTBROOK TIES IT UP WITH .4 REMAINING!@Lakers 116@Raptors 116

But while it was just Barnes’ 62nd career NBA game compared to 1,362 for James, the four-time MVP has had the rookie on his radar for nearly a decade now.

“I saw Scottie Barnes for the first time in seventh grade and told one of my good friends that this kid is gonna be special,” LeBron James said post game.

While James didn’t offer any further information about where he saw Barnes play, the timelines match up.

Barnes would’ve been in middle school in West Palm Beach, Florida in the early-to-mid 2010s while James was a member of the Miami Heat.

“I’d seen length of his arms,” James continued about his first experience watching Barnes. “He was playing point guard at his size back then and is obviously still doing it now… he can play multiple positions. For him to have that size and that ability, I knew he was gonna be special.”

The longtime admiration didn’t exactly mean James would take it easy on the rookie, though. On Monday while playing the Lakers in Los Angeles, Barnes shrugged off an incident where James threw a ball towards his face in an effort to keep it inbounds.

Barnes has seen his name in contention for the Rookie of the Year award along with names like Cleveland’s Evan Mobley and Detroit’s Cade Cunningham. James himself won the award in the 2003-04 season while with the Cavaliers.

“I was always talking to my friends about him,” James added. “So it’s no surprise that what he’s doing for me, personally. It could be to some of you guys but to me, I’ve been watching him since the seventh grade. And it’s a beautiful thing to watch.”

James may have been exaggerating a bit about always talking to his friends about him, but he’s definitely right about Barnes being a special talent.

When asked about what James meant to him as a kid, Barnes said he often cheered for a previous Lakers star.

If Raptors fans are in for any luck, James should have many years ahead of being able to cheer Barnes on in Toronto.