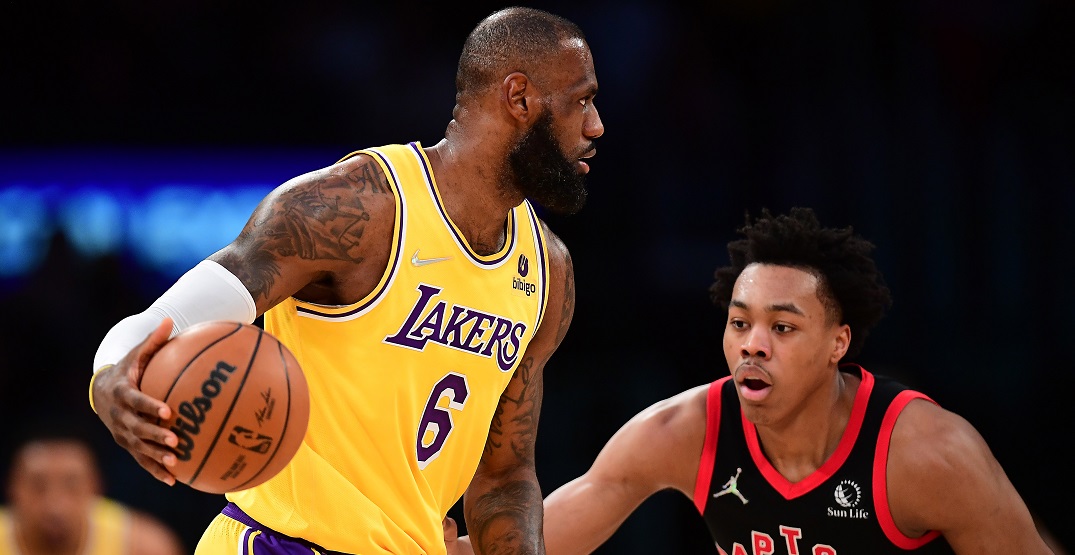 Barnes put up 21 points, nine rebounds and five assists in the Raptors’ 114-103 victory over LeBron and the Lakers.

Toronto moved to 38-30 on the season, while Los Angeles fell to 29-39. With James trying to keep possession of the ball, he directed it towards Barnes with a high degree of force.

“I was on the floor. I just saw him loading up and I thought, oh man,” Barnes said of the play postgame. “So I just tried to cover myself so it didn’t hit me in the face because he put a lot of power into it. Cocked it back, threw it. Damn.'”

Scottie Barnes: "I was on the floor and I just saw him loading up and I thought, oh man. So I just tried to cover myself so he didn't hit me in the face because he put a lot of power into it… I was like, damn." https://t.co/sf4Er2obxJ pic.twitter.com/jFW068QI9l

No foul was called on the play, with the Lakers keeping possession of the ball. Barnes appeared to mostly shake it off, though.

“I wasn’t really worried about it after,” Barnes added. “It was just in the heat of the moment.”

Barnes grew up in West Palm Beach, Florida, near where James spent four seasons as a member of the Miami Heat. Barnes said earlier this season that he wasn’t a Heat fan, but clarified that he appreciated the challenge of matching up against one of the league’s all-times greats.

“Especially in my area… you see him a lot, the way he dominated this league,” Barnes said.”[But] I just went out there and was trying hard to win.”

James dropped 30 points, and added nine rebounds to go along with three assists in the loss.

James and Barnes are set to face off for the second time in five days this Friday, when the Lakers visit Scotiabank Arena.