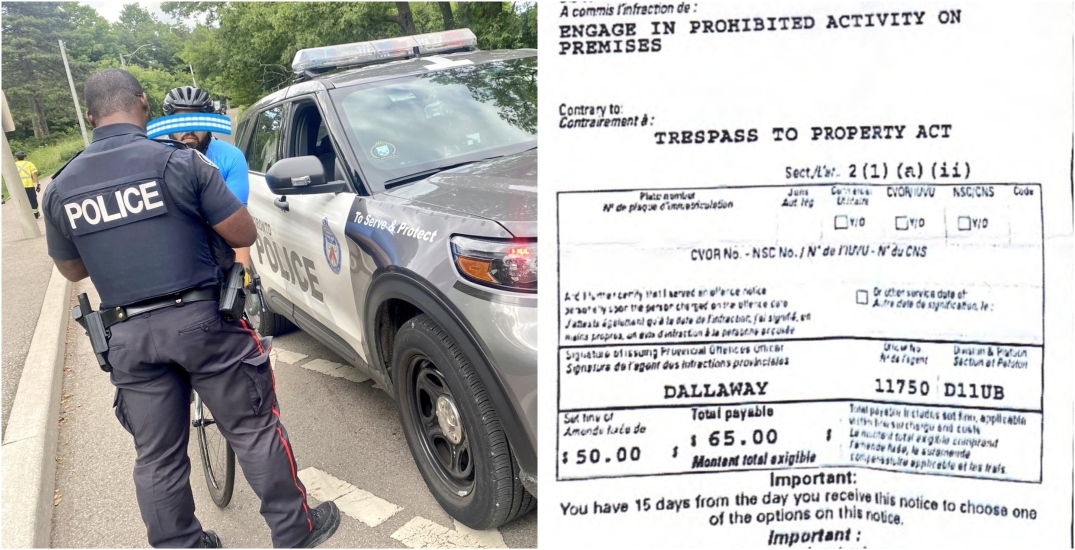 People on Twitter were furious after discovering that a police officer had issued a Toronto cyclist a $65 ticket for going 6 km over the 20 km speed limit in High Park.

And now the cyclist is speaking up about his experience.

In a statement through his lawyer David Shellnutt, the cyclist said that the incident occurred when he had to get around the police officer who’d been driving his SUV in the bike lane.

The police officer then gave him a warning for speeding.

“I asked him not to drive in the bike lane and squeeze people in,” he recalled. “He proceeded to speed up pull up in front of me in an aggressive way and make me stop. I asked the officer if he was detaining me. He then gave me a $65 [ticket] for ‘engaging in prohibited activity.'”

A post shared by The Biking Lawyer LLP (@thebikinglawyer)

In an email to Daily Hive, Shellnutt said that they’ve seen tickets of up to $120 and that incidents like the one described by his client are the norm for the cycling community.

“Their bias is showing,” he stated. “Everyday cyclists tweet at and share images with Toronto police about dangerous drivers and cars parked in bike lanes, every day.

“We get no response. No safety or parking enforcement blitzes that would send a message that the City of Toronto takes cyclist safety seriously.”

However, according to Toronto police, members of the High Park community who’ve complained about speeding cyclists and drivers have welcomed these changes.

“Our approach has been to educate and caution cyclists who are speeding or committing offences such as failing to stop at stop signs, and on some occasions, to issue Highway Traffic Act tickets, when necessary,” police explained in an email to Daily Hive, adding that officers can use their discretion when deciding to ticket.

In an email addressed to Mayor John Tory, Shellnutt stated that resources would be better spent “targeting the statistically more significant traffic violations and dangerous driving caused by motorists.”