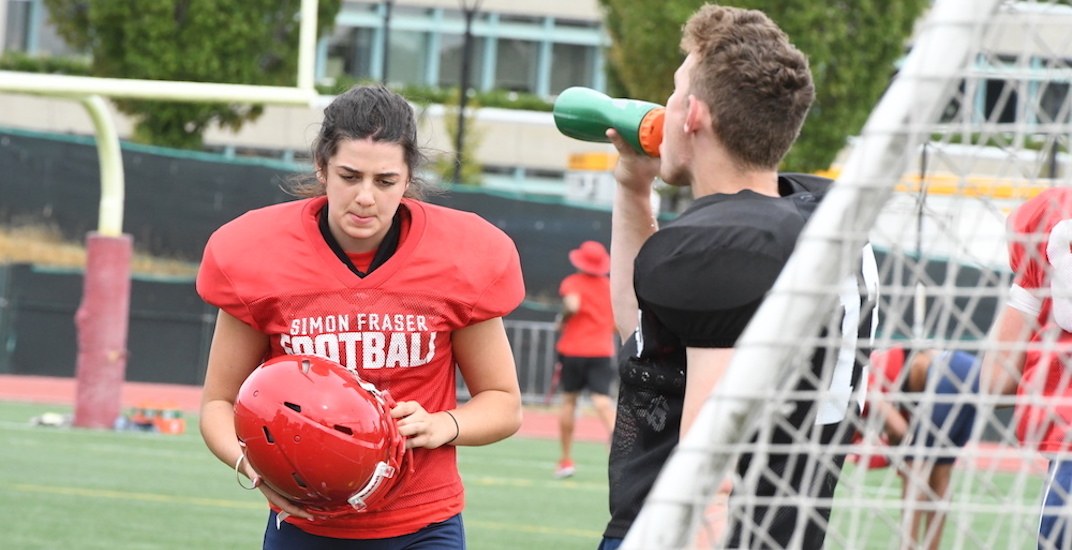 History will be made at Swangard Stadium in Burnaby on Saturday.

Kristie Elliott, a surprise walk on addition to the SFU football team this summer, will suit up for the first time, the university has confirmed with Daily Hive. No woman has ever appeared in a football game for a Canadian university and Elliott is looking to become the first.

The 19-year-old from North Vancouver got the attention of SFU head coach Thomas Ford after seeing a video of her nailing a 40-yard field goal. The video was the product of a bet Elliott made with some friends of hers on the football team.

Despite not having any prior football experience (she was previously on the track and field team as a hurdler), the Windsor Secondary grad proved it was no fluke in tryouts, and earned a spot on the team.

🚨Day 2 Report🚨
Today our players had 6 gassers but @CoachTFord gave K’s a chance to eliminate them. Rookie Kicker Kristie Elliott stepped up and with ❄️ in her veins and nailed a 30 yd FG to eliminate ALL the condo!#RepTheLeaf🍁⁦@SFUFootball⁩ pic.twitter.com/kWANZ90INP

Elliott is one of two place kickers on the team, but didn’t travel for SFU’s first two games of the season — both on the road. But she’ll suit up against the South Dakota School of Mines and Technology for the home opener, and rumour is she’s likely to enter the game at some point, which kicks off at 6 pm.