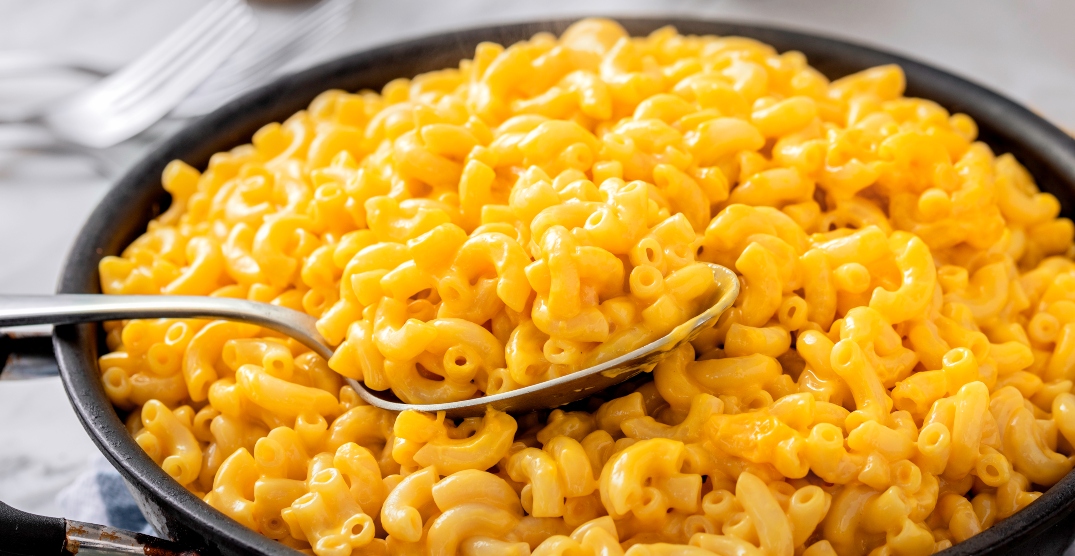 Kraft Dinner is a Canadian classic.

And we’re not talkin’ Macaroni & Cheese as our American neighbours have — we mean classic KD, the good stuff.

Kraft Dinner has deep roots in Canada. A representative for Kraft Canada tells Daily Hive that the patent for a packaged and processed cheese product was invented by Ontario native James Lewis Kraft in 1916.

Kraft Dinner was first introduced to American and Canadian markets in 1937 and the rest is history. Cheesy, tasty history.

Speaking of history, here are some facts about KD that you might not have known. Try mixing these cool factoids into your next scrumptious bowl of Kraft Dinner.

According to Heinz-Kraft, seven million boxes of Kraft Dinner (or Macaroni & Cheese) are sold every week globally. Of those, 1.7 million are sold right here in Canada.

That means Canadians make up 24% of Kraft Dinner’s weekly sales.

Every Canadian eats more than three boxes of KD per year

Canada’s consumption of Kraft Dinner is so frequent, it averages out to 3.2 boxes of KD per Canadian every year.

There are 22 different variations of KD

While the classic (aka “The Cheesiest”) is the landmark meal, there are 22 different varieties of Kraft Dinner.

Someone once ate a box of KD in 30 seconds

According to recordsetter.com, a teenager from Michigan ate a box of Kraft Macaroni & Cheese in 30.50 seconds in 2017.

There’s a video of it if you’re really curious…

Over 50 million boxes were sold during World War II

Because of its alluring price and the ability to satisfy people’s dairy cravings for a long time, 50 million boxes were sold in 1943 alone.

The powdered cheese was originally attached with an elastic

Originally, salesmen would go door to door selling the dried pasta and powdered cheese mix attached to a box with a rubber elastic band.

The idea was tweaked before market launch and the cheese packet iconically went INSIDE the box.

Mac ‘n cheese recipes date back to the 18th century

According to the Smithsonian, the earliest known recorded mac ‘n cheese recipe was written down in 1769.

Kraft Heinz says 56% of parents served the iconic dish more often as breakfast during the pandemic.

How do you like your Kraft Dinner? Do you add more milk to your pot of KD or more butter? Maybe you’re a hot dog fan? Sound off in the comments below.