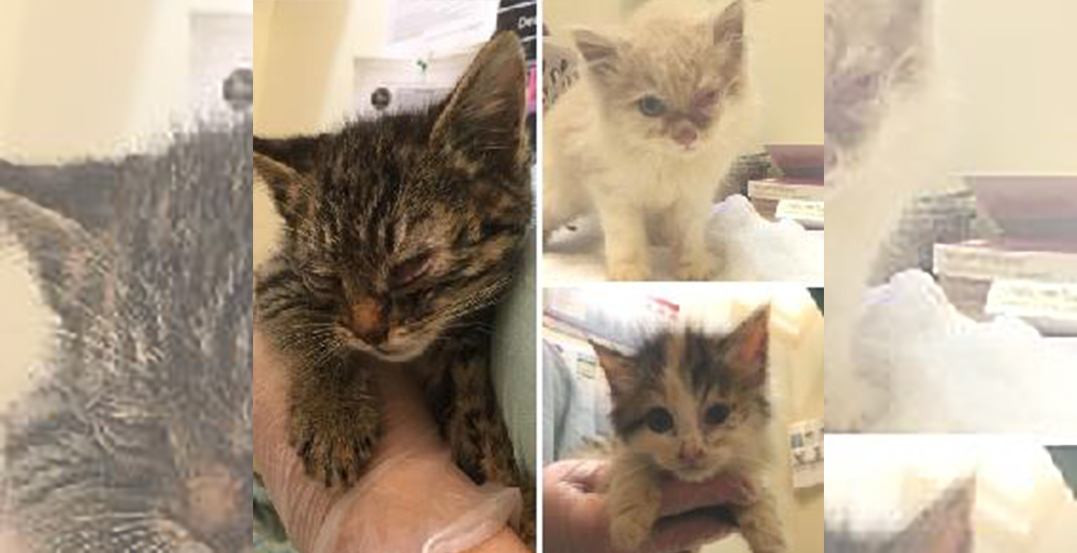 All images courtesy BC SPCA.

Warning: The photos included in this article may be disturbing to some readers.

Veterinarian bills are expected to top $5,100 for a litter of kittens found in such horrendous condition one of their eyes needed to be removed.

A Good Samaritan found the sick and injured litter mates living outdoors in a feral colony. When they arrived at the BC SPCA, they were found to be suffering from a range of medical issues, including eye infections so severe their eyelids were glued shut.

Eyes of the feral kittens (BC SPCA)

The kittens — dubbed Leo, Iris, Georgia and Vader — are “lucky to be alive,” says the animal welfare agency.

The animals were rushed into emergency care and put on IV antibiotics. But still, it wasn’t enough — and the felines aren’t out of the woods yet. At least two of the kittens require eye surgery. 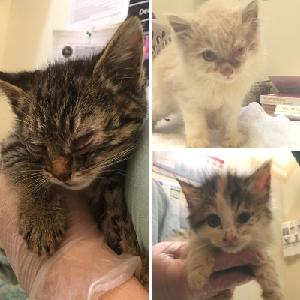 The rescued kittens recovering in shelter. (BC SPCA)

“Unfortunately one of Iris’ eyes was so badly damaged it had to be removed, and now Vader will also have to have the same surgery,” the BC SPCA’s Amy Stacey said in a statement.

Georgia and Leo weren’t as far gone but still required around the clock care to save their lives.

The litter is being cared for at the Prince Rupert shelter. The tiny shelter is overwhelmed by the cost of the treatment, and is crowdfunding to pay the bills. Their goal of $5,100 includes surgery, medications, vaccinations and daily care until they are ready to be adopted into forever homes. Any additional funds will provide care for other animals.

One of the kittens after undergoing surgery.

“Despite their rough start to life and all their challenges, these little babies are so courageous and determined to survive,” said Stacey.

“We believe that these little lives are worth saving.”

Click here to donate or learn more about the campaign to save these kittens.