Support for the Kinder Morgan Trans Mountain Pipeline Expansion has grown during the past few months of boycotts, legislative maneuvers, and spending suspensions, according to the Angus Reid Institute.

Results of their most recent survey show that just over two-thirds of Canadian respondents believe that the BC government is wrong to oppose the pipeline expansion project, going up 9% from when the survey was last administered in February.

Opposition to the project has held firm in BC, however, with 40% of BC respondents being against in February, and 38% still standing against it in April. 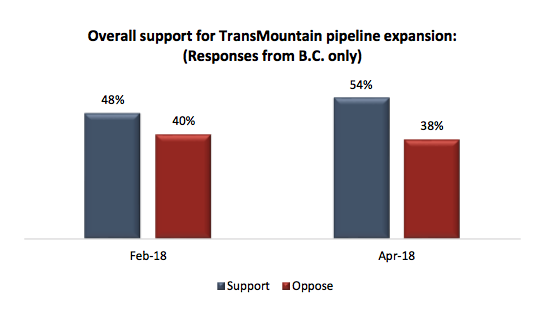 That resistance may weaken after results come through from the courts, as 69% of BC respondents stated that the province should allow the pipeline to be built if the courts rule that BC does not have the constitutional authority to block the pipeline.

The major concern for British Columbians, according to the survey, was the risk of an oil tanker spill or accident. 52% of BC respondents cited that as the risk they were most concerned about, followed by the overall environmental impact of extracting and burning more fossil fuels (16%), and the chance of major leaks or breaches in the pipeline itself. 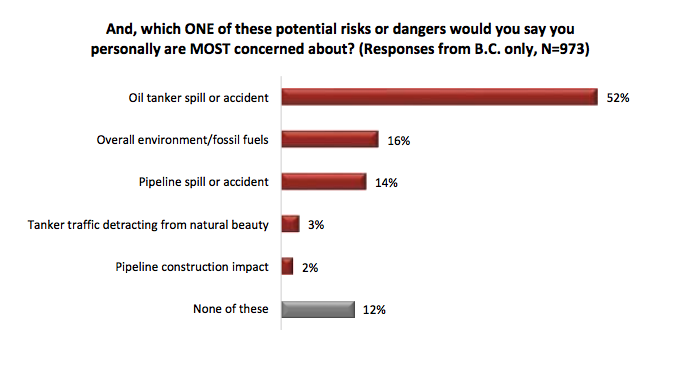 Kinder Morgan halted all non-essential spending on the project this past month in the wake of uncertainty caused by the BC government, and the company has set a May 31 deadline for a decision on if it would go forward with the project, or scrap it.

Both the federal and Alberta governments are looking at legislation that would incentivize BC to end its opposition to the pipeline, but Canada’s westernmost province appears to have dug in its heels for the long-haul, taking the matter to court and filing for a reference case.

BC Premier John Horgan has stated that, if the courts rule against his government, he would accept the decision.

“It’s my view that, should the courts render a decision that’s counter to our position, then that’s the way it should be,” he said following a meeting with Prime Minister Justin Trudeau and Alberta Premier Rachel Notley on Sunday.