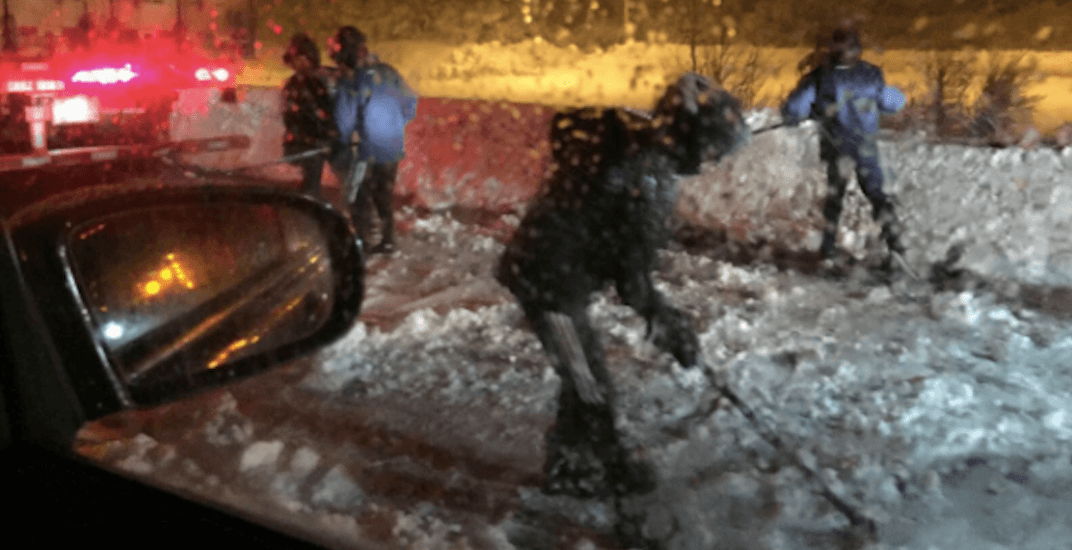 When people think of Canada, there’s a good chance these three words come to mind.

But what happens when these three words are combined into a single scene?

Such was the case recently on the Coquihalla Highway between Hope and Merritt.

On Sunday, a vehicle incident on the highway resulted in a closure of the heavily used route.

UPDATE – CLOSED – #BCHwy5 – The #Coquihalla is closed between #HopeBC and #Merritt due to vehicle incidents. More info: https://t.co/iP8F5OnS1W

This meant that many motorists who were returning from – or leaving the city – at the end of the weekend were stuck and had no choice but to wait out the storm – literally.

And while being stuck on a highway in the dark during a snowstorm can be frustrating and and unnerving for some, a group for good Canadian kids decided to make the best of the bad situation in the most Canadian way possible: An impromptu, improvised game of hockey.

The moment was captured on camera and posted to Twitter by pinandtonic.

#coquihalla closed? No problem. Only one thing for it… #onlyincanada #hockey #explorebc #everycloud @DriveBC pic.twitter.com/rkabITDC9C

Eventually, the highway was reopened.

And while we are just at the beginning of winter that is set to bring a lot more snow before the season’s end, it looks like these kids are prepared to weather whatever is in store for us this season.

Now those are good Canadian kids!