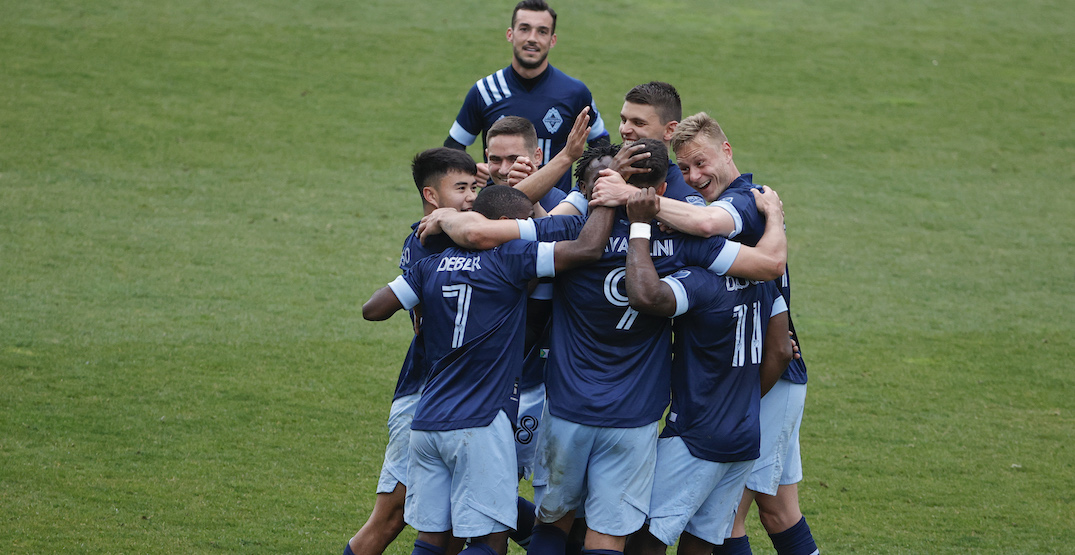 The Vancouver Whitecaps season is about to get underway on Sunday (7 pm on TSN) when the ‘Caps host the Portland Timbers at their new home-away-from-home in Sandy, Utah.

The pandemic has forced all three Canadian MLS teams to relocate to the United States this season, but there is a hope that the Whitecaps will be able to return to BC Place later this season.

The 2020 season was a chaotic season for the Whitecaps. Whether it was stopping in March because of COVID-19, playing in the Orlando bubble, relocating to Portland, the ‘Caps went through it all. Despite those hurdles, Vancouver  finished with a 9-14-0 record and just one win out of the final playoff spot in the West.

Whitecaps No.1 goalkeeper Max Crepeau is heading into the season feeling focused and ready to rock.

“We have a locker room that knows each other from the years before, which is good,” Crepeau explained to Daily Hive. “There’s a foundation of guys that have been together and there’s new addition that will raise the quality on the field. With the core group plus the new additions, I really feel good about this season.

“The guys are tight, we have good human beings that are ready to compete go up front to battle for three points every single day. To be fair, I’m really confident. There’s an atmosphere on the field with the guys.

“It’s going to be tough to beat us this year and we want to be in the face of the opponent.”

When he looks at you and says "this is when people start saying 🤬 playing the Whitecaps" 🥰#VWFC | @Bell pic.twitter.com/rkrMbokj39

The Whitecaps made three strong additions with the positions of right back, winger, and midfield being the focus. It wasn’t all roses, as Vancouver missed out on acquiring a much needed playmaking midfielder to assist Cavallini offensively.

Bruno Gaspar is the star off-season acquisition for Vancouver. The 27-year-old right back joins the Whitecaps on loan from Portuguese Primeira Liga club Sporting CP. Gaspar is expected to add a one-two punch at full back with Ali Adnan on the other side. Gaspar should provide a significant boost at right back over Whitecaps first team veteran Jake Nerwinski.

Deiber Caicedo will be expected to contribute to the Whitecaps offence right away. The creative winger will start the season leading the attack alongside Cavallini, likely in a 4-4-2 formation.

The 21-year-old Colombian has already formed a bond with fellow Whitecaps Colombian winger Cristian Dajome. Caicedo joined Vancouver from Colombian club, Deportivo Cali. He has signed a three-year contract with a club option in 2024.

Caio Alexandre is an exciting box-to-box midfielder that should give the team more quality options in the midfield, as the 22-year-old has a strong attacking mindset.

Alexandre joined Vancouver on a four-year contract rom Brazilian side Botafogo with a reported fee of $4.4 million.

The first fixture of the campaign will see the Whitecaps missing several first team starters.

Ali Adnan is back in Vancouver waiting for his visa situation to be sorted. Once that is approved, Adnan will have to quarantine in Utah for five days before he can practice.

Currently, three new Whitecaps players are in the quarantining period and have yet to practice with the club. Injuries have also hit the team with a pair of prominent centre backs, a central midfielder, and winger Tosaint Ricketts unavailable for the Cascadia clash.

“Ali is still with the visa situation,” Marc Dos Santos explained to reporters via Zoom. “Ali’s not with us here right now. Bruno (Gaspar), David (Egbo), and Caio (Alexandre) are all still quarantining, so not training with the team. For now, Derek (Cornelius), Erik (God0y), and Leo (Owusu) for now, out.”

One of the biggest challenges the Whitecaps will face isn’t on the pitch. The logistical manoeuvring to get the team, club staff, and organization personnel in Utah has been an adventure.

Whitecaps players have been able to bring their wives/girlfriends, kids, and pets to Utah, but all of that has to be setup with US visas and proper paperwork. There is also the matter of finding school, child care for kids, making sure players can drive in the US and sorting out everything from banking services to finding a grocery store.

This trip's a family affair for Dajo 👨‍👩‍👧‍👧💙#VWFC | @Bell pic.twitter.com/npqMyHuKkp

Nerwinski and his wife Allie Auletta are both American citizens and they’ve had an easier time getting set up in Utah. Cavallini, his wife, and three kids are still waiting for the all-clear to join up together as a family in Utah. Embassy problems have delayed their arrival.

“I think that’s the most important part this year,” Cavallini explained. “Knowing last year, when we were in Portland it was tough spending a lot of time away from the family. Not only players, but also the staff. It’s good to see everybody together.

“Unfortunately, my family is not here yet. The day will come, we’re still waiting on confirmation. Hopefully before the first game, they’re here, that’ll be a big motivation for me. I’m happy that everybody’s in a comfortable place. The club has provided us with all the resources that we need.”