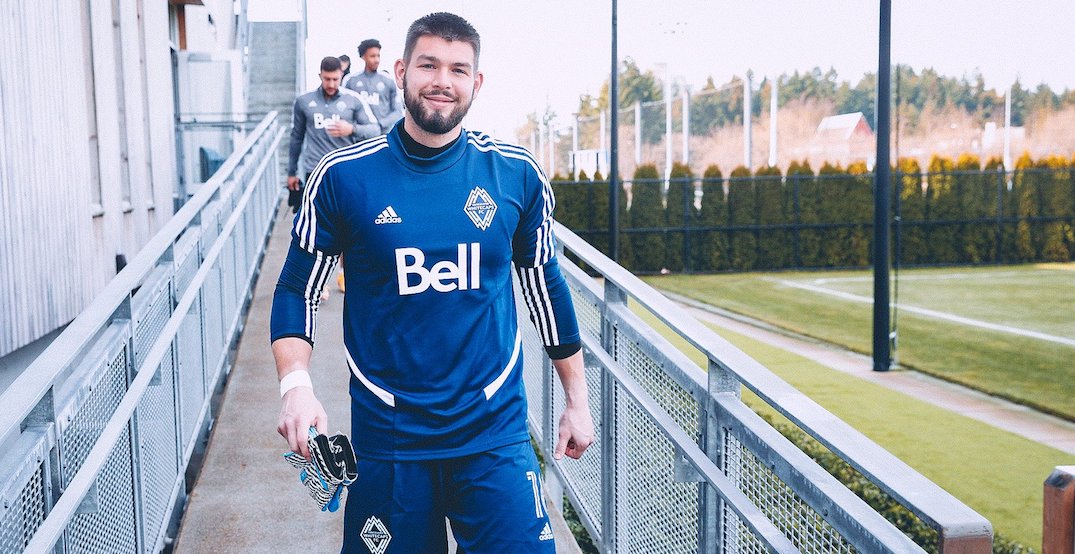 In a sports city as rabid as Vancouver, fans love a good old fashioned goalie controversy. Whether it’s Roberto Luongo and Cory Schneider with the Canucks, or more recently between David Ousted and Stefan Marinovic with the Whitecaps, it has a way of getting people talking.

As the Vancouver Whitecaps prepare for the 2021 MLS season, there’s potential for another goalie controversy.

2020 was a disappointing season for the Vancouver Whitecaps, but was even more so for goalkeeper, Max Crepeau. The Whitecaps keeper had a breakout season in 2019, with a career high in wins, shutouts, saves, minutes played, and games started, but the pandemic shortened 2020 campaign was a disaster for Crepeau.

The 26-year-old was limited to just four starts after he fractured his left thumb in a collision against the Seattle Sounders on July 19 during the MLS is Back Tournament. Crepeau would end up being sidelined for the remainder of the season.

In stepped youngster Thomas Hasal, who started eight consecutive matches from July 23 to September 19, posting a 4-4-0 record in his first taste of Major League Soccer before suffering a concussion and a stress fracture to his tibia.

As the Whitecaps get set to open training camp on March 8 at UBC, Crepeau and Hasal are both healthy and fully fit. There will no doubt be a fierce battle throughout preseason to determine which goalkeeper can show that they’re ready to be the number one goalkeeper.

Who will that be?

“The best guy to fit the job and help the team win,” Crepeau explained simply in an exclusive interview with Daily Hive. “That’s the guy who is going to be in net and it should be in every team and place.”

The Greenfield Park, Quebec native had to build up his fitness, cardio, and muscle in his left hand. January marked the six-month mark of Crepeau’s injury.

“I’ll work my butt off to be that guy,” Crepeau said. “It’s been three years since Marc (Dos Santos) took this job. We had the 2019 re-build, and 2020 was difficult with the pandemic. It’s the third year of the re-build so players, staff, fans, we all want to get somewhere, even journalists. It’s not fun to follow a team that’s been struggling sometimes.

“We want to make a good year out of 2021 even though we know the current situation is not solved and we might face adversity. We want to be out there for 2021.”

The Whitecaps are all about facing adversity, whether it’s having to relocate to play in Portland, Oregon, or having to deal with significant visa issue delays when acquiring players. Vancouver has had their fare share of adverse inconveniences.

After being away from the MLS routine of playing matches, training, and traveling, does Crepeau have the confidence, drive, and determination to be the Whitecaps number one goalkeeper?

“I do,” Crepeau said. “I feel great about myself. I felt more comfortable during the January camp with the national team than in the MLS is Back Tournament in Orlando. I felt better this January than last summer. My fitness is different. I had to learn to basically reuse my hand, and how to play with it. It’s a brand new approach that I have to learn to go through.

“I feel really great to be honest with you. I can’t wait to go on with the guys on the field to be back at it with them, I miss them. Club level, it would be good to be back with the guys, because last time I saw them, we were in Portland.”

The Whitecaps announced on Monday that for the first time since entering MLS in 2011, they’ll spend the majority of preseason in Vancouver. Just where they’ll play their home games once the season starts is still yet to be announced, though Salt Lake City has been rumoured.

It’s going to be a massive year for Crepeau and that also extends to the Canadian men’s national team, after the pandemic postponed several FIFA World Cup Concacaf qualifying matches. If Canada is going to earn a spot at the 2022 World Cup in Qatar they are going to have to go through a gauntlet of rescheduled qualifying matches in 2021.

When Crepeau isn’t in his Whitecaps kit, he will be donning the red and white during FIFA windows in March, June, and July. Crepeau isn’t the only Whitecaps player who will most likely miss larges chunks of the up coming MLS season, as Lucas Cavallini, Derek Cornelius, Cristian Gutierrez, Theo Bair, Tosaint Ricketts, Ryan Raposo, Patrick Metcalfe, Russell Teibert, and Hasal could all be called away to represent Canada at the senior and Olympic team level.

How will Crepeau balance a heavy work load for club and country?

“There’s a fact of knowing your body,” Crepeau explained. “Now we know there’s going to be a lot of travel in the international windows and games played. You react, and you readjust. If I do not feel one hundred per cent one day, how am I going to recover, manage the workload in the between games.”

If that wasn’t hectic enough, Crepeau and his wife Cristina Dagenais are expecting their first child this summer.

“She is five months and a half now,” Crepeau revealed. “She is due in June. There’s going to be some questions asked and we will react when it comes. We’ll act, when we know facts. It’s definitely something that we need to think about, when it happens, we’ll have a plan and we will go from there, but right now, we’re a little bit in the dark.”