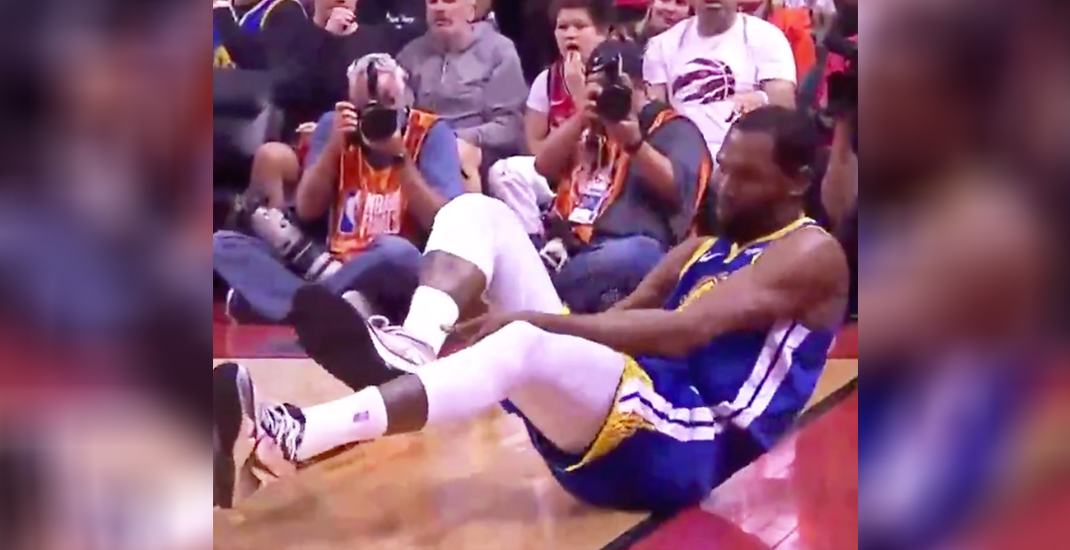 The Golden State Warriors have walked away with Game 5 of the NBA Finals, but Kevin Durant is likely done for the series.

The 30-year-old played a total of 12 minutes before leaving the game indefinitely. Warriors President of Basketball Operations Bob Myers confirmed after the game that Durant suffered an achilles injury.

Video replay shows the power forward injure his right leg with 9:46 left in the second quarter.

I’m just so damn sad right now. The Finals: Ruined! I wanted to see @KDTrey5 come back so badly. He was ballin, too. En route to dropping 40 the way he was looking. Then this. Damn! Damn! Damn! pic.twitter.com/Uxlyd1jInf

He was quickly helped off by teammates and Warriors staff.

If this is Kevin Durant’s final scene in a Warriors uniform, he’ll go out having ended two seasons as Finals MVP and the third powering back into a Finals (and giving 12 damn good minutes) before popping a calf that, we can see now, clearly wasn’t ready. pic.twitter.com/Yamy2wToDe

Drake consoled Kevin Durant as he walked off in the second quarter. pic.twitter.com/05ZpHdL49l

Shortly after, the Golden State Warriors confirmed that Durant would not return to Game 5 and that he would receive an MRI on Tuesday.

Kevin Durant (right lower leg injury) will not return to tonight’s game. He will get an MRI tomorrow.

He was also seen leaving Scotiabank Arena in a walking boot and crutches.

Kevin Durant is seen on crutches and in a walking boot at Scotiabank Arena. pic.twitter.com/4r7M0QrY7T

Durant’s appearance in the NBA Finals may have been shortlived, but his impact was undeniable, as he managed 11 points in the span of 12 minutes.

This was the Golden State superstar’s first game since suffering a calf injury May 8 against the Houston Rockets in the second round.

The Raptors will be looking to rebound in Game 6 at Oracle Arena on Thursday. The series stands at 3-2 for Toronto.