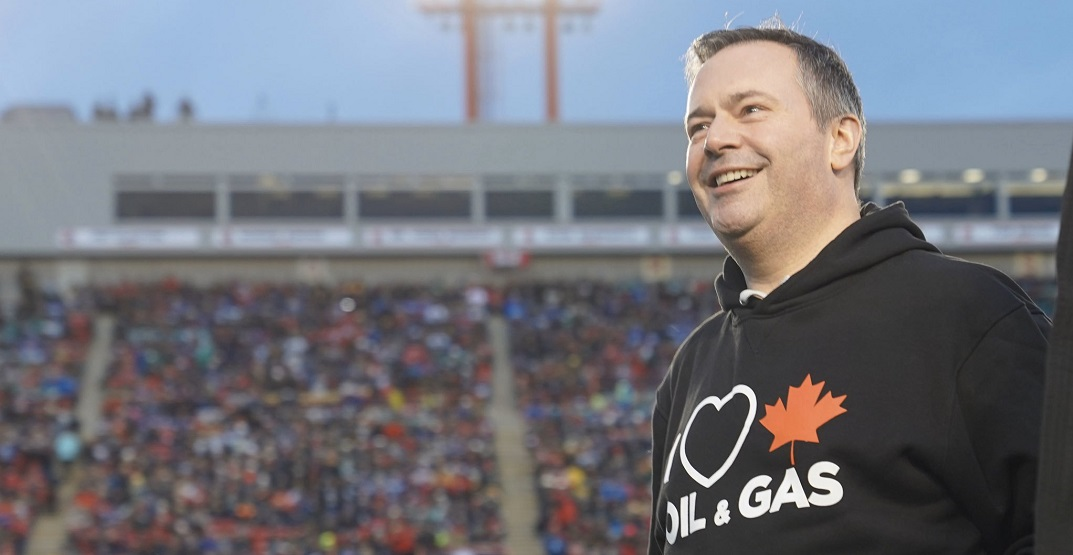 Hosted by Calgary, the game saw the premier introduced prior to the coin flip, who could be seen wearing a black “I Love (Canadian) Oil and Gas” hoodie.

The crowd at McMahon Stadium can be heard seemingly “booing” the premier during his official introduction, and many online are stating that the message he was displaying across his chest was the cause.

Great to see @Wpg_BlueBombers win it after a 29 year drought!

We need traditions like the @CFL Grey Cup to help bring us together across our huge, diverse country. pic.twitter.com/pm53aLzAJg

A few called out the premier for politicizing the Grey Cup, as they saw it, while others were supportive of the pro-pipeline display.

Much of the criticism was fueled by the recent cuts that were included in Alberta’s 2019 Budget, which will see a 7.7% reduction to the public sector by 2022, a 2% wage reduction for public sector workers, a complete freeze on education spending, and a cancellation of Calgary’s plans to host the X Games in 2020.

I know the left loves a fake narrative to spin but I was at #GreyCup2019 and @jkenney was overwhelmingly cheered by the crowd. People loved the I ❤️ 🇨🇦 Oil & Gas gear. #ableg

If only Jason Kenney wore a hoodie saying that he loved Alberta students, or loved Alberta seniors, or the loved the poor and disadvantaged in Alberta. This is regression on display for the whole world. #abpoli #cdnpoli pic.twitter.com/ssitMUeOsi

Really quite amazing that some on Twitter find the Premier’s hoodie at Grey Cup offensive or inappropriate. Yes, the Government of Alberta supports Canadian oil & gas – and if you reap the benefits of modern society, you should too! @ericnuttall @CanadaAction #ableg #cdnpoli https://t.co/c6i0KWAynb

Jason Kenney just got booed at the Grey cup game in #calgary.

Jason Kenney. I ❤ 🇨🇦 Oil & Gas. That great! What about the rest of us? pic.twitter.com/expgxnOHCM

When you choose to politicize what is supposed to be a non-partisan event. #ableg https://t.co/mS83bSHVaZ

Kenney was also seen wearing (and not wearing) the hoodie earlier in the day when meeting with Manitoba Premier Brian Pallister.

Great to catch up with my friend #Manitoba Premier @BrianPallister before today’s big game.

He’s all decked out and feeling pretty good about the @Wpg_BlueBombers chances in the #GreyCup later today. #GreyCup107 #GreyCup #Bombers pic.twitter.com/87HyfSmYMj

The Winnipeg Blue Bombers won the 2019 Grey Cup by a score of 33-12 over the Hamilton Tiger-Cats on Sunday.