Presented on Thursday, the budget includes a 7.7% reduction to the public sector over the next four years — through “targeted reductions, mainly through attrition, coupled with restraint in the broader public sector” — to save an estimated $552 million in pay by 2022-2023.

The province also plans to reduce compensation by 2.1% over the same span of time, accounting for a portion of the 2.8% reduction in overall operating spending. 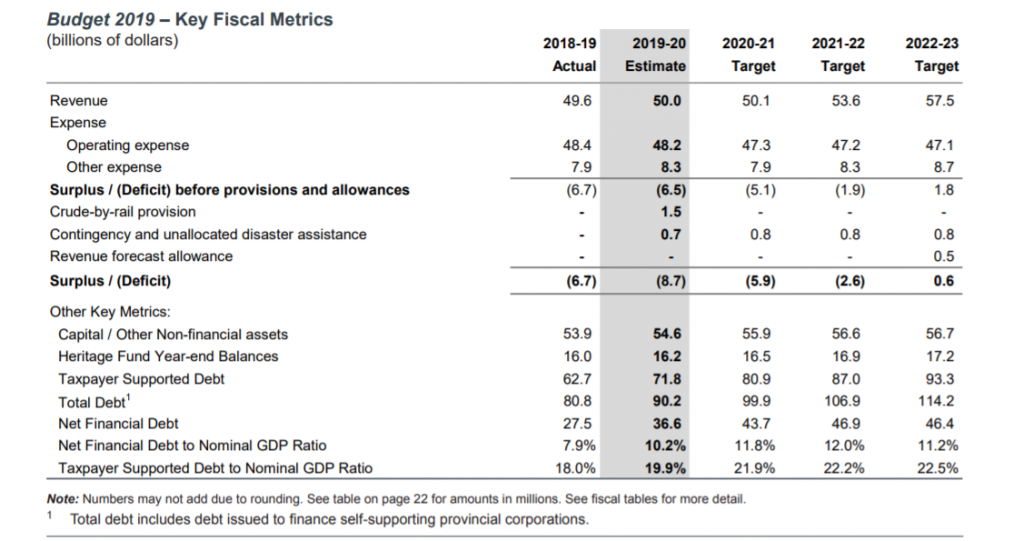 The hotly contested crude-by-rail plan that former Premier Rachel Notley put into place in her last year in office will be thrown out at an expense of $1.5 billion, though Kenney noted in his budget speech that “the program would have paid out $10.6 billion in expenses to get back $8.8 billion in oil revenues.”

Kenney reconfirmed that Alberta will be moving forward with the 4% corporate income tax cut, dubbed the Job Creation Tax Cut, bringing the rate down from 12% to 8%.

“Economists Jack Mintz and Bev Dahlby estimate that the Job Creation Tax Cut will add up to 55,000 jobs by 2023,” Kenney stated in the speech.

“My own ministry estimates that the Job Creation Tax Cut will boost real investment by approximately $4 billion per year by 2023.”

Alberta’s total debt is expected to reach $93 billion by 2023, according to the budget. Kenney noted in his speech that Alberta’s current debt of $63 billion eats up about 3.5% of the budget in income payments — $2 billion a year, or $5 million a day.

The province’s revenue, which is currently sitting around $50 billion annually, is expected to increase by $7 billion by 2023 — driven mostly by bitumen royalties and income tax — banking on “accelerated growth as pipelines become operational.”

Other revenue is expected to take a hit from “sluggish economic condition” in 2019 but is expected to rise by 2023 through increases to motor vehicle and land title fees, museum admissions, statements of health benefits paid fees, and rental rates for grazing leases.

New fees for Alberta Immigrant Nominee Program applications and other services will also factor into the expected $8 million revenue increase.

The full budget can be found at the Province of Alberta’s website.