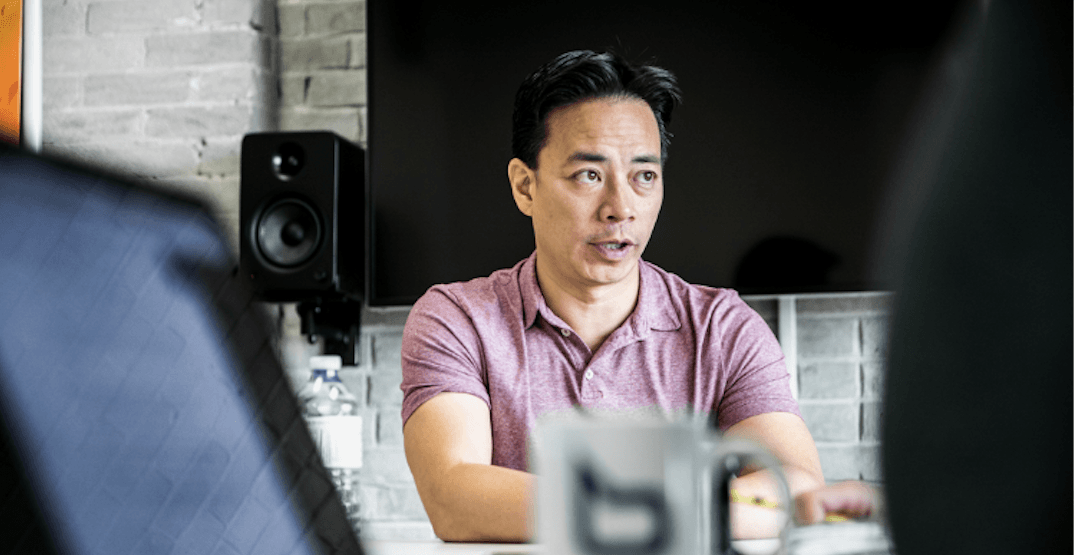 Ken Sim said he has a “deeply personal” reason for running in this month’s municipal election in Vancouver.

“I love the city and I’m running because I have family, friends, co-workers and mentors who are leaving the city. We’ve lost a whole generation of young people, most of whom aren’t coming back, and we have seniors who are either being forced out of their homes or leaving by choice.”

It’s a trend that Sim, the mayoral candidate with the Non-Partisan Association (NPA), hopes to reverse if elected.

And this week, Sim sat down with Daily Hive to talk about how he plans to offer that help.

Noting that he is the son of immigrants in a family that “struggled to find rental accommodation in the city for over a decade,” Sim said he has lived the issue many people are currently facing and that the issue of housing and affordability is an issue “dear to his heart.”

In the city today, he said, there are a couple of issues at play, the first being the actual cost of housing, and the other being the issue of incomes.

To drive his point home, Sim used a comparison between Vancouver and San Fransisco.

For the most part, he said, “real estate prices are roughly the same in the two cities. However when you actually look at it from an affordability perspective relative to incomes, Vancouver is actually about 33% more expensive than San Fransisco, because we don’t have the incomes to support the prices.”

Sim said that while other candidates are offering long-term building and housing plans, relief on the housing supply front is actually needed “almost immediately.”

As such, part of the NPA’s housing platform is a push for two secondary suites in homes across the city.

“The reason that is important is there’s over 40,000 homes in the city and we can provide almost immediate relief to the affordability issue in Vancouver.”

Sim said the housing situation in the city is supply-and-demand economics and that right now, “there’s a short squeeze on supply because there aren’t that many units available so prices are going up across the board.”

He elaborated on the idea even more, “saying that if just 3,000 homeowners bought into this idea, that could actually create housing for 6,000 to 10,000 people, which should put downward pressure on rental accommodations in townhomes and condos as well; it doesn’t take a lot.”

The potential to add that much supply “without having to take a bulldozer to our city, or having to wait two or four, or six years to build, it’s the best solution that we have,” he said.

“Our housing plan isn’t sexy, but it’s highly effective and it will actually solve most of the issues almost immediately,” he said. “We plan to build purpose-based rentals on city-owned land as well, but we don’t talk about that, because we want to talk about what we can do right now. If you tell me you can solve the affordability crisis in four years, that doesn’t do anything for me today or tomorrow.”

Sim said that when it comes to supporting businesses and economic growth in the city, it comes back again to housing and affordability.

“We have to get the housing situation figured out or else we can try and attract people all day long, but if people aren’t going to be able to afford to live here, we won’t have a pool of talent, and we’ll have the gutting of our city,” he said.

To this end, Sim said there are two major things the city can control: the permitting process and commercial property taxes.

“People have to realize there’s a human cost as well when businesses wait and wait for permits,” he said. “We have to we have to do everything we can to speed up the permitting process.”

The second that needs to change, he said, is the way commercial property taxes are assessed.

Right now, Sim explained, “commercial properties are taxed on what is assumed to be the best possible use.”

What this means, is that “a one storey business can be taxed on essentially, imaginary condo floors in a 50-unit building.”

As a result,” you have people whose annual taxes are as much as their rent and that’s why you’re seeing the gutting of Davie, Denman, West 4th, Broadway, Commercial Drive, and downtown. It’s getting out of control, and that’s a battle we’re going to be fighting.”

Sim said part of this will be a fight for split assessments and working with BC Assessments and the provincial government on the issue.

“Otherwise in 12 to 18 months, we’re not going to have any small businesses and condos will be in their place all across the city.”

On the subway extension from Arbutus to UBC

“I’m incredibly excited about the line going out to Arbutus,” he said. “I will also support [an extension to UBC] – if both UBC and TransLink are ready with their plan and they’re ready – I’ll be ready as mayor to support it, period full stop. What some people are trying to do is twist this and make it a wedge issue, saying I don’t support it.”

Sim said he’s done his homework on the issue and the message he wants to get across is that currently, “two-thirds of the ridership that rides along Broadway from Commercial-Broadway ends by the time you hit Arbutus.”

Still, he said, “if UBC and TransLink support it, I support it, if they don’t I won’t, so whatever they say we’ll find a way.”

Sim said he recognizes that the issue of homelessness extends beyond the boundaries of the city, the province, or even the country. But on a local level, there are still things he would like to see happen to help curb the trend of people living on the streets.

Noting that over a million dollars goes into the Downtown Eastside “every single day” and that there are over 200 community groups working in the neighbourhood, Sim said the issue is not a lack of financial or personnel resources.

“It is a lack of coordination and political courage.”

Sim says it’s time to learn from what hasn’t worked well and improve upon it.

On the ‘No-Fun City’ image

Sim isn’t a stranger to the fact Vancouver struggles with its “No Fun” reputation.

“I have four boys,” he explained. “My eldest turned 17 in July and he doesn’t see a future for himself, or his friends in this city and it’s not because of affordability. He’s thinking of job opportunities, but he’s also thinking Vancouver isn’t cool.”

It’s an image Sim wants to change. In fact, he noted his team has a “whole group of individuals helping us on this right now – we’re going to make Vancouver a fun place.”

Sim said that when people travel they tend to pick spots often because of their “cool” factor, and that includes both big and little things.

Little things, he said, “like being able to drink alcohol in our parks; we want to open it up. Being able to buy beer or a bottle of wine in our corner stores. Patios: Having patios everywhere, opening it up and giving permits right away.” 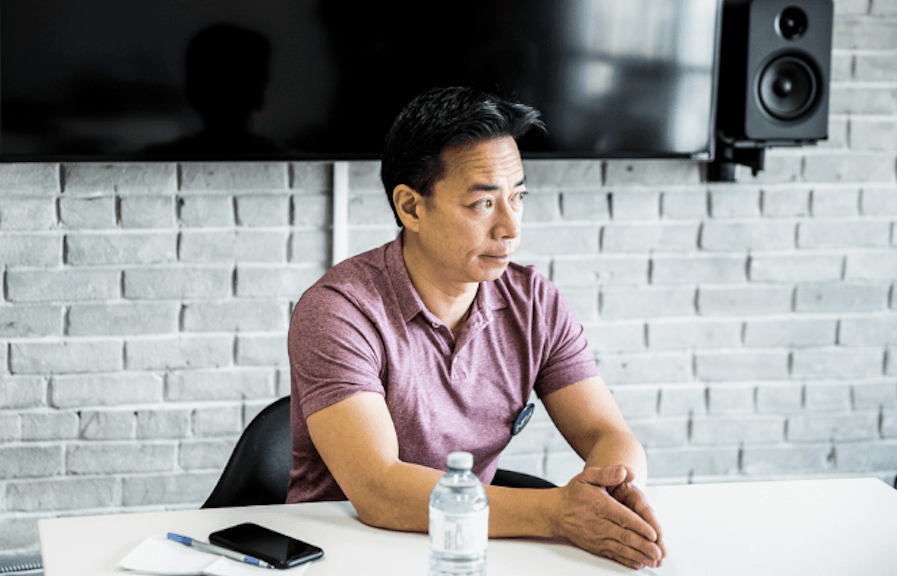 In terms of long-range planning, “it’s about how we build our city and future development – we need to build wider sidewalks for example. In Europe, the reason you get a buzz in some of the cities is they have incredibly wide sidewalks with restaurants built on them and an overflow of people.”

Sim would also like to see more outdoor concerts and festivals come to the city, and hold on to the ones that are already here, such as Skookum. He also wants to bring more open-air viewing events to the city.

Finally, he said, “we should have world cup here and as mayor, I’m going to be fighting for that – it’s not over.”

For community events that are currently struggling, Sim said it’s an issue of funding.

“I’m not promising everything to all people to pander to votes, but there is a funding issue,  – particularly around safety, police, and sanitation.”

However, “there are so many solutions, especially if we work in partnership with the private sector as well for these events who could do things like lend sponsorship to them.”

From a city perspective, “whatever we can do to facilitate these events, we will.”

Noting that the city’s budget has doubled in the last 10 years, but the population hasn’t, Sim said the city will “get its fiscal house in order and we can allocate resources to find a way to get some of these events done.”

On Vancouver’s future and “brand”

When it comes right down to it, Sim said he sees Vancouver as “a city of the future,” but one that also doesn’t forget its heritage. “We have all these great, eclectic neighbourhoods and we should protect those neighbourhoods.”

That being said, “there’s no reason why we can’t be a world leader in technology.”

He noted that he doesn’t even think of technology as a separate industry anymore, “because every company” is a technology company.

“When I look at what’s possible… I was in Dubai last fall and they have a whole innovation centre there and anyone who’s working on anything interesting is asked to come to Dubai, where they are then provided with office space and they incubate them and create this ecosystem,” he said. “We can do that here – we can build an ecosystem here.”

Noting that a party takes on the flavour of its leader – in this case the NPA – Sim said that “anyone who knows me knows I’m fiscally responsible, but socially, very progressive.”

If he’s elected mayor, decisions will be made with “a lot” of empathy.

“This isn’t a right or left issue,” he said. “It’s a Vancouver issue and I’m not going to divide the city for political gain.”