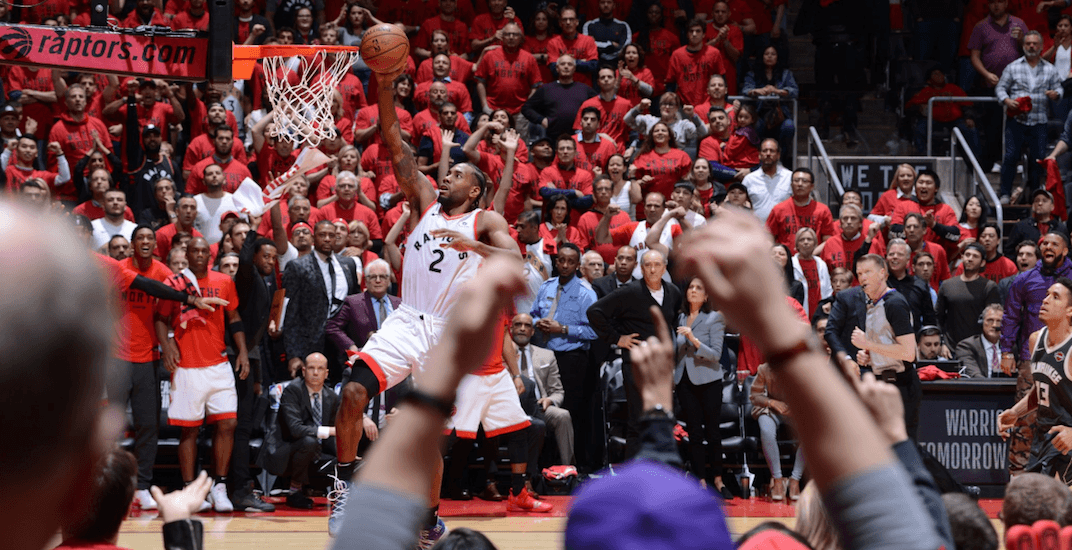 It’s easy to forget now, but when Ujiri pulled the trigger on a deal to bring Kawhi Leonard to Toronto — sending DeMar DeRozan the other way — it was met with mixed reactions from Raptors fans.

We ran a poll the day the trade went down, asking simply: “Do you like this trade for the Raptors?” Nearly four out of every five people chose “no.”

It was reported that Leonard had “no desire” to play in Toronto, while DeRozan didn’t hide the fact that he felt betrayed.

There was concern about whether Kawhi’s heart would be in it for the Raptors, not to mention worries about his health given he had just missed nearly an entire season with the San Antonio Spurs.

But the biggest worry of all was Kawhi’s long term future with the Raptors. A free agent at season’s end, his desire to play in Los Angeles is well known.

The Raptors had one season to change his mind — to convince him to re-sign with the team. If he left, the trade would backfire… right?

Somehow, Kawhi has been better than advertised. He set career-high averages in points (26.6) and rebounds (7.3). He’s been even better in the postseason, dropping 31.4 points and 8.4 rebounds per game — both career playoff highs.

#WeTheNorth Kawhi Leonard is the 14th player in NBA history to average 31.0 points per game on the road in a single postseason (minimum 8 games)

No one can question his heart, as he grinds through playoff basketball and excels — even at less than 100% health.

With Leonard leading the way, the Raptors have now made it further than ever before in the franchise’s 24-year history. They’re one win away from the NBA Finals, and have a remote chance at a championship.

And it’s all because of Kawhi.

Without their new superstar, none of this happens. The Raptors certainly wouldn’t have beaten the Philadelphia 76ers, nor would they stand a chance against this Milwaukee Bucks team. Without Kawhi, there’s no buzz this season. There’s no sense of hope.

So even if their playoff run goes off the rails, Maple Leafs style, it has to be said: the trade was worth it. As good as DeRozan is as a player — and he is an All-Star calibre player- – Leonard has taken the Raptors to a place where anything seems possible.

Even if this series gets away from the Raptors, even if Leonard leaves for the Lakers or Clippers in the summer, it was worth it.

So even if they don’t win another game — even if they have to rebuild in the summer — at least Ujiri gave his team a chance at greatness.

At least we got to dream.