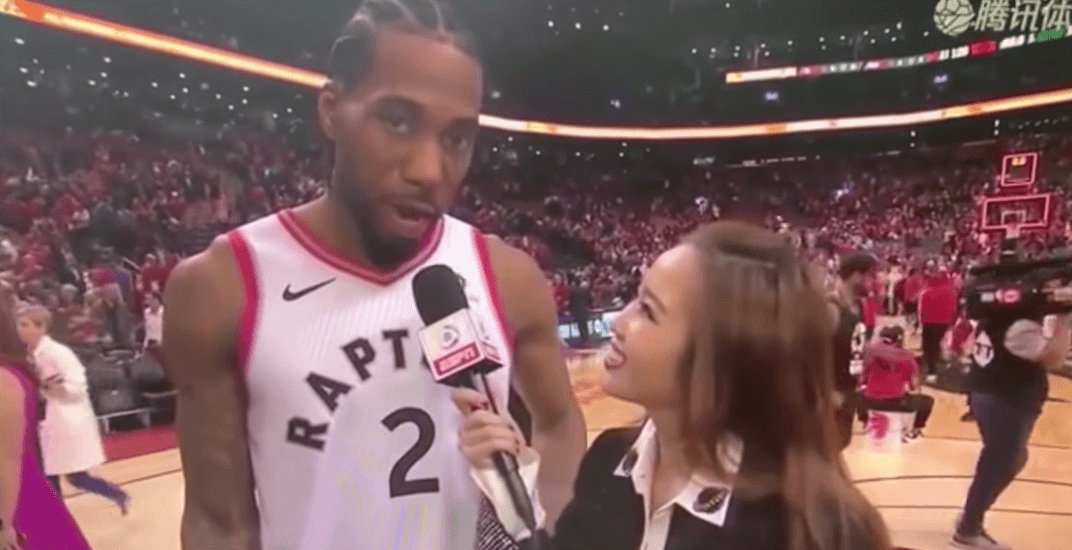 Kawhi Leonard told us he was a fun guy.

In fact, it was the first thing he said at his introductory media conference back in September.

Kawhi litereally has a shirt that says “Fun Guy.” Protect this man at all costs. pic.twitter.com/RqRTdn8cbU

Now with the t-shirt to prove it, it sure has been fun for the Toronto Raptors with Kawhi around.

Leonard actually had a fairly quiet night by his standards on Tuesday, scoring 19 points in just 34 minutes during the Raptors’ 120-102 blowout win over the Milwaukee Bucks in Game 4.

But what you didn’t see on the TSN broadcast in Canada was an interview Kawhi conducted in Mandarin.

It takes some serious talent to get an interesting answer out of the quiet Raptors’ superstar, but ESPN China reporter Coral Lu accomplished just that.

Lu asked Kawhi if there was anything he wanted to say to all the fans back in China, given it was his first time on camera speaking to a new audience.

And that’s when we learned Kawhi knows how to speak a little Chinese.

“Ni hao,” Leonard said, staring directly into the camera with his voice as monotone as ever. Looking back at Lu with a blank stare, she couldn’t help but crack up.

You can hear Leonard checking with Lu off-camera, asking: “is that right?”

After all my questions, I asked Kawhi if he has anything to say since it’s his first time being with us on NBA in China. Kawhi Leonard thought about it and said with his typical smile “Ni Hao… is that right?” 😂 I have to say, he tried his best @raptors #toronto #raptors #torontoraptors #espn #china #basketball #nba #nbaplayoffs #easternconference #kawhileonard

“Yes, that’s ‘hi,'” said Lu, before continuing on with the broadcast.

“I have to say, he tried his best,” Lu wrote on Instagram after the game.

Ni hao means “hello” in Mandarin, but the literal meaning is “you good,” which is ironic because well… he good.