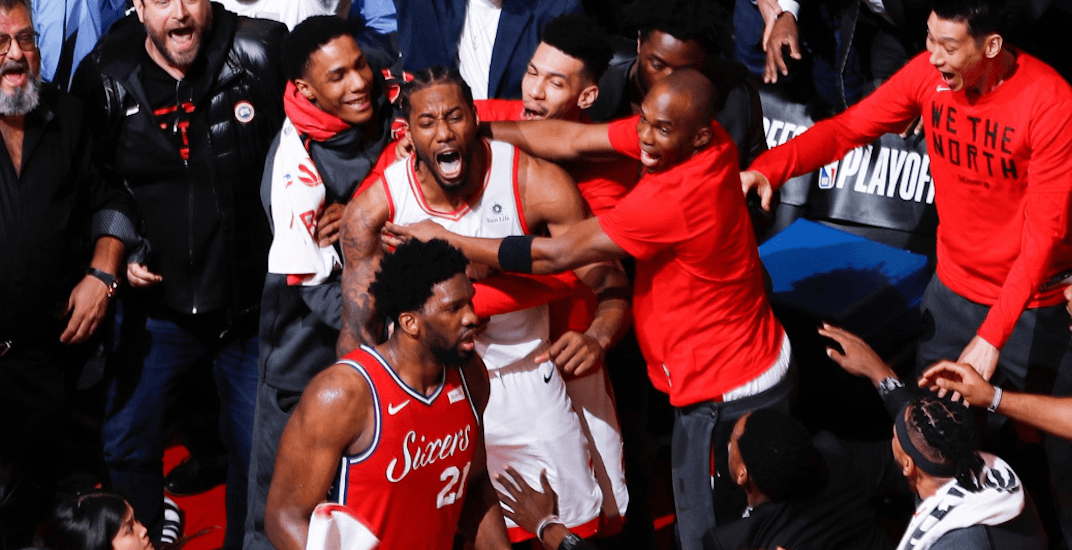 The Toronto Raptors’ Game 7 victory on Sunday night was incredible for a number of reasons — and not just from a purely Canadian-centric point of view.

The greatest moment in Raptors history — if not Canadian basketball history — Kawhi Leonard’s buzzer-beater capped off an incredible 41-point game, and an even more impressive series.

It’s one for the history books.

Kawhi Leonard's jumper is the first game-winning field goal at the buzzer in a Game 7 in #NBAPlayoffs history! pic.twitter.com/gSTbqRHX81

Kawhi’s buzzer-beater was like a scene from a movie, except if Hollywood had scripted it, it wouldn’t have been believable.

With time ticking down, the Raptors’ superstar threw up a long-range jump shot just before the buzzer sounded.

After bouncing off the rim four times, it went in.

The 133rd Game 7 in NBA history, remarkably, this was the first time one was decided by a buzzer-beating shot.

When you get mentioned in the same breath as Michael Jordan, you know you’ve accomplished something truly special.

With 243 points compiled during the seven-game series against Philadelphia, Kawhi put together the third-highest point total in NBA playoff history. It was the best performance in a playoff series since Jordan in the 1993 NBA Finals.

Kareem Abdul-Jabbar’s 260-point series in 1977 is the all-time greatest.

Players in #NBAPlayoffs history with 41 Points, 8 Rebounds & 3 Steals in a Game 7

Kawhi’s highest single-game point total came in Game 1 when he scored 45 points. His lowest output came in Game 5, when he tallied 21 points during a Raptors blowout victory. Leonard now owns the franchise record for most consecutive 20-point playoff games, scoring 20+ in all nine games for the Raptors this postseason.

The most famous shot in Raptors history before Sunday night was Vince Carter’s Game 7 shot at the buzzer in 2001.

Everyone is comparing that shot to Kawhi’s given the stunning similarities between them.

Both shots were taken by a Raptors superstar from just inside the three-point line in the corner. Both shots came against the Philadelphia 76ers in the second round with the Milwaukee Bucks waiting to play the winner in the Conference Finals.

Kawhi’s shot came at home with 4.2 seconds left. Carter had 2.0 seconds to work with on the road.

Carter’s shot hit the rim and went out. Leonard’s bounced four times and went in.

Kawhi is just the second player in NBA playoff history to hit a game-winning buzzer beater in a winner-take-all game. The only other player to do it is Michael Jordan, who hit what’s now known as ‘the shot’ in Game 5 of a best-of-five first-round series against the Cleveland Cavaliers in 1989.

It’s one of the most iconic shots of his career.

While Kawhi didn’t put up the most points ever in a Game 7, he did set an NBA scoring record.

#WeTheNorth Kawhi Leonard sets NBA record for highest % of a team's points in a Game 7 victory (44.6%)

The Raptors played just seven players in Game 7, with only Serge Ibaka and Fred VanVleet coming off the bench. Ibaka finished second on the team with 17 points, while Pascal Siakam (11) and Kyle Lowry (10) were the only other Raptors players to finish with double-digits in points.