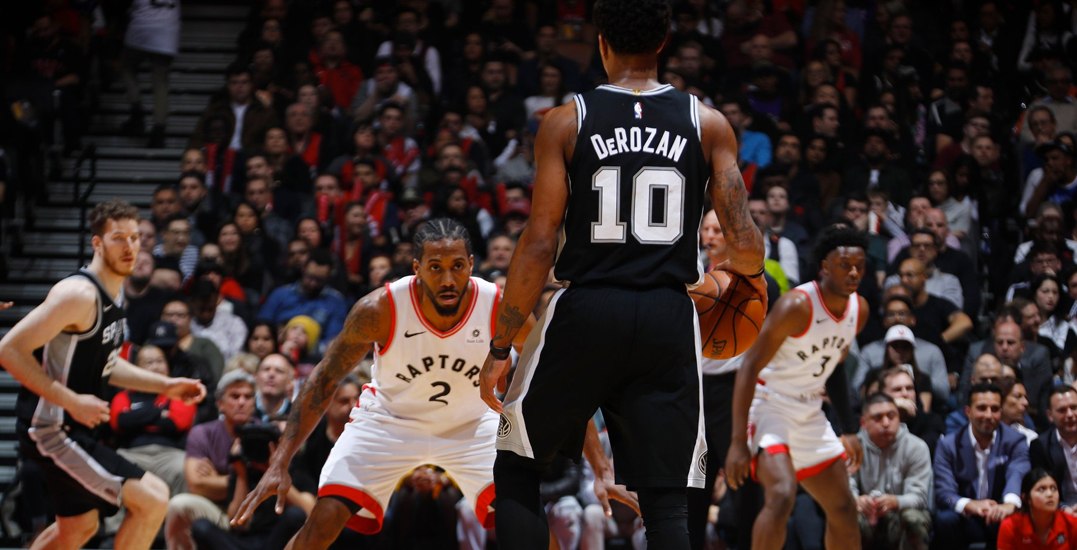 The most fitting end to a thrilling return.

When it came down to the final seconds in a nail-biter between the Toronto Raptors and the San Antonio Spurs, the spotlight was on the two superstars who swapped places last summer.

With just under 20 seconds on the clock and Toronto trailing 117-116, Kawhi Leonard and Kyle Lowry met former Raptor, DeMar DeRozan, at half court with a double team.

The @Raptors turn DEFENCE in to OFFENCE! #WeTheNorth pic.twitter.com/VK6IyU4Oaz

DeRozan slipped and Leonard’s claws scooped up the ball, running it all the way back for the go-ahead dunk which capped a 25-point night. That would prove to be the difference maker as the Raptors closed out the game for the victory by a score of 120-117.

Along with Leonard’s 25 points, five other players scored in double figures for Toronto. Pascal Siakam had 22 points, Kyle Lowry and Danny Green had 17 apiece, Serge Ibaka finished with 13 and newcomer Jeremy Lin chipped in with 11.

DeMar DeRozan led all Spurs with 23 points, eight assists and four rebounds, including an unbelievable 360 lay-up in the lane.

The game had a incredible atmosphere as it marked the first time that DeMar DeRozan has played in Toronto since being traded for Kawhi Leonard this past summer and Raptors fans showed him the love with a massive standing ovation.

After the game, DeRozan told the media he was honoured about the fans’ reception. He said it was, “definitely humbling, beyond gratifying and I appreciate it… Walking off the floor hit me more than anything.”

Raps fans also got a glimpse of the lost bromance between DeRozan and Lowry after the final whistle, as the two embraced at centre court.

Kyle x DeMar@Raptors win a close one in Toronto! pic.twitter.com/BkJFSwV1cA

DeRozan did have some comedic post-game words about his friend Lowry, however.

DeRozan said he was seeking out Lowry on switches… "but Kyle's fat ass know how to guard me obviously."

With the win, Toronto is now riding a seven-game winning streak and their record improves to 44-16 on the season. They will be back in action on Sunday against the Orlando Magic.