DeMar DeRozan’s impact on the Toronto Raptors is undeniable.

For nine seasons, DeRozan gave his heart and soul to the City of Toronto, becoming arguably the greatest Raptor of all time in the process.

His spirited tenure with the squad, however, ended unexpectedly last summer when he was traded to the San Antonio Spurs in exchange for Kawhi Leonard. Fast forward seven months and DeRozan is gearing up for his return to Scotiabank Arena on Friday night, marking the first time as a pro he will play north of the border in a different uniform.

With fans preparing to be reunited with Deebo, we look back at six of DeRozan’s best moments with the Raps.

1. The keys to the franchise

Back at the 2009 NBA Draft, the Raptors made a selection with the ninth overall pick that would ultimately define their next nine years. Playing in the shadow of All-Star Chris Bosh in his rookie season, it wasn’t until 2010 when DeRozan took the steering wheel with just one tweet.

The tweet was sent in response to Chris Bosh leaving in free agency to join LeBron James and Dwayne Wade down in Miami. From this tweet on, the Raptors were his team. Little did fans know at the time, he would be the guy to take the franchise to levels it had never been before.

DeRozan truly did have ‘us’ from the time this tweet was sent, right up until the time he was traded.

2. Trip to the Conference Finals 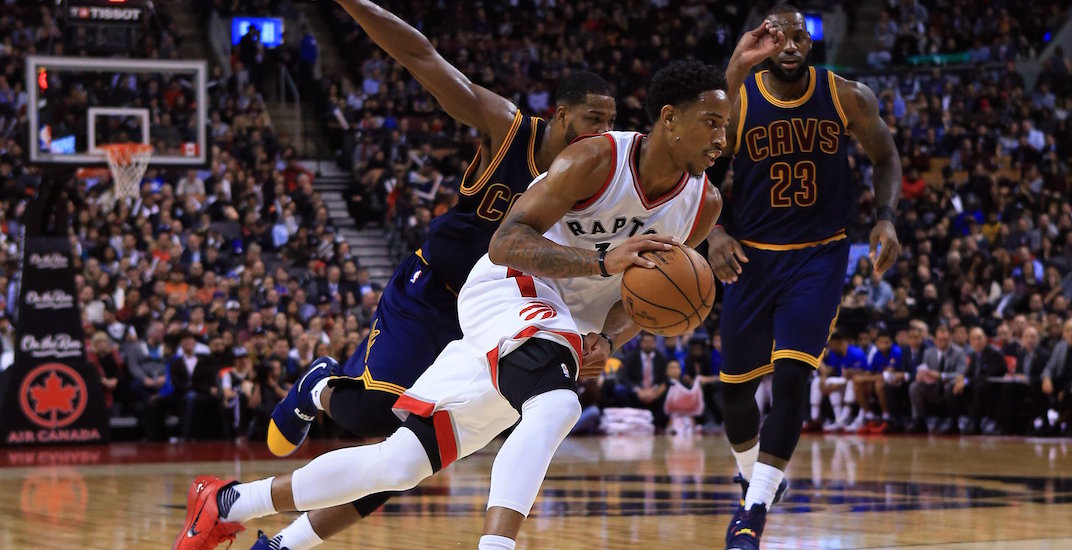 DeRozan had put the team on his back getting the Raps into the playoffs for both 2014 and 2015, but he wasn’t able to successfully lead them to a seven-game series victory until 2016.

In round one, led by DeRozan’s 30 points, the Raptors defeated the Indiana Pacers in Game 7 to win their first playoff series in 15 years. He wouldn’t stop there.

Round 2 against the Miami Heat was another series that went the distance and in Game 7, in front of a home crowd, DeRozan came up big once again.

He put up 28 points en route to the win, securing a birth in the Conference Finals and officially making it the greatest season in franchise history.

Although the magic would end there and Toronto would lose in six games to LeBron’s Cavaliers, it was a moment that fans won’t soon forget.

When playing at such an elite over the course of several seasons, milestones will be hit, accolades will be achieved, and iconic performances will come in bunches.

DeRozan’s resume speaks for itself including his two All-NBA recognitions, four All-Star appearances and three Player of the Month awards while leading the franchise in games played (675), minutes played (22,986) and points scored (13,402).

When it comes to an individual performance, however, nothing stands out more than his 52-point performance on New Year’s Day 2018, where he absolutely carved up the Milwaukee Bucks to amass the single-game franchise record in points.

DeRozan was a highlight machine during his time in Toronto, but one of the most memorable plays was against the Detroit Pistons at Little Caesars Arena. With the Raptors trailing 112-111 and under 10 seconds left on the clock, it was DD10 time.

DeRozan went coast-to-coast, took flight and pulled off a posterizing dunk that is sure to be on highlight reels from now until forever.

The Raptors won the game and Pistons forward Anthony Tolliver, who was on the receiving end of the dunk, was never quite the same again. Fans also made sure to update Tolliver’s Wikipedia page as a friendly reminder.

Although it’s much more than just one moment, the bromance DeRozan had with teammate Kyle Lowry is something that Raptors fans remember fondly. The two were a 1-2 combo on the hardwood for seven seasons, but spent many hours off-court building an inseparable, endearing bond.

Over the years there were countless media photobombs, interrupted interviews, and great quotes about each other.

It even got to a point where their relationship made Golden State Warriors forward Kevin Durant jealous.

"I’m jealous of their relationship, the way they get along with each other and the way they play together." – Durant on Lowry and DeRozan pic.twitter.com/rcFlDBcOJd

The trade was tough on both guys and while the two will surely remain close friends, DeRozan’s departure marked the end of an era that included these near-daily hijinks.

6. Opening up about depression

One of the most memorable things DeRozan did was start a conversation. That conversation was bigger than basketball and it all started from a tweet.

This depression get the best of me…

By opening up on his depression and taking the bold first step, DeRozan got the ball rolling on a mental health discussion in sports and the struggles that athletes face. Since then, other athletes have come forward and the NBA has initiated a new mental health program for its players.

Over nine years, the kid from Compton made the City of Toronto fall in love with him and he loved the city right back – a bond that runs deeper than basketball.

Although DeRozan’s departure was received with mixed emotions, when all is said and done, you can expect No. 10 will be hanging from the rafters at Scotiabank Arena and, if you have any doubts, the resume below should speak for itself.