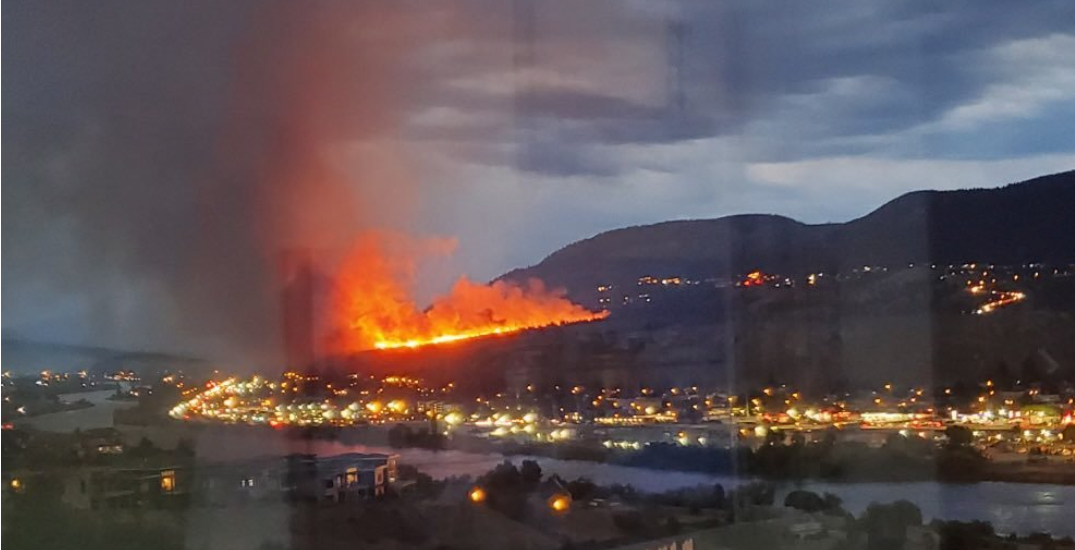 A fire is under control after forcing evacuations near the City of Kamloops last night.

Lightning strikes ignited two “significant” fires in the hills below the community of Juniper Ridge, the City said on Friday morning.

The rapidly spreading flames threatened homes, resulting in evacuations of parts of Valleyview and Juniper Ridge.

Photos shared on social media show the fire tearing through the neighbourhoods as residents flee.

Thought I’d be safer in #Kamloops for a couple of nights, then this broke out and had to evacuate with friends. Thankfully it is under control. #BCWildfire #heatwavebc #HeatWave2021 #iamdone pic.twitter.com/OhyVpwrY1q

My family and I are safely out of our neighbourhood which has been evacuated. #JuniperFire #Kamloops #BCfires pic.twitter.com/GzjFSRPsD4

Across from the juniper fire, no rain, slight wind and lightning is still hitting every now and again. @RadioNLNews #Kamloops pic.twitter.com/7Tus9Fc5se

This was taken 10 mins ago from my moms dining room in Juniper Ridge. Lightning strike. I’m currently stuck on Nechako trying to evacuate. No traffic is moving. #kamloops #BCWildfire pic.twitter.com/Las1YtlHko

We’ve been impacted by the #Kamloops fires but are safe with our family. Bring the rain! 🌧🌧 photos are from 9:30/9:40pm at Sunset Lane #crazytimes pic.twitter.com/F3e9412RKF

Scary stuff in Kamloops tonight
Everyone is okay and fire now under control #bcfire #kamloops pic.twitter.com/S2n6t7ZReb

As of 7 am local time, the fire is listed as under control, pending an air assessment by BC Wildfire Service.

Kamloops Fire Rescue and BC Wildfire Service will continue to assess and fight any hot spots that arise throughout the day.

Evacuation orders remain in place for homes on the north side of Capilano Drive and Nechako Drive east of Qu’Appelle Boulevard.

The City of Kamloops thanked first responders for their “heroic” efforts, noting the steep terrain added to the difficulty of fighting the flames.

“No structures have been lost in the fire,” the City said. “The number of lives saved is priceless.”