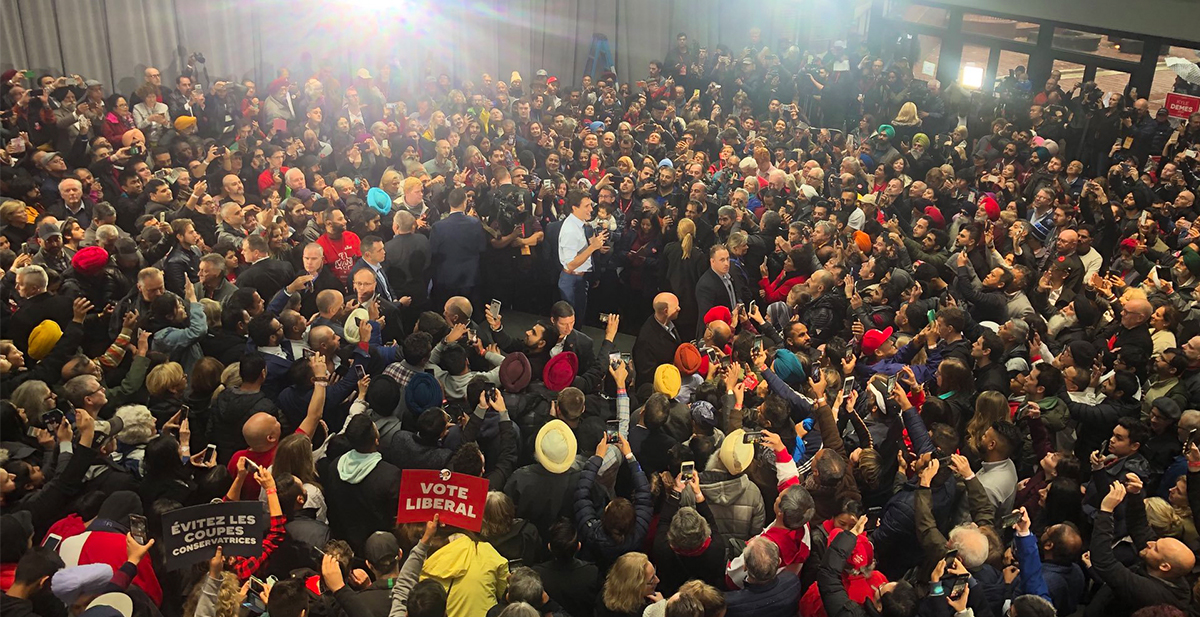 Jack Raymond had only just made up his mind on who to vote for.

Standing among the crowd at the Woodward’s Atrium in downtown Vancouver on Sunday afternoon, Raymond and hundreds of people were waiting to hear from Liberal Leader Justin Trudeau, who was making his final pitch to voters on a whirlwind trip through British Columbia.

“I was waiting till the last minute to decide,” said Raymond, who was there with his family.

The NDP earned his vote in the 2015 federal election, but this time he’s voting for Taleeb Noormohamed, the Liberal candidate in Vancouver Granville, where ex-cabinet minister Jody Wilson-Raybould is seeking re-election as an Independent.

“I think the Liberals and the NDP have enough of their platform in common for me to feel comfortable,” said Raymond, a scientist who listed evidence-based policy-making and the fight against climate change as important issues for him in this election.

Those voters on the so-called progressive end of the political spectrum – not necessarily die-hard Liberals, but definitely interested in stopping the Conservatives – have been a major target of the messaging from the Liberal campaign.

All the messaging in the world, however, matters little if the people who hear it do not actually head to the polls on Monday, so Trudeau spent his final day highlighting the need for local campaigns to get out the vote.

“We’ve got a great democracy and we need to make sure we are participating in it,” Trudeau said as he visited the campaign office of Patrick Weiler, the Liberal candidate for West Vancouver-Sunshine Coast-Sea to Sky Country.

“We are taking nothing for granted,” Trudeau said Sunday morning.

The riding is one of many battlegrounds in British Columbia. Liberal Pamela Goldsmith-Jones, the former mayor of West Vancouver, won the riding in 2015. Previously, Conservative MP John Weston held the seat and before that Blair Wilson, a Liberal who switched to the Greens ahead of the 2008 election.

Goldsmith-Jones, who has been supporting Weiler’s campaign, said the Liberals, Conservatives, NDP, and the Greens all have support in the riding. She said her 2015 victory came from a coalition of progressive voters.

She was asked what a loss for the Liberals here would mean.

“It could symbolize what I think we are seeing in this election across the country, which is difficulty choosing one way,” she said.

The Liberals have urged progressive voters to rally behind their party as the only way to stop Conservative Leader Andrew Scheer from becoming prime minister.

But the increased popularity of the NDP and Greens, as well as disappointment with the Liberals after four years in power, is threatening their hold on progressive voters.

The Liberals argue that voter intentions do not always translate into ballots cast, which is one reason why their efforts to get out the vote in these final days could be crucial.

The Liberal campaign made several stops in and around Vancouver on Sunday, including in ridings held by New Democrats, before heading to Victoria for Trudeau’s last rally.

“We ended the campaign four years ago in North Vancouver at an incredible rally like this where we picked to move forward with a different government than what Stephen Harper had delivered us for 10 years,” Trudeau said at the rally.

“So we made a different choice, we picked a better government, one that was focused on investing in you, instead of cutting,” Trudeau said. “Investing in your communities instead of giving tax breaks to the wealthiest, and chose to fight climate change to build a better future both for the environment and for the economy, because BCers know they go together.”

At the rally in Vancouver, Raymond said he is disappointed with the Liberals for having walked away from their promise to bring in electoral reform in time for this election.

He also noted the current climate change policies are not enough to have Canada meet its target of reducing greenhouse-gas emissions by 30% below 2005 levels by 2030, but thinks the Liberals took a positive first step.

His wife, Sarah Robertson, is also voting for the Liberals – and volunteering for them too.

“I don’t want the Conservatives to be in, at all,” she said.

Scheer, NDP Leader Jagmeet Singh, and the Greens’ Elizabeth May all spent the day in the province as well.