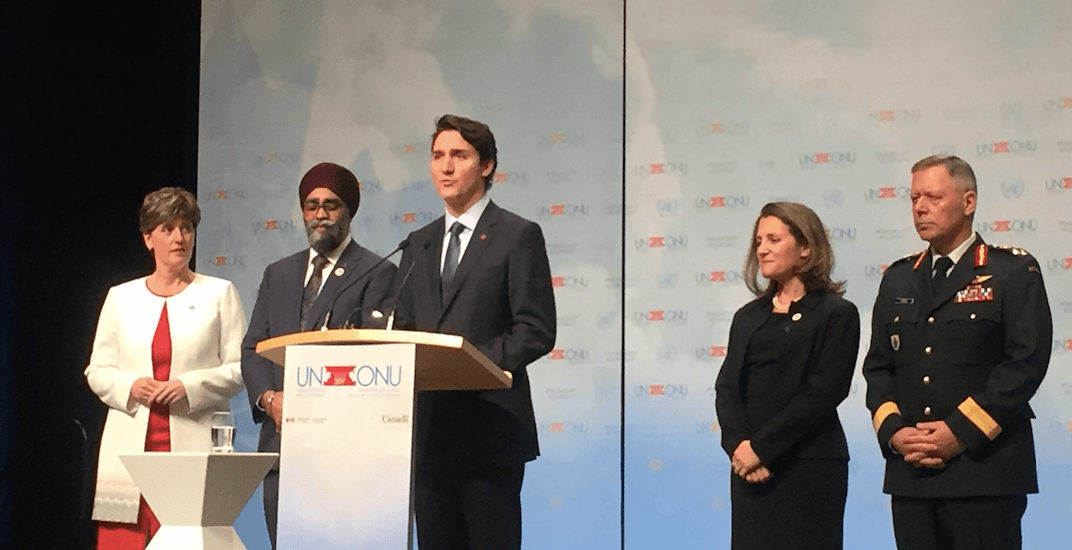 Prime Minister Justin Trudeau was in Vancouver today where he announced that Canada would be bolstering its peacekeeping roles and civilian protection measures.

Trudeau introduced the launch of the ‘Vancouver Principles on Peacekeeping and the Prevention of the Recruitment and Use of Child Soldiers’ during his opening remarks at the UN Peacekeeping Defence Ministerial Conference.

The Vancouver Principles work to identify early warning signs, take action to end the recruitment and promote the reporting of physical and mental violence against children.

During his address, Trudeau also spoke about the important roles girls and women play in peacekeeping.

He went on to introduce Elsie Initiative on Women in Peace Operations, in which Canada will work with partner nations to increase the involvement of women in UN Peacekeeping operations.

Lastly, Trudeau announced that Canada will be promoting the “Smart Pledge” which will encourage the more coordination and higher contributions to peacekeeping efforts.

“The nature of conflict has changed. So too have the demands of peace operations.”

As the first step working towards the Smart Pledge, Canada will look into contributing tactical airlift capability to the UN’s Regional Support Centre in Entebbe, Uganda.

“The nature of conflict has changed. So too have the demands of peace operations. Discrete offerings and one-off commitments have gotten us this far, but we won’t be able to deliver true, transformative change without a real institutional change,” said Trudeau in a statement. “Canada is prepared to help lead that charge. To rethink how we engage, not just where we engage.”

In a press conference following his address, Trudeau said bolstering Canada’s peacekeeping efforts is what the global community expects.

“The focus is on how Canada can best help,” he said. “That is what the world expects of us today.”

More than 500 delegates from more than 70 countries are attending the conference which wraps up today at the Vancouver Convention Centre.