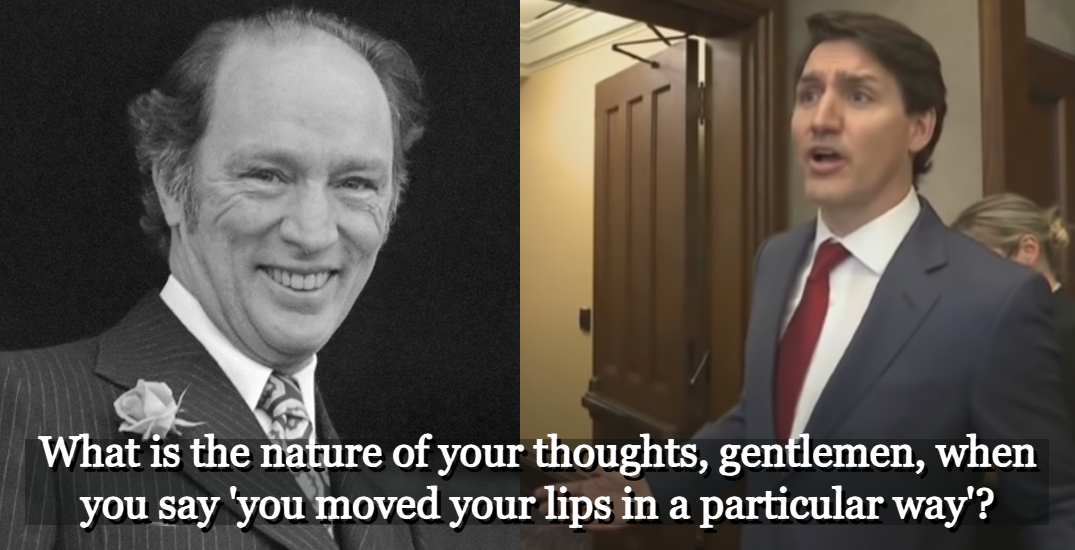 Things got a little too tense during the question period at the House of Commons today. Now, several opposition party members swear they heard Justin Trudeau utter the F-word.

Conservative House leader John Brassard spoke to reporters and alleged that the PM dropped the F-bomb while being questioned about Canadian military aircraft use in Ottawa amid the so-called Freedom Convoy demonstrations.

“The Prime Minister used an unparliamentary term. He dropped an F-bomb,” Brassard said in a comically matter-of-fact way. “Everybody in the first two rows across from the Prime Minister heard it.”

The PM was talking directly to conservative parliamentarian Kerry-Lynne Findlay. Suspiciously, the profanity cannot be heard on the audio record of the meeting.

“I don’t want you to necessarily say it, but was it the four-letter F-word?” a reporter asked Brassard.

“The Prime Minister has shown this type of emotion in the past, referring to other members of parliament as pieces of shit,” he added. “So it’s not surprising to me that he would say that word.”

From the sounds of it, it seems the PM allegedly used the F-word as an adjective — as in “Wow, this meeting’s f*cking boring” and not as in “F*ck you, I’m out,” to illustrate with a hypothetical example.

By the time one member demanded an apology, Trudeau had already left the premises.

In a video clip recorded afterwards, a slightly agitated Trudeau can be seen asking reporters, “What is the nature of your thoughts, gentlemen, when you say you move your lips in a particular way?” causing some audible laughter.

“What is the nature of your thoughts, gentlemen, when you say you move your lips in a particular way,” PM Justin Trudeau said as he responded to a reporter’s questions re: his alleged use of profanity during question period in the House of Commons.#cdnpoli pic.twitter.com/l0Xrenl7Xp

It might sound like nonsense if you don’t know the historical context. The question is a paraphrased throwback, something the PM’s father once said.

Over half a century ago, on February 16, 1971, then-PM Pierre Elliott Trudeau was accused of using a “four-letter word” in the House of Commons.

“I move my lips, and I use my hands, and I gesture in derision, but I didn’t say anything,” Pierre Trudeau had told reporters. “If these guys want to read lips […] that’s their problem. I think they’re very sensitive. They come in the House, and they make all kinds of accusations, and because I smile at them in derision, they come stomping out and go crying to mama or to television that they’ve been insulted or something?”

When reporters asked him for more clarity, Pierre Elliot said it was a lie and that he had not said anything.

“Did you mouth it?” asked one reporter.

“What does ‘mouth’ mean? Move your lips? Yes, I move my lips!” the prime minister exclaimed.

“And the words you’ve been quoted as saying — what were you thinking when you ‘moved your lips’?” reporters followed up.

“What is the nature of your thoughts, gentlemen, when you say ‘fuddle-duddle’ or something like that?” asked Pierre Trudeau in a moment etched in Canadian political history.

To see if history has really repeated itself, watch the 1971 clip here: